Slowly getting closer to kissing my ass

Meet Chy (pronounced Shy).  I think her face is beautiful. 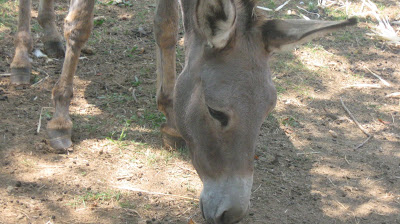 She arrived on Sunday.  The previous owners, delivered her to us, which was really nice since we don't have a horse trailer.  They backed up to our gate and with some coaxing and bribing with food Chy slowly took her first steps into her new home.

When I met her last week she took a little food out of my hand but wouldn't let me touch her and she was very nervous around me.  In the previous 5 months she had not let her owners pet her and she remained aloof.  You know me, I can't stand to have a pet that I can't love on but I knew I'd have to have patience.  I really am determined to milk her so touching her all over is going to be very important.  She's not due to have a baby for a few months yet so there's still time.

I let her meet the goats through the fence and they seemed a little nervous about having her nearby but they didn't freak out.  The turkeys wandered all around her legs and she ignored them.  Since then the goats have all met her and all appears to be going as planned.  Donkeys make good guardians for livestock and already she'd rather be with the goats than alone.   One of our neighbors has lost many chickens this year and just this week shot a coyote in his yard so I know they're around.

Look what else happened that first morning she was here. 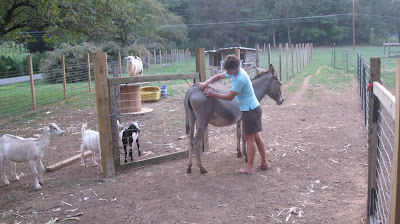 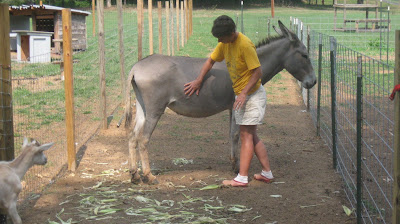 She'll let me scratch her back, neck and rump and stroke her face.  I think she likes me.  Of course, I've bribed her with treats.  All my animals are motivated by food.  I'm hoping it won't be long till she lets me give her a kiss on the nose.  Yesterday I bought her a halter and I plan to slowly introduce her to it so I can get it on her and teach her to lead.  Today I put the halter in her food pan so she had to touch it and eat around it.

For those of you who think I'm crazy about this milking-a-donkey idea read this.

Milk—it does the body good.
Human beings used to kill animals primarily for meat and hides; however, that changed with the advent of animal domestication around 8000 BC.  At that time, goats and sheep were domesticated in the Middle East and lived on a diet of grass. Farmers realized that animals could sustain themselves on an easily obtainable stock of food which was otherwise useless to humans, so they started experimenting with other uses for animal byproducts; hence human consumption of animal milk. Now, instead of simply hunting animals and getting one share of meat and skin, they capitalized on milk production and used the same animals for years.
There is evidence of humans drinking milk from many mammals, including goats, sheep, camels, donkeys, even water buffalo, but cow’s milk is by far the biggest industry for animal milk. Why? Because cows can produce nearly 40 liters of milk in one milking. In this world of quantity over quality, cow’s milk made the most sense.
But could it do better?
Milk produced by different animals has different compositions of protein, fat, and essential nutrients. Many studies have been conducted to test the breakdown of lipids and vitamin content in milk from different animals, and they found that donkey lactate is actually healthier than that of a cow and most closely resembles human milk. According to a study published inFundamentals of Dairy Chemistry (B. Webb, A. Johnson, J. Alford, AVI Publishing, 1974), cow milk contains 3.7 grams of fat per 100 grams while donkey milk only contains 1.72 grams. As America faces an increasingly concerning obesity epidemic, one has to wonder why nutritionists have not revisited something as easy as milk. The answer is simple: people are disturbed by the idea of drinking donkey milk.
Donkey milk surpasses a cow’s on many levels: less fat content, a much higher percentage of protein, and a higher concentrate of the essential vitamins found in milk. For example, donkey milk contains 60 times the amount of vitamin C found in cow milk. Perhaps the most important difference is the fact that donkey milk requires no pasteurization. Pasteurization is the process by which bacteria, protozoa, molds, and yeasts are destroyed by heating a liquid. Every ounce of milk produced on cow dairy farms must go through this process or risk being harmful to human beings. Needless to say, this is an expensive process. Donkey milk does not contain any natural bacteria, so it is absolutely safe to drink straight from the jenny! In fact, some studies have even shown that donkey milk contains immunoglobins which boost the immune system. Not enough research has been done on this topic to make solid statements, but donkey milk is potentially helpful for people with reduced immune system function, like cancer patients.
The oldest woman in the world died at 116 years of age and made a buzz in the media when her family attributed her long life span to consumption of donkey milk throughout her life. The Ecuadorian woman lived a healthy lifestyle otherwise, but it really makes you think! There are also legends that Cleopatra bathed in donkey milk to keep her skin youthful and beautiful; maybe she was on to something.
Where can I get it?
Donkey milk’s popularity is quickly growing in Belgium and France. Belgium’s Asinerie du Pays des Collines at the Chateau des Mottes, owned by Olivier Denys is not only the single existing donkey dairy farm in Belgium, but is also one of very few existing in the world. Denys knows that donkey milk is a “nutritional goldmine,” but he also realizes the limitations in mass production. Jennies, female donkeys, can only produce around two liters of milk per day over a span of three milkings, which does not really contend with the 40 liters churned out by cows in only one. Also, of his 84 donkeys, only 15 are ever producing at one time. Despite the hindrances in manufacturing, Denys says that production is increasing every year as popularity and support grows. Another plus that may start to change investor’s minds is that donkey milk completely cuts out the cost of pasteurization, which leaves more money for more donkeys.
Access to donkey milk in the United States is extremely limited. Donkey milk supplements are about as close as you can get without actually going out and milking a donkey yourself. The cosmetic industry is cashing in on the Cleopatra myth by selling soaps and lotions containing fractions of donkey milk, but the real nutritional benefits come from the actual consumption of fresh milk.
America is stuck in a nutritional rut, and the idea of drinking milk straight from a donkey’s teat is, let’s face it, disgusting for most people. But why is it any different than drinking milk from a cow? Because time and time again, society has drawn the lines and nobody has dared to break them.
The nutritional benefits of drinking donkey milk are clear; the only thing lacking is publicity and social acceptance.
Posted by kpannabecker and jpannabecker at Wednesday, August 11, 2010