I think this is the 4th or 5th year the animals begged for Halloween costumes.  It's a big job finding costumes that will fit a small kitty, an 800 lb pig and a mammoth donkey, but ALWAYS it's fun.  I took about 60 pictures and it's hard to narrow them down to the best ones.  I began with the easiest, dressing up Baxter.  He's just like Lex when it comes to costumes; a really good sport.  All I have to say is, "smile for the camera, Baxter", and he does. 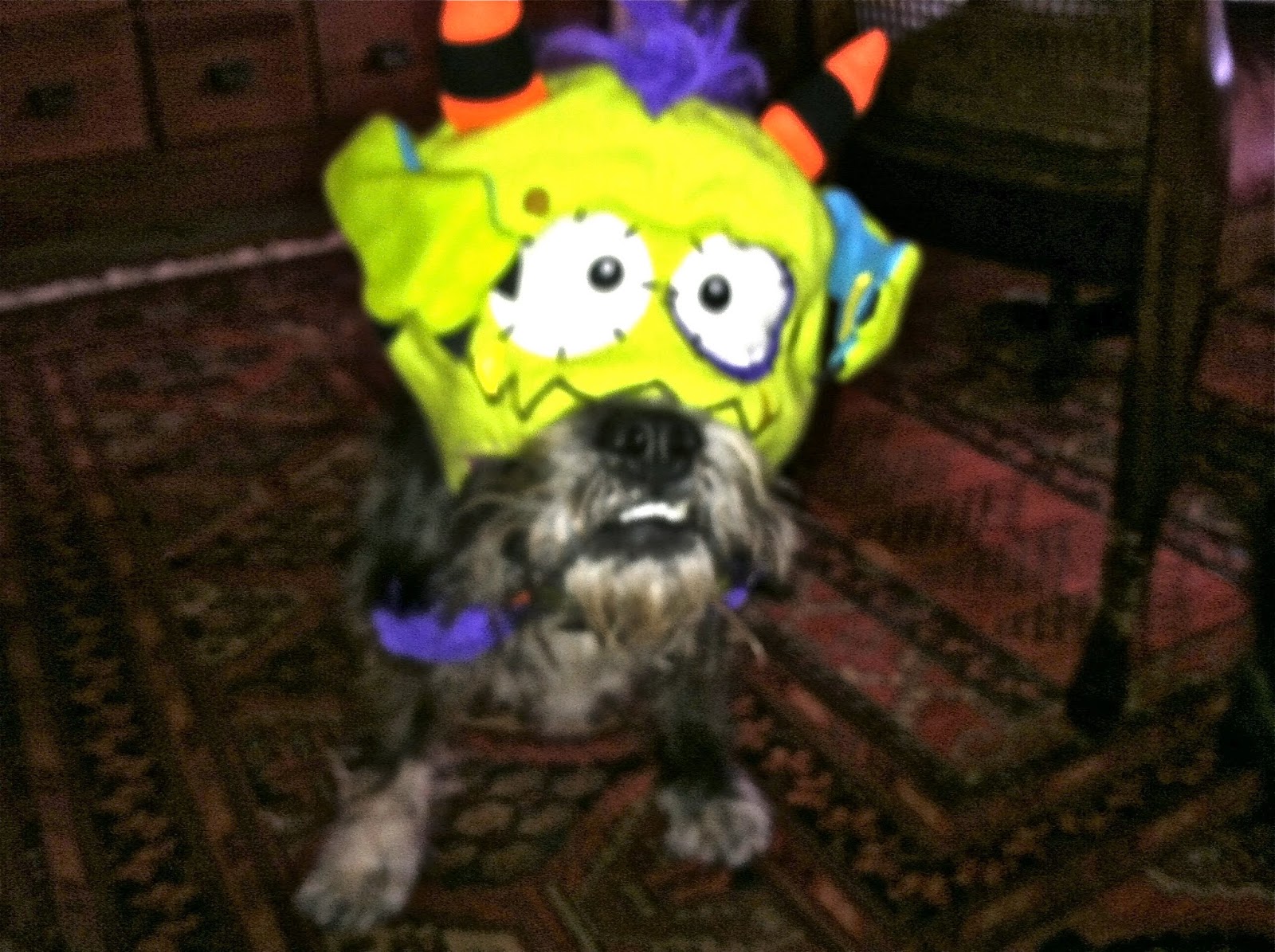 Now that Willy is older she's much more uncooperative.  She ran off with her costume in her mouth and that was that, so I'm posting a picture I took of her about a month ago when she was a sweet, well-behaved kitten who allowed me to abuse her. 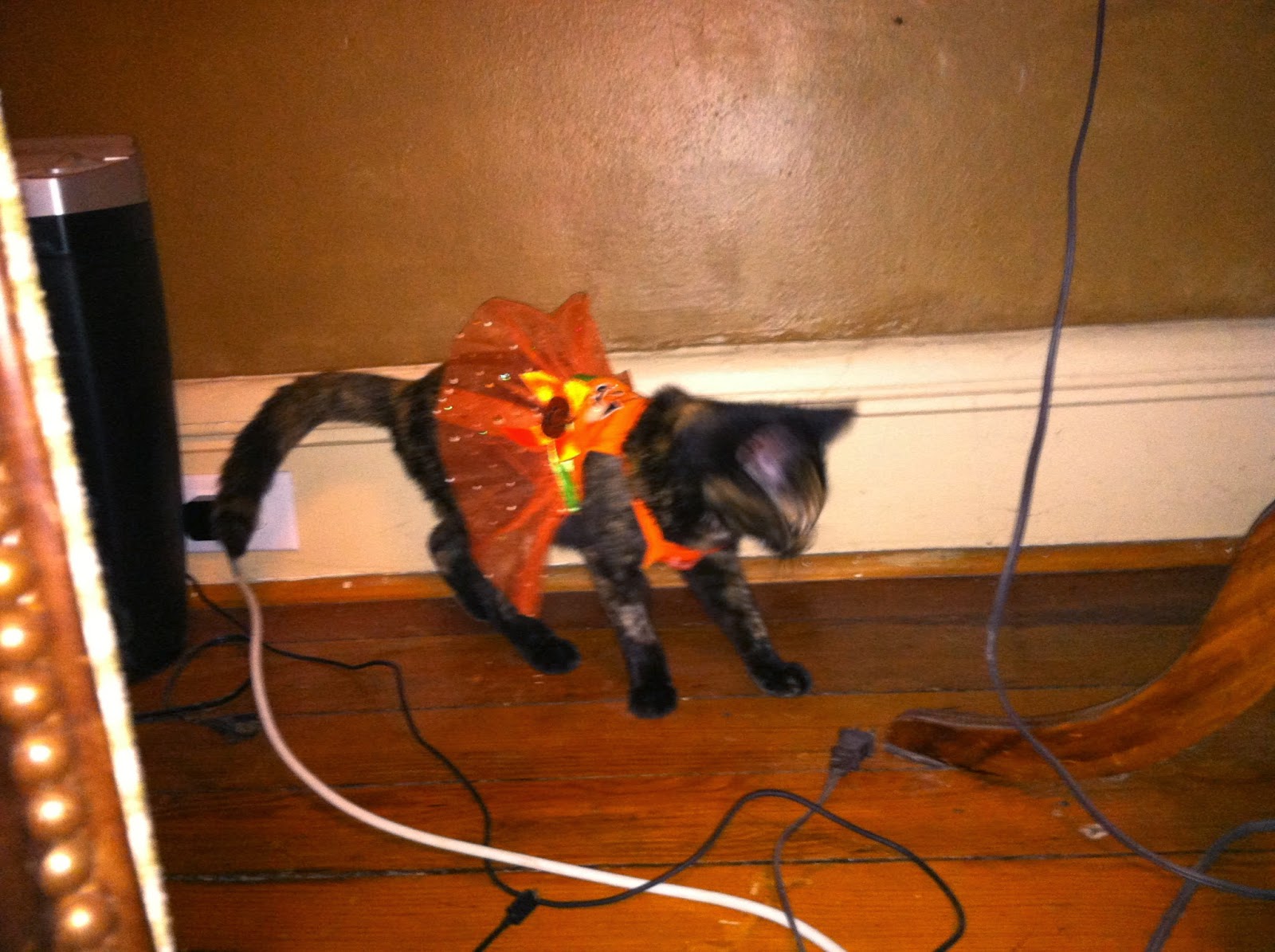 Pigs are always a challenge but Roxie has been in many photo shoots and knows how to work it.  She's no size 2 but she can pull off anything........because she's all about that bass, 'bout that bass, no treble (go ahead, you know you want to sing along), She's bringing booty baaaack.. 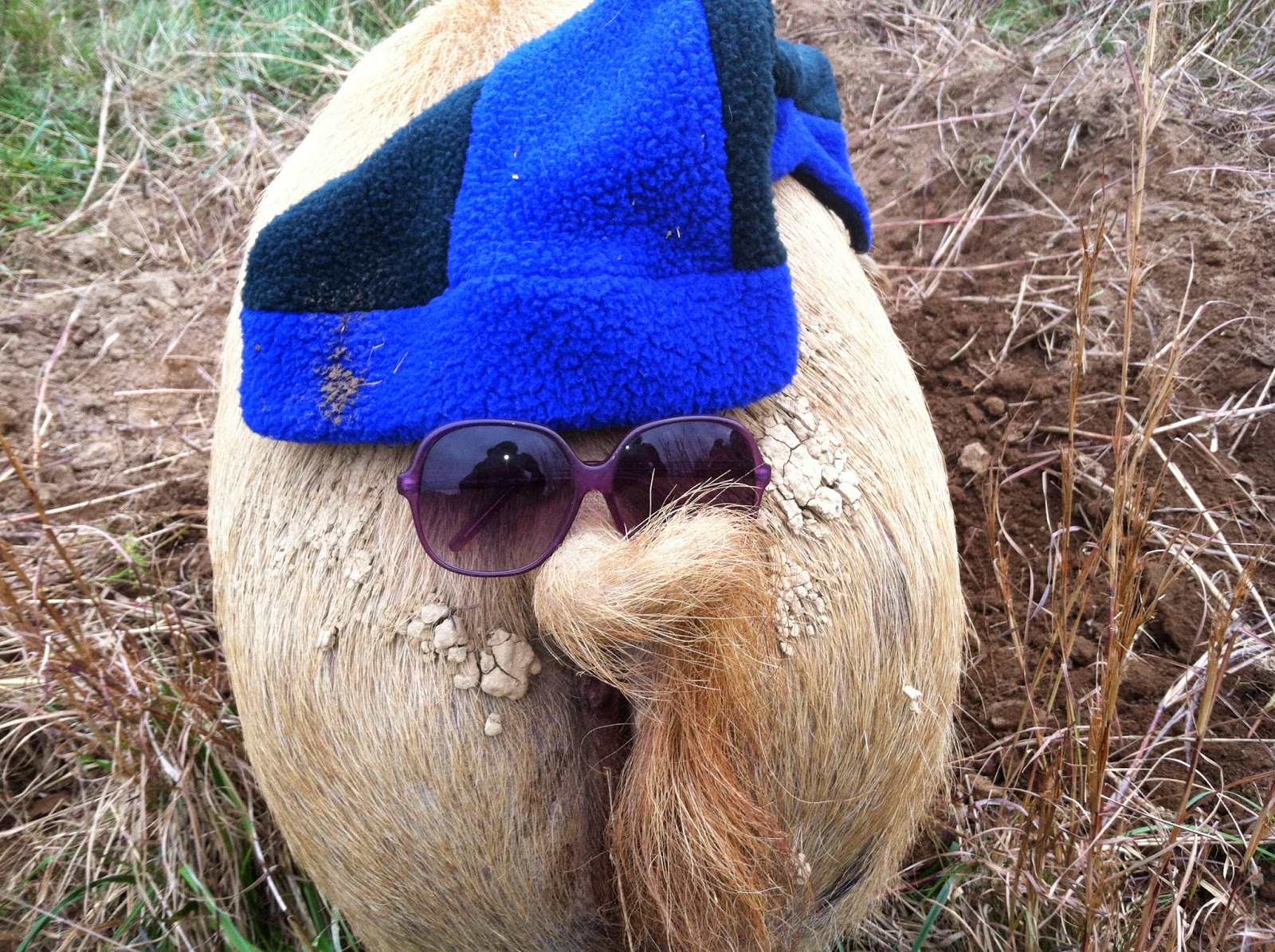 Willo and Jaz loved the attention and let me try on everything I had in my bags.  Piggy back ride, anyone? 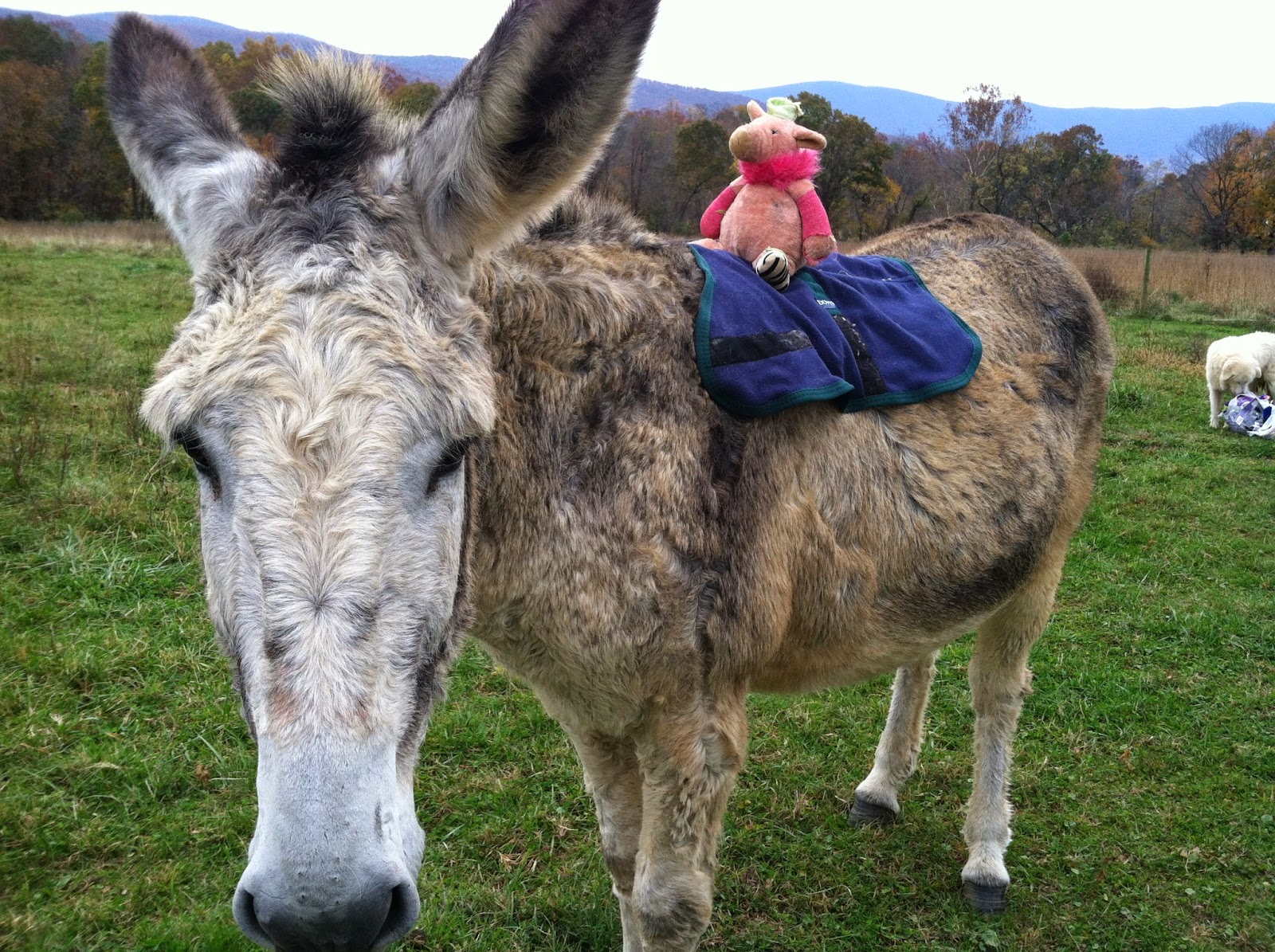 Darla wanted to play that game too. 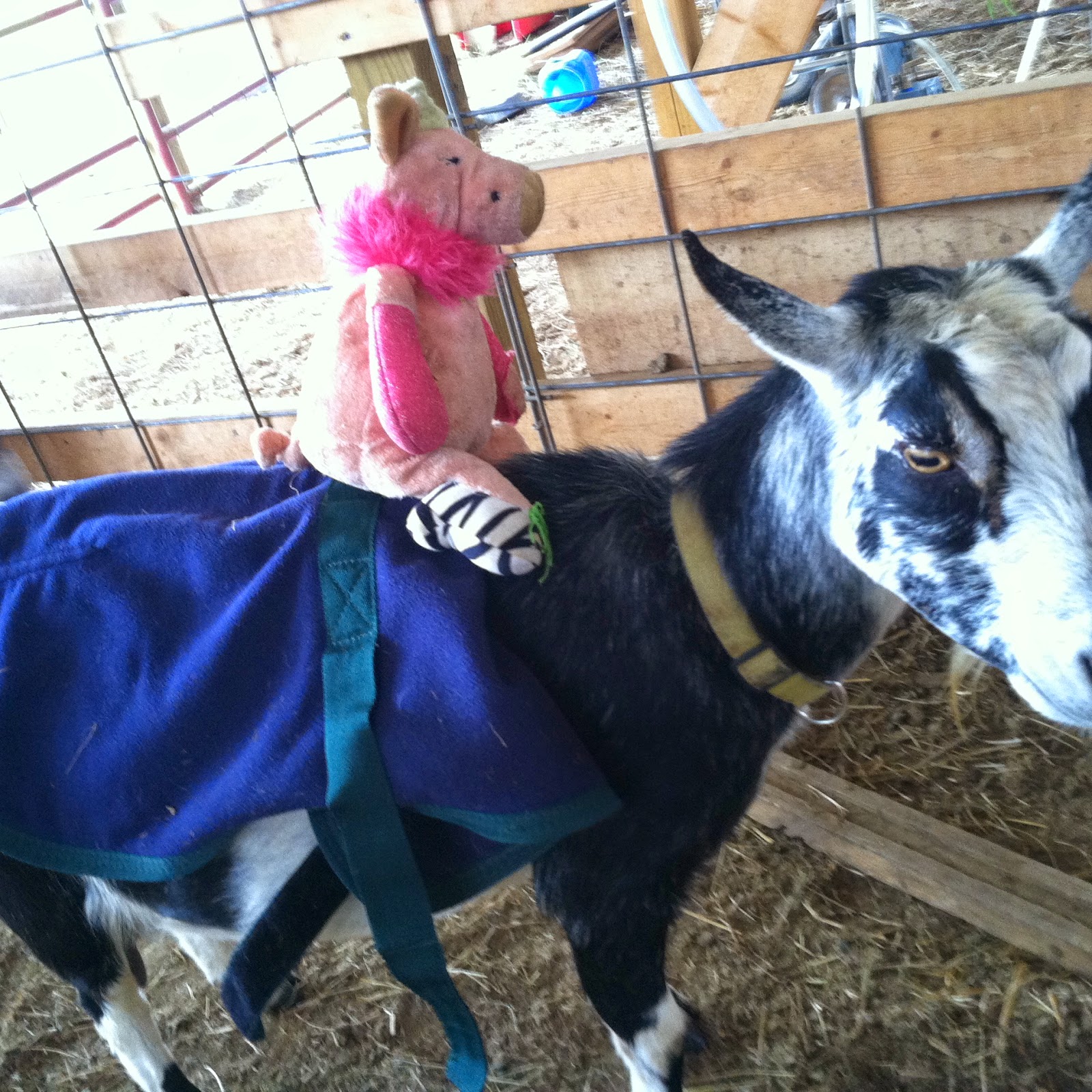 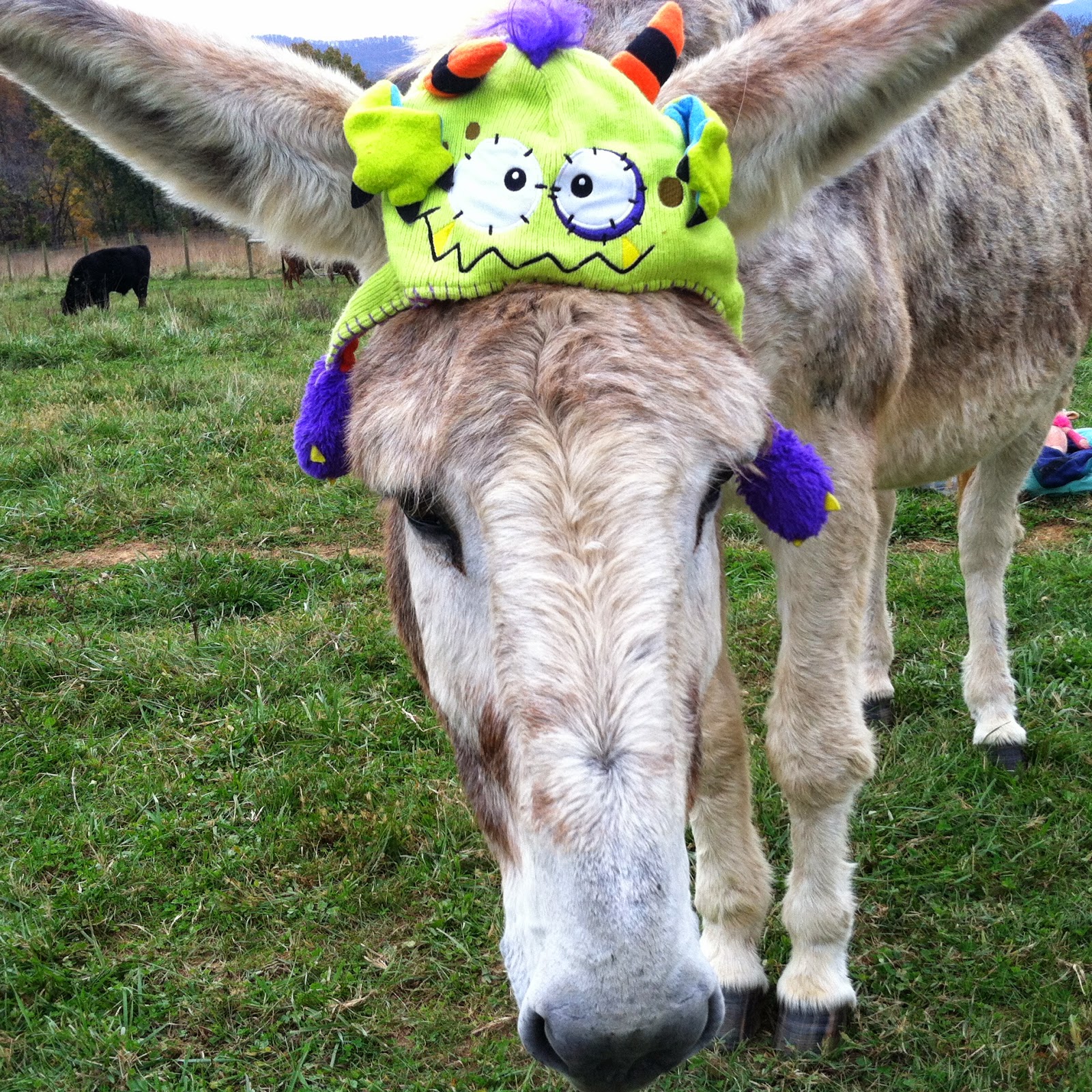 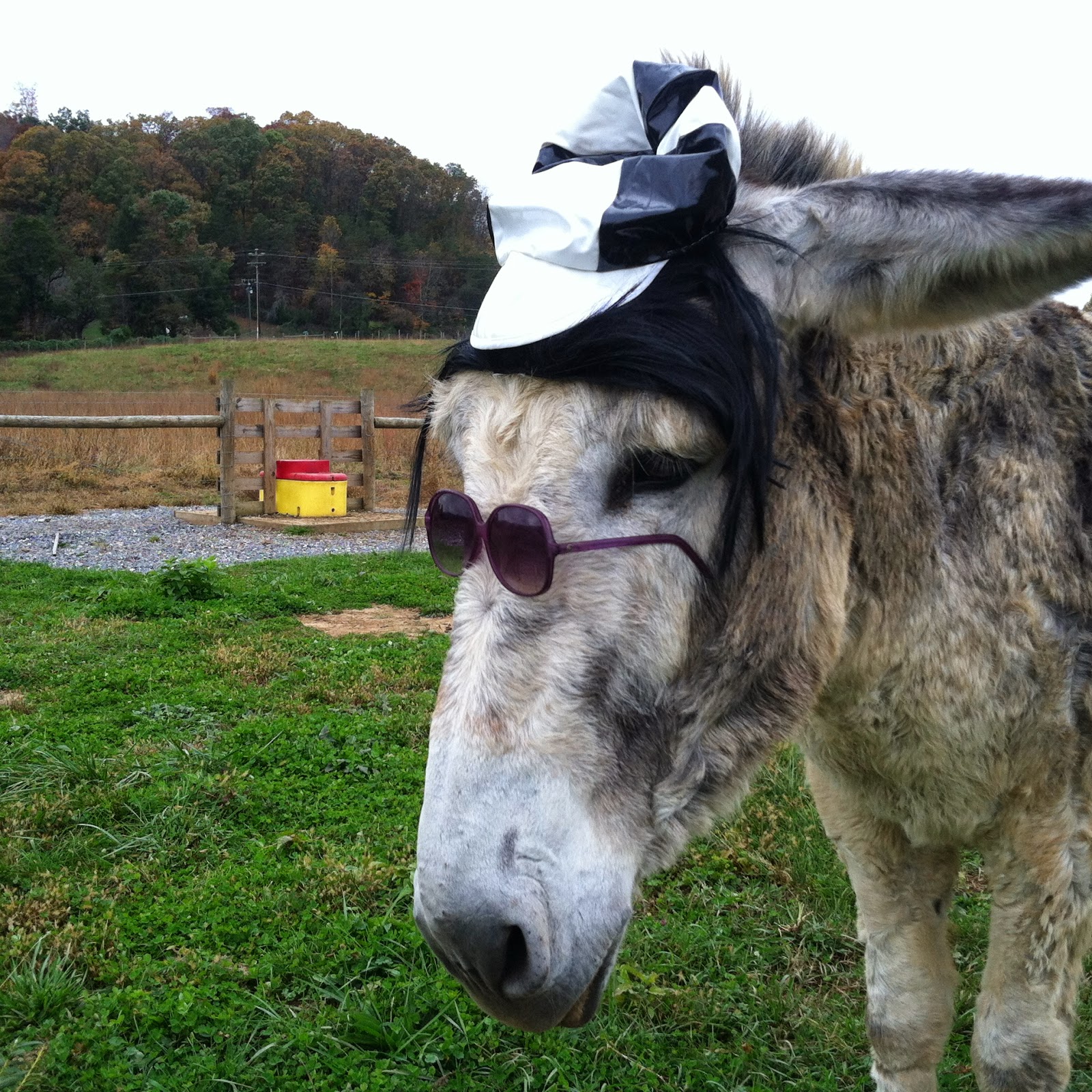 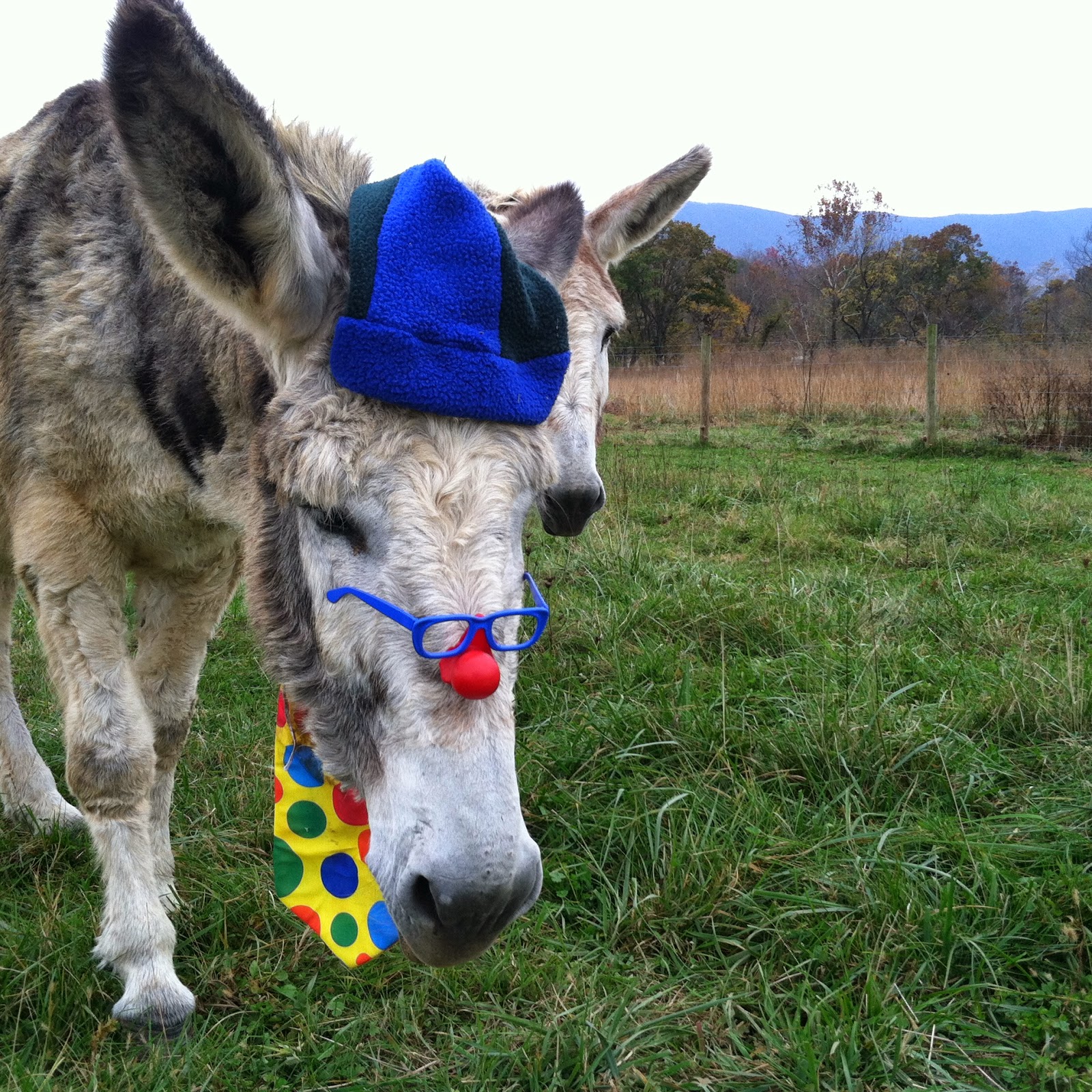 It was funny how many of them didn't mind glasses on their face.  At one point I went to get a picture of a goat and realized Willo was still wearing sunglasses and didn't seem a bit bothered.  Mickey looks especially chic in her shades. 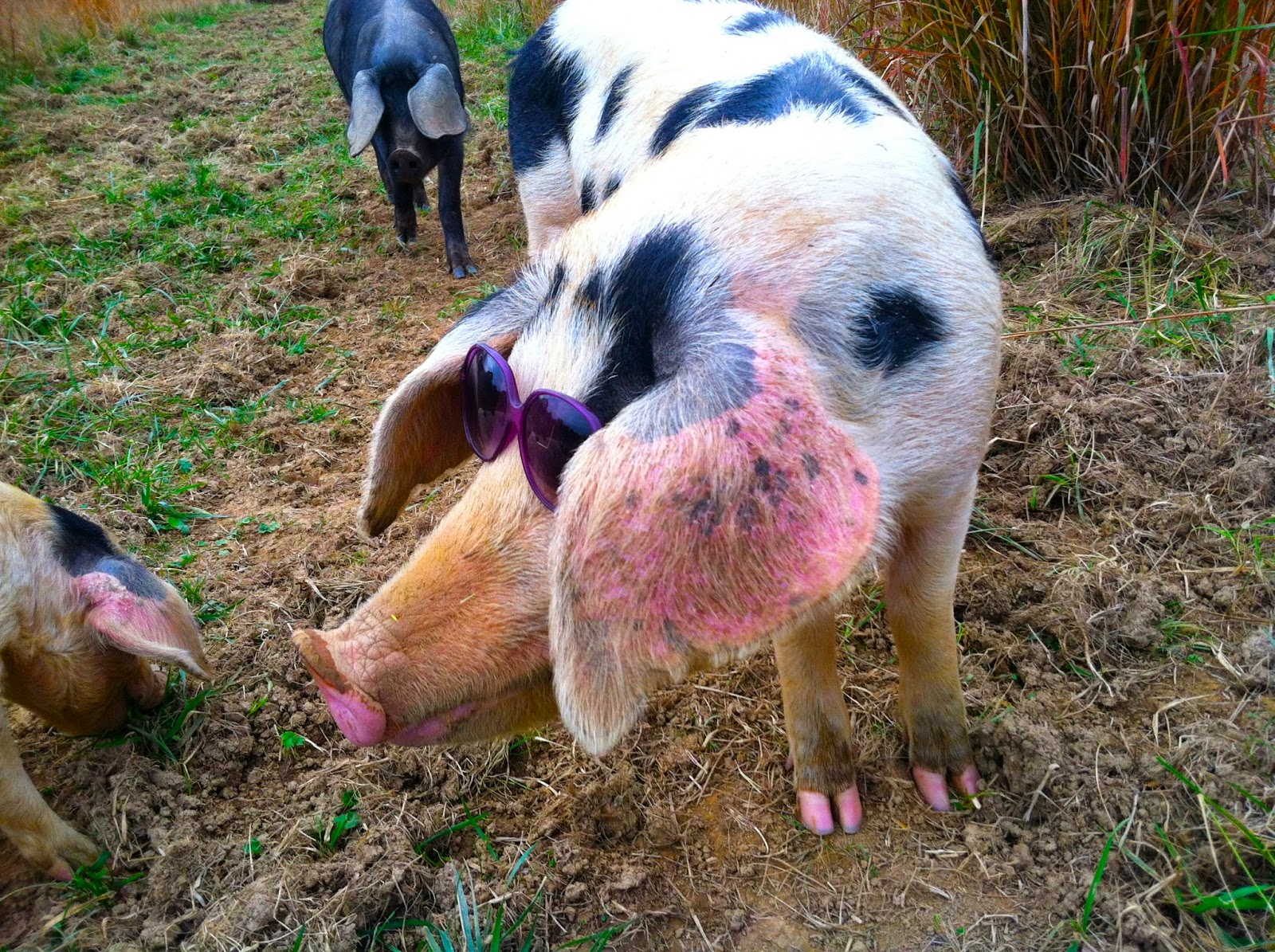 Unlike his mother, Windsor was fascinated by the glasses.  Seriously, isn't he the most handsome steer you've ever seen? 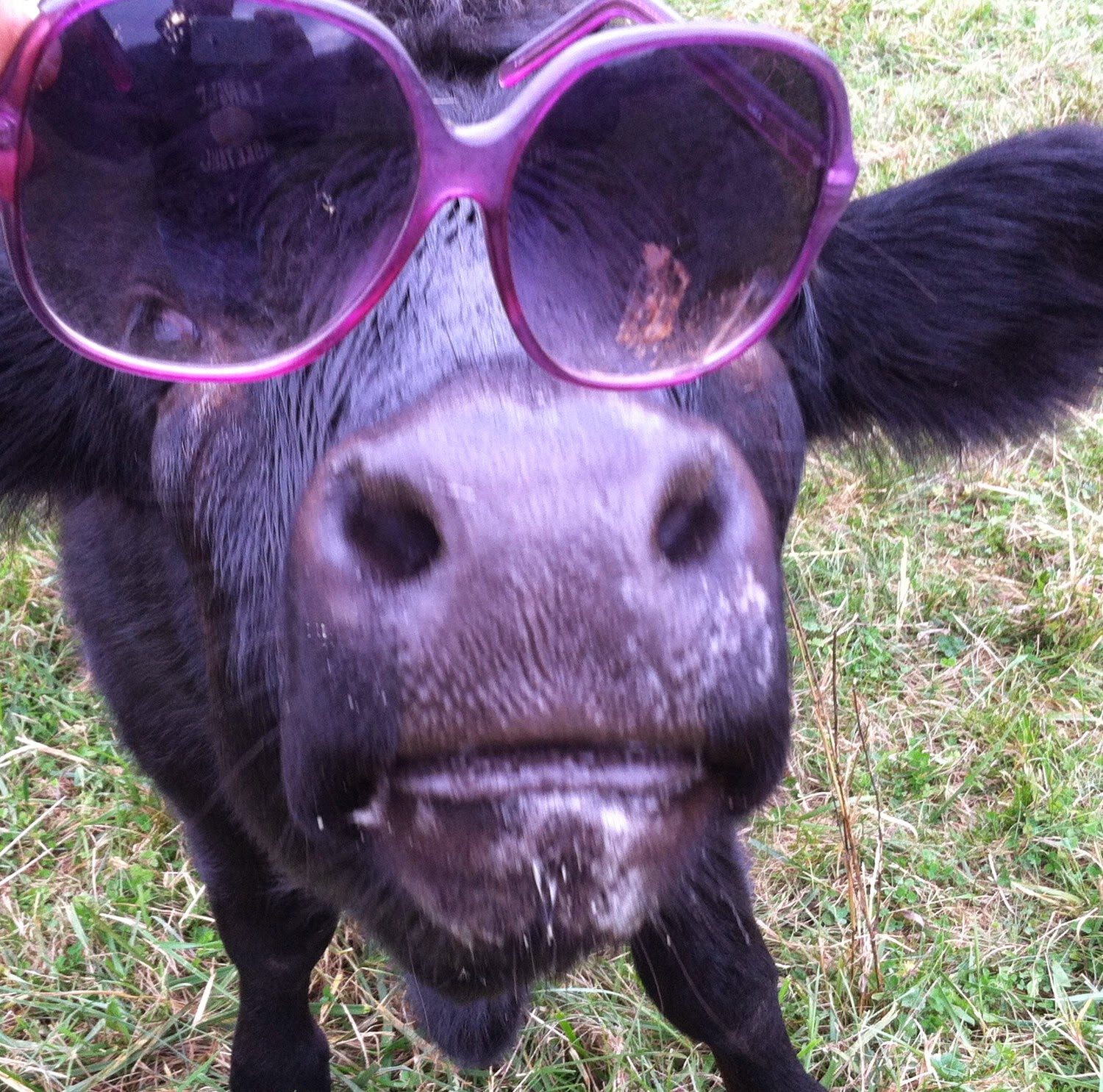 And he knows it. 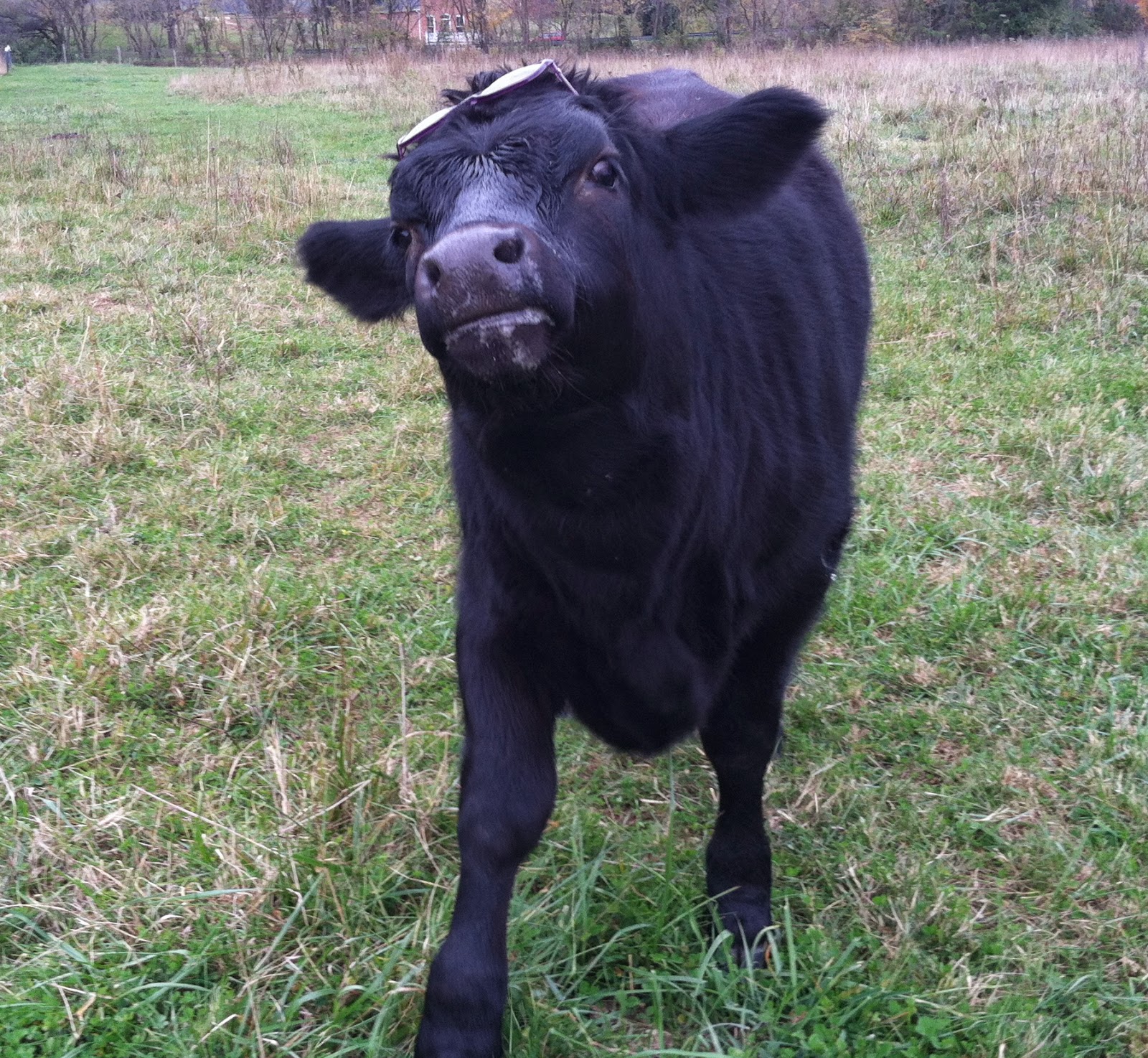 Usually Cooper is the obvious goat for Halloween couture but he stinks to high heaven and I can hardly stand to be near him so poor Lily had to be eaten by the fierce dragon. 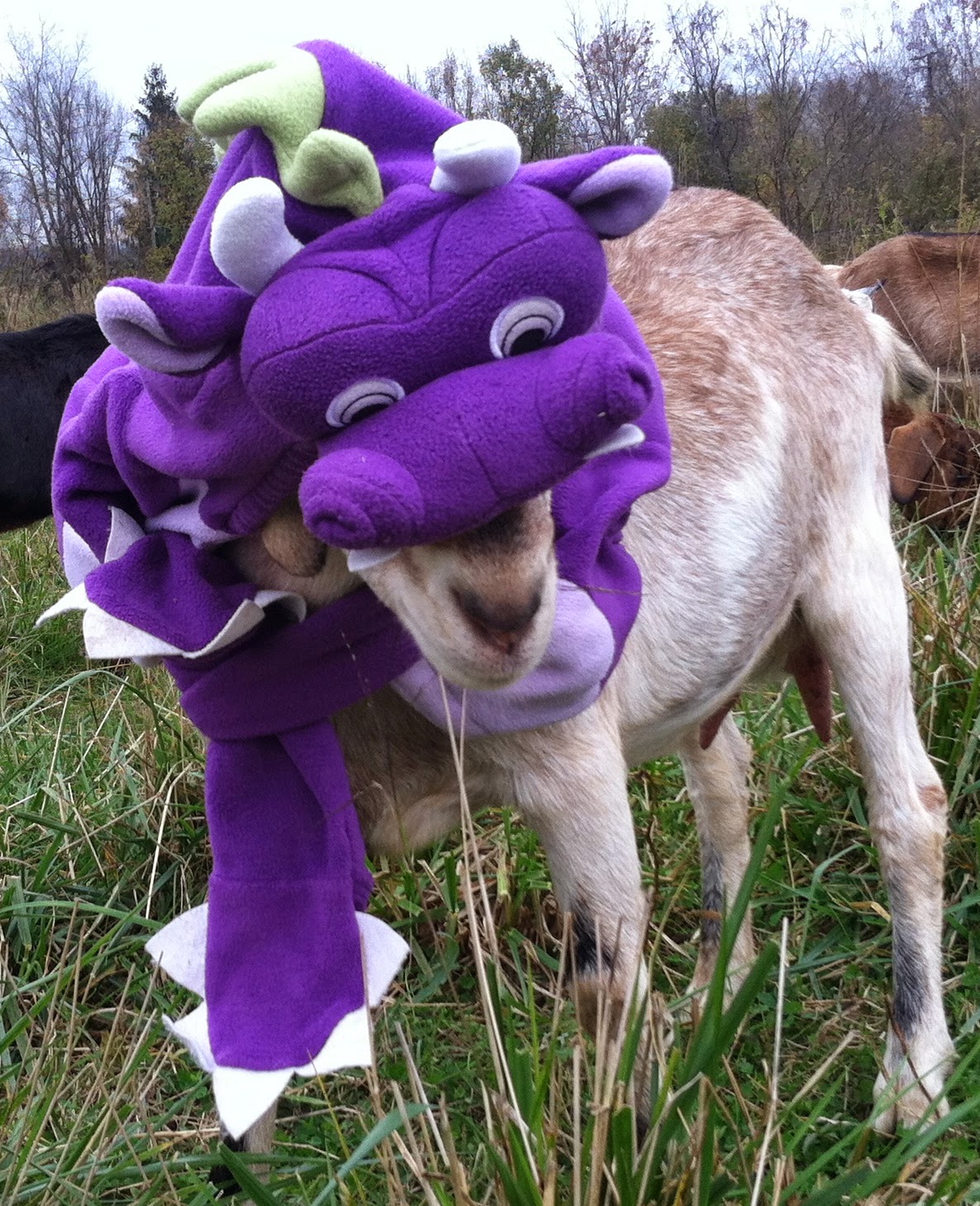 And finally, Mr. and Mrs. Elk Cliff farm.  Maybe you can tell what they're trying to be. 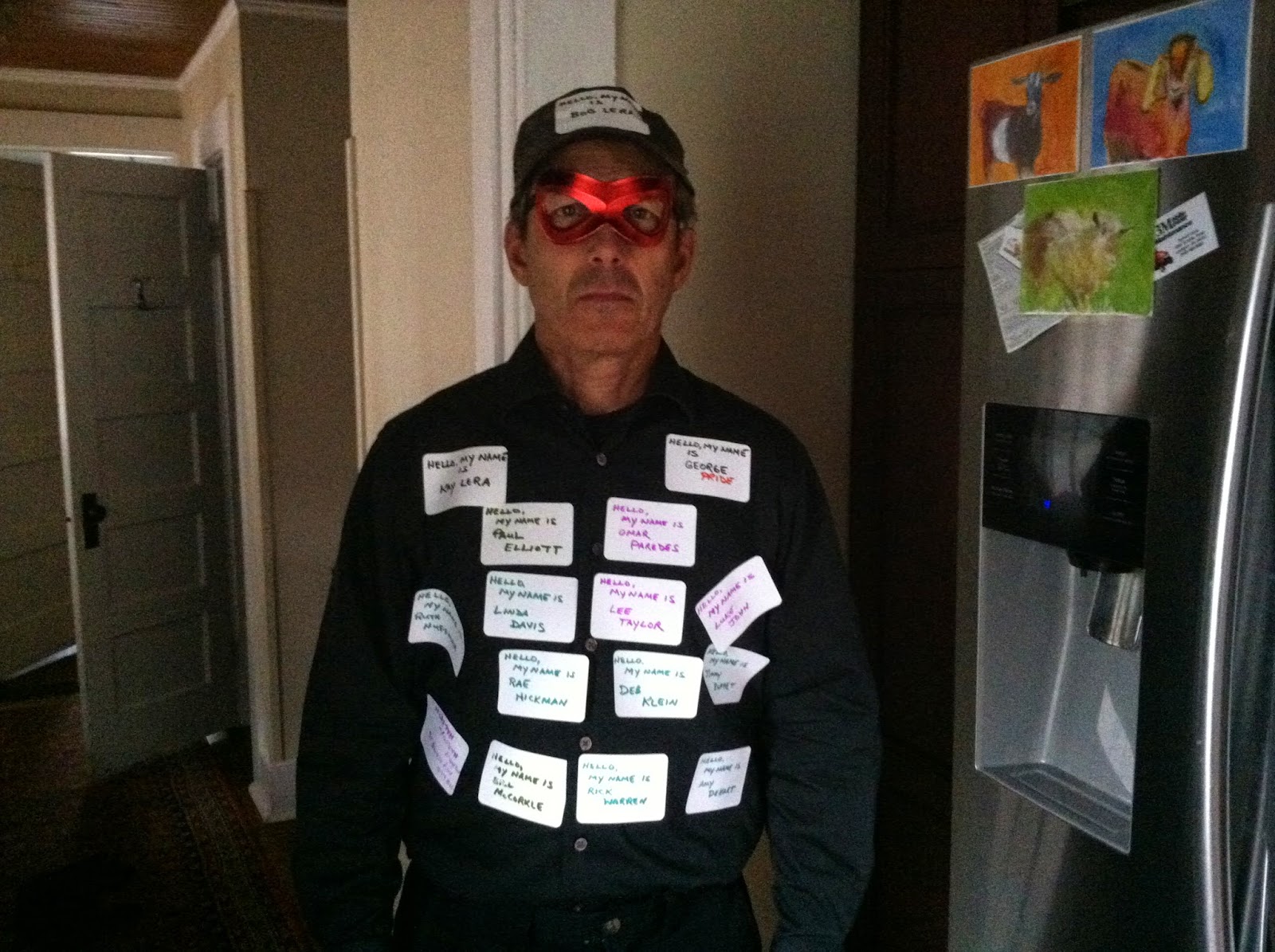 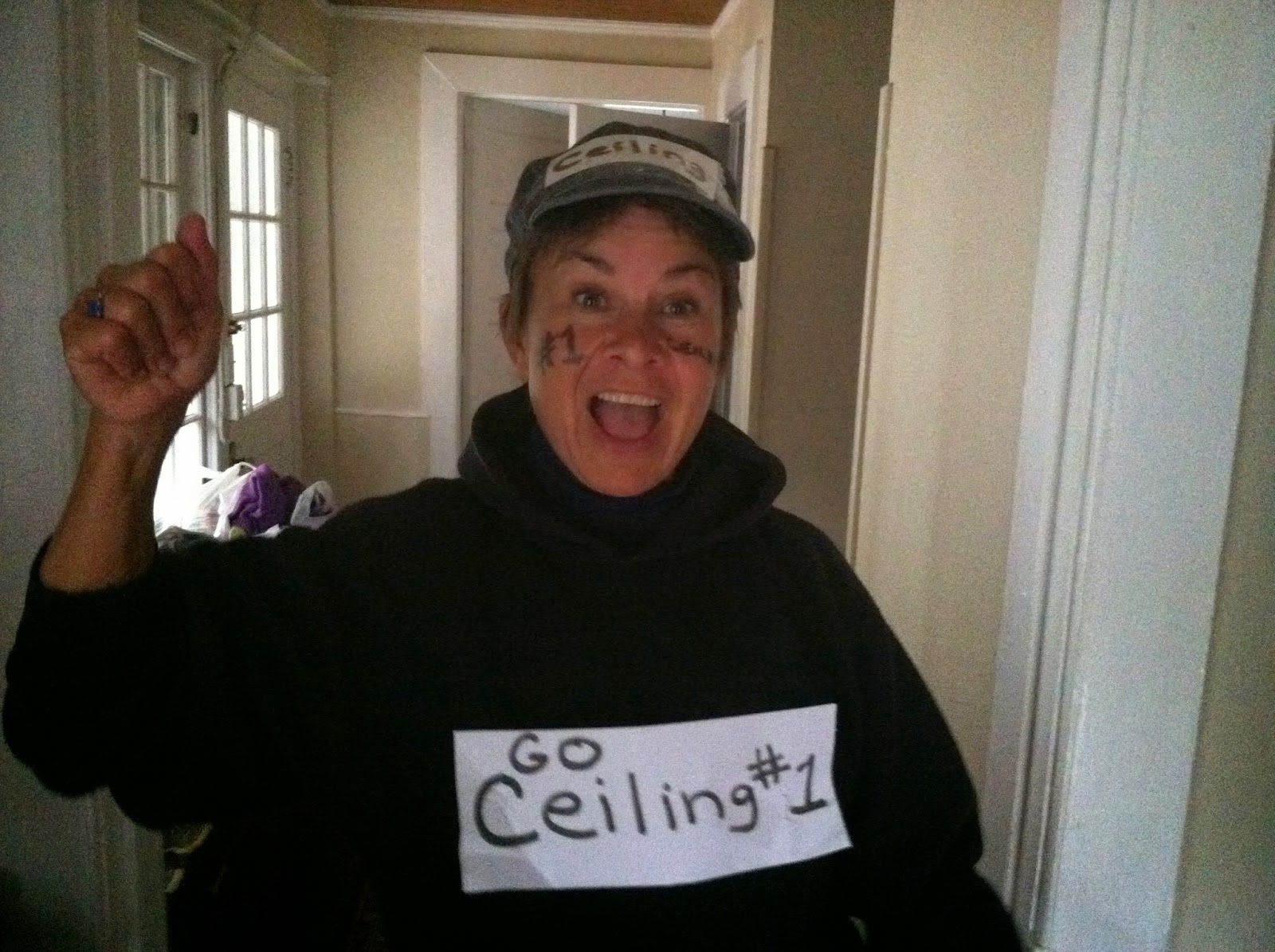 We went to a party tonight and not too many people knew what we were.  All of us brought candy and finger foods but when I snapped this next photo it was clear I haven't been feeding James enough. 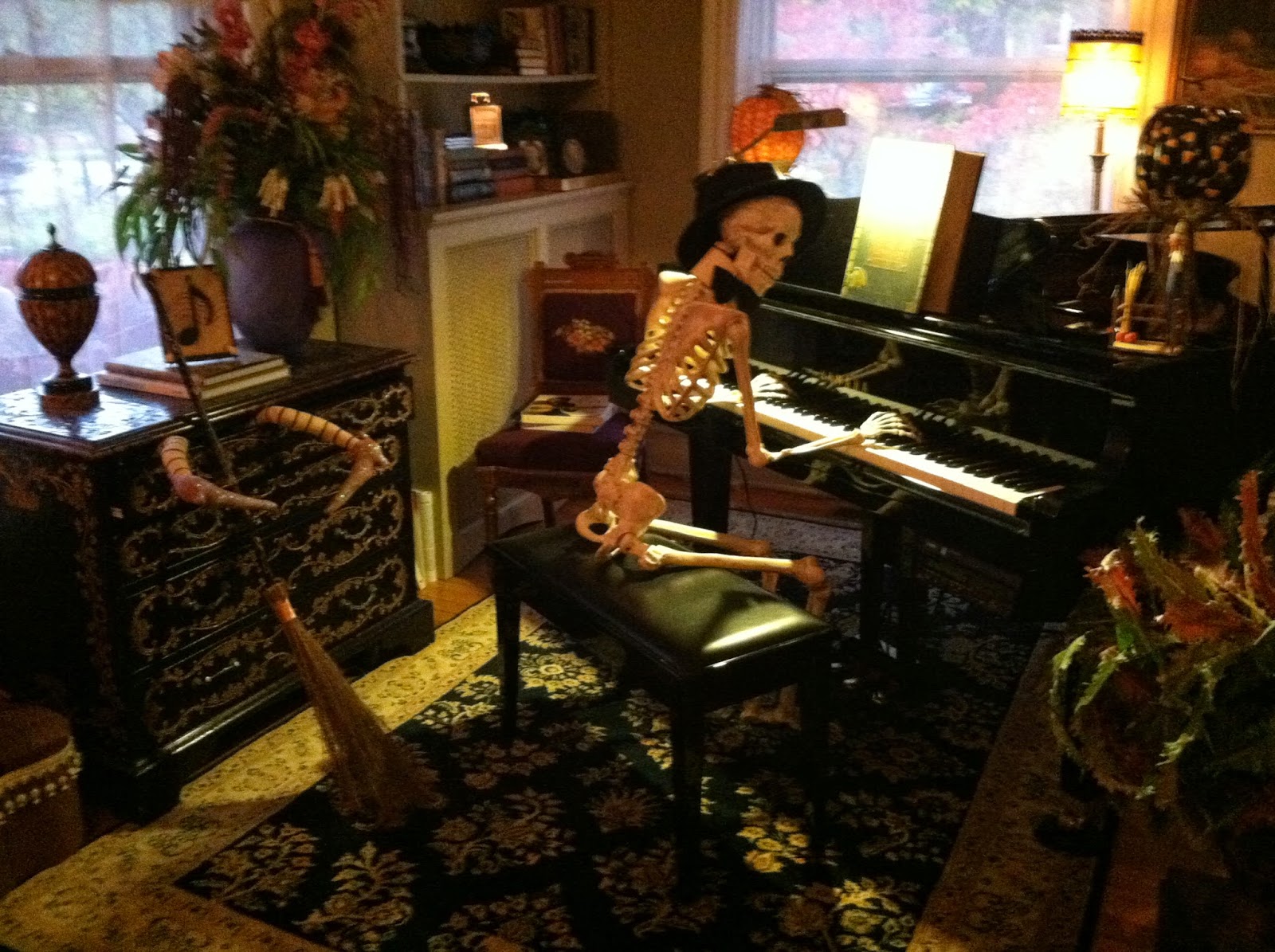 I, on the other hand, have had my share of treats tonight.

We added a little color to the farm this week.  Adam and Melissa came for a few days and helped us get the first coat of paint on Raisa and the goats' barn.  I used to call this Raisa's barn but now she shares it with Windsor, Keri and the goats. 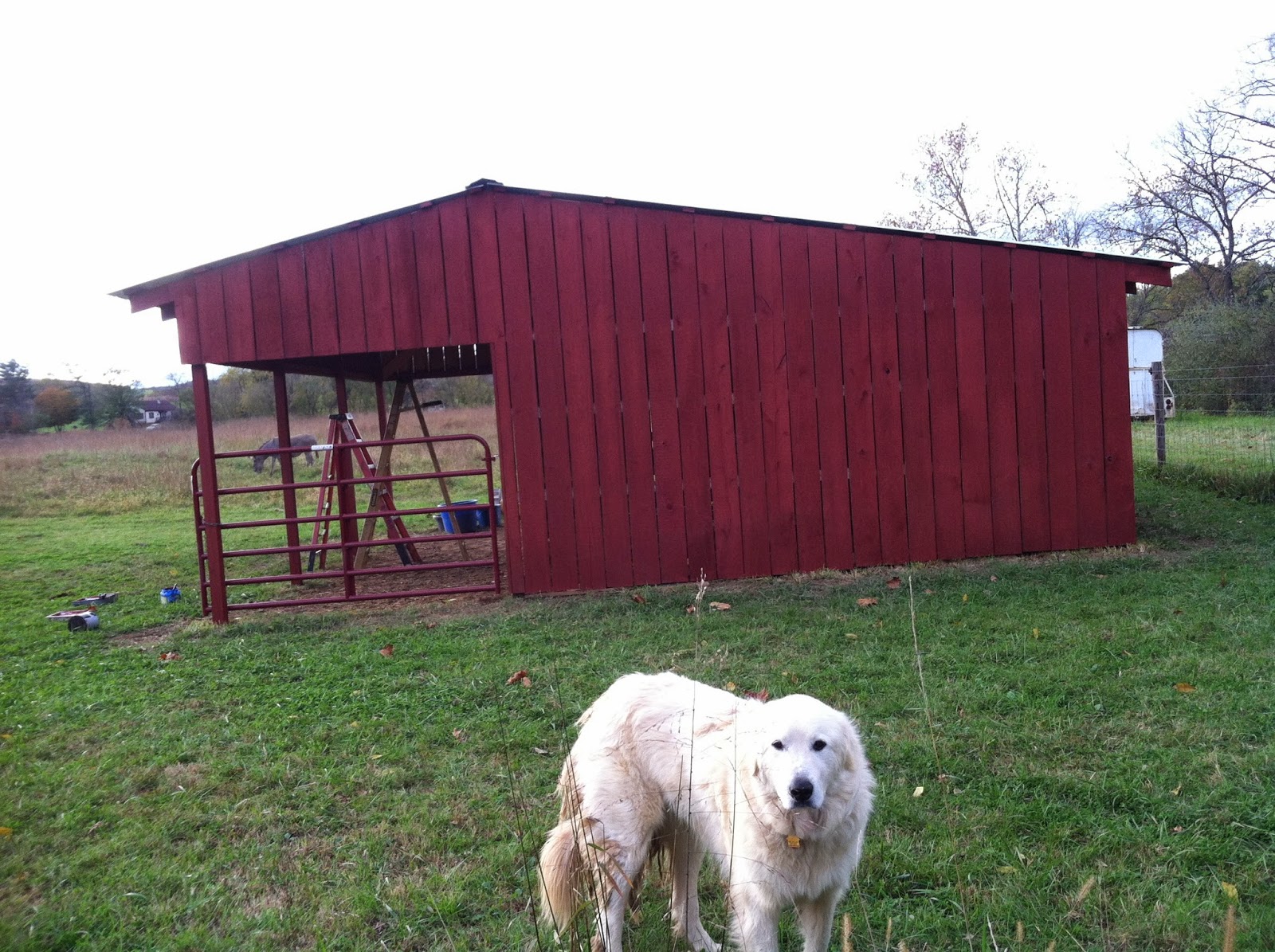 Maybe you can see the red barn way across the field in this next picture.  Our mountains look prettiest at sunset but the colors seem a bit dull this year.  I've seen more color in other parts of the county than here. 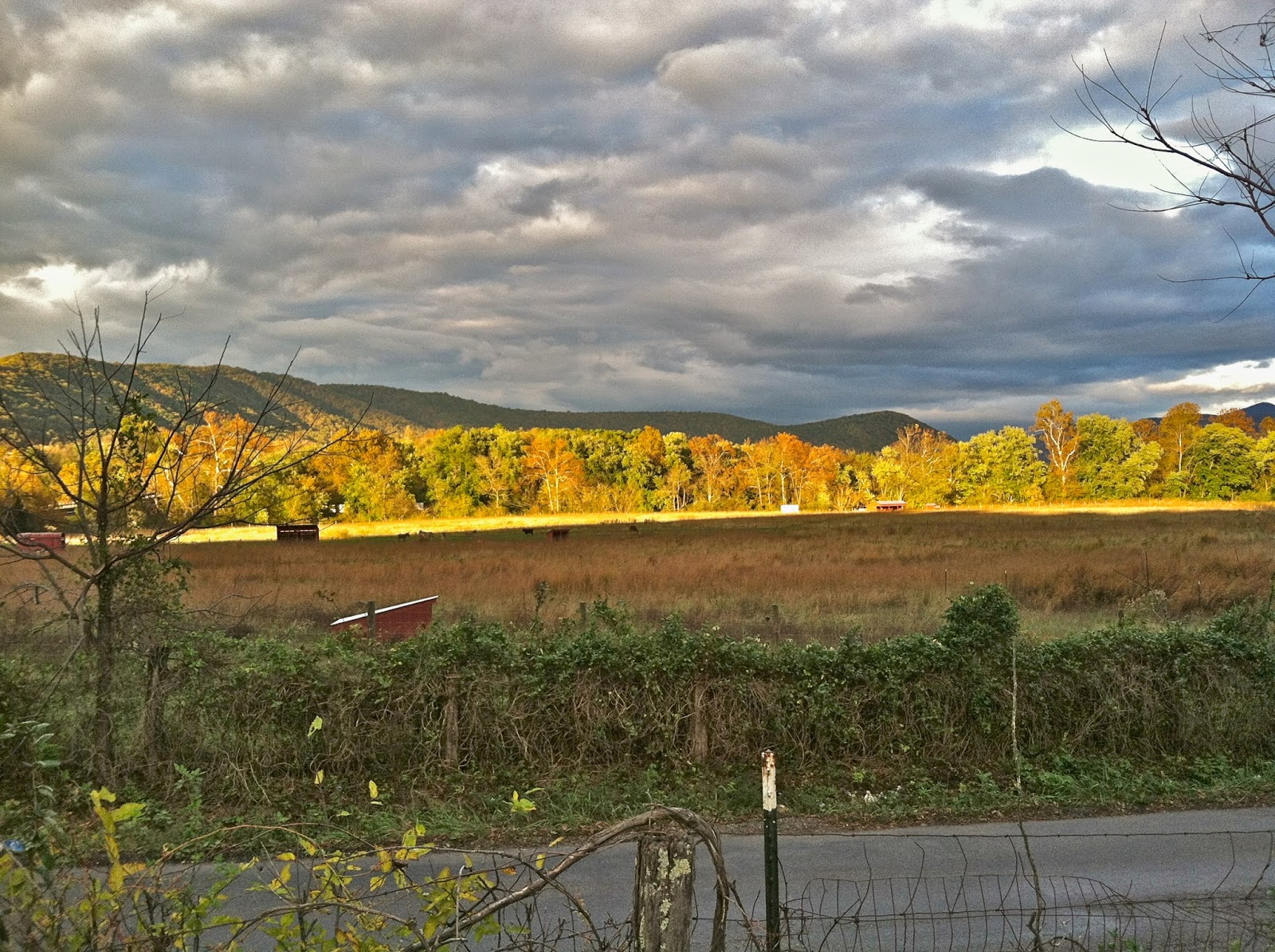 Another change we made this week was to move all 4 donkeys to the big field.  Since we merged the big and little donkeys they've become quite close.  I thought perhaps Chy and Wilson would take cues from Willo and Jaz and load into a trailer for the move.  You may wonder why I didn't just walk them over there.  Well, I'm a horrible trainer, I guess, because I've never been able to get them to walk across this tiny boardwalk over the ditch into the road.  I was truly amazed how well they cooperated.  The last time Chy was in a trailer was to come here to live and I understand she wasn't cooperative at all.  Wilson was born here and has never been in a trailer.  It took him about 30 minutes to load and Chy only hesitated briefly.  Black licorice is my secret weapon.

I think they're pretty happy with the move. 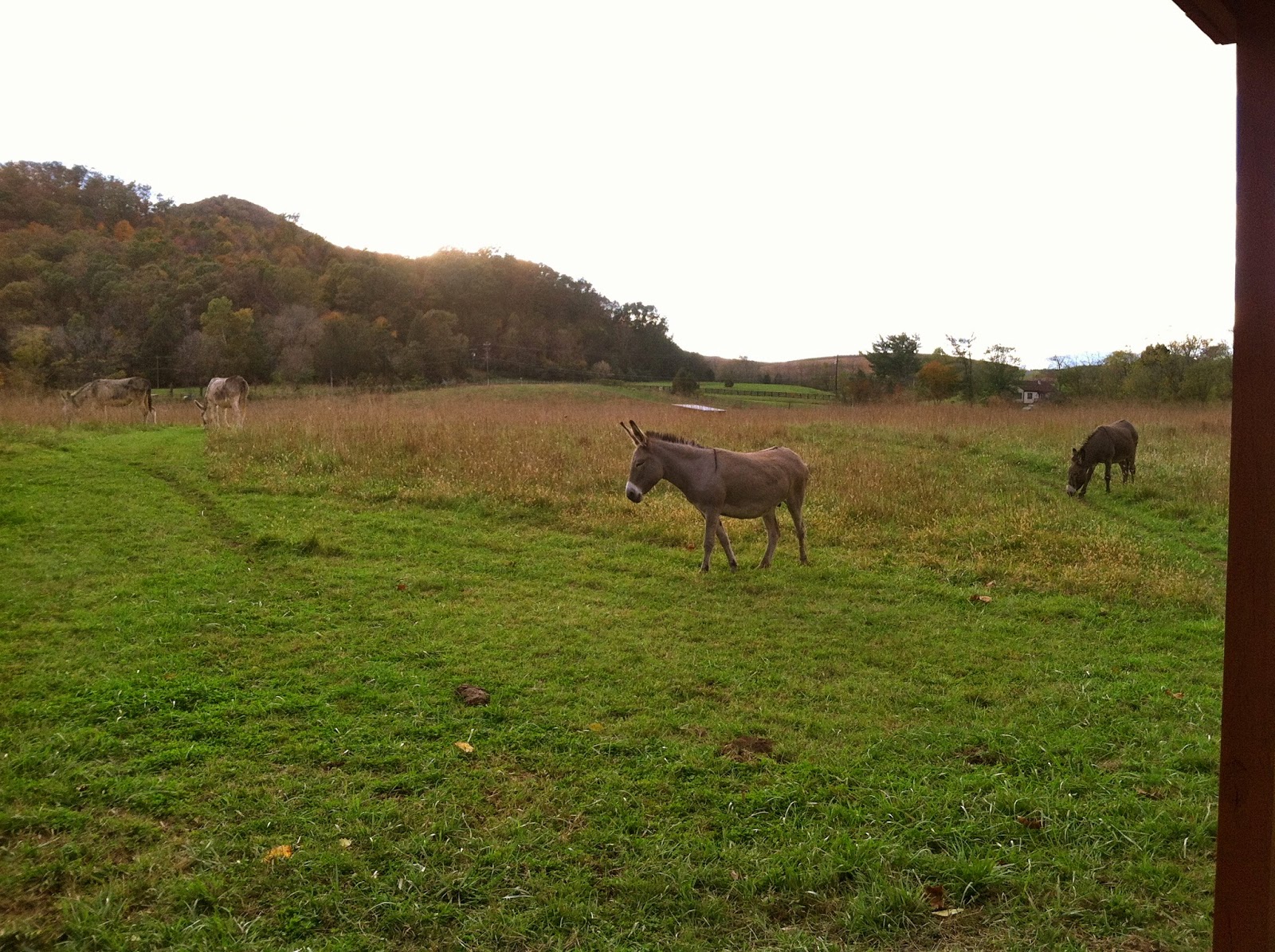 Keri deserves a raise because we're always adding to her guarding responsibilities.  Sometimes she takes breaks and finds special treats in the field.  I'm pretty sure she didn't kill this deer. 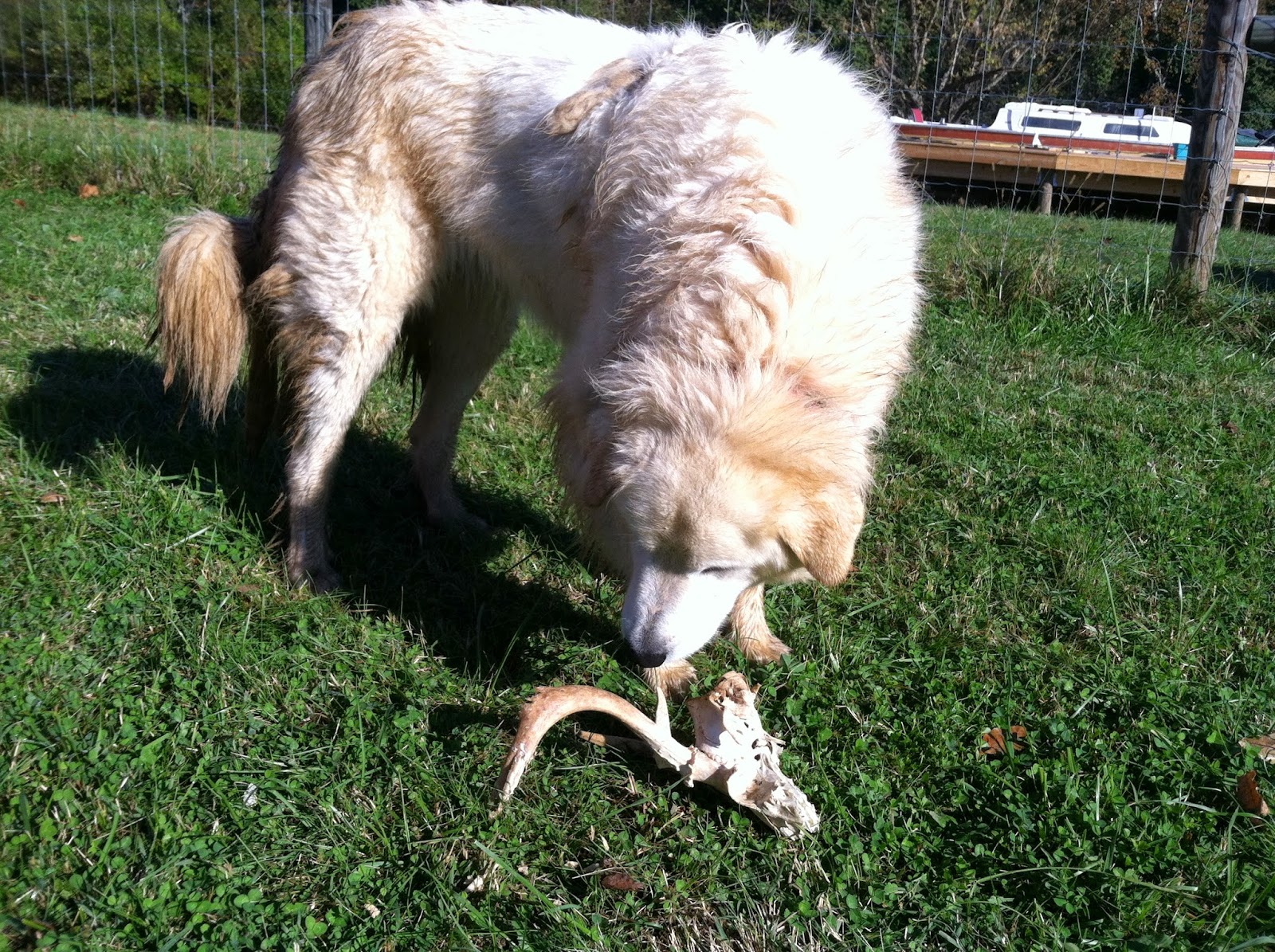 My mom mentioned this morning she's looking forward to seeing what I dress the animals up as this Halloween.  I better get working on this.  Only 6 more days.

I think I probably wrote more about Keri when she was a puppy than I have of any of my other animals.  You just can't get enough of puppies and kittens, can you?  That's how it's been with Willy.  She's so darn cute and funny I can't help but take pictures or videos of her.  Of course she moves so fast it's hard to catch her when she's being her most adorable Willy.  Today I saw this video of cats massaging dogs.  I thought, yeah, well Willy massages Baxter all the time.  They could've been in this video.


James is out of town so I decided to let her sleep with me last night.  Usually I close her in the den so Baxter can get a good night sleep without her pouncing on his tail or harassing him.  I don't know if she harassed him or not but she certainly kept me awake.  I have to admit most of it was pretty sweet.  If I let her she would have licked my face for minutes at a time.  I could only stand it for 10 seconds at the most though because it hurt so much.  Seriously, I think 40 grit sandpaper would be softer on my face.  When I couldn't stand it any longer I'd cover my face with the sheet but then she chewed and chewed on my hair and pulled it.  I'm beginning to understand why Baxter sometimes runs away from her when he's tired.  This must have happened a few times before midnight and then again just before 5:00 AM.  In between those hours every now and then I'd hear her downstairs tossing things about.  I had no idea what was falling on the floor but I didn't hear breaking glass so I didn't get up.

She reminds me of a toddler or puppy.  Sometimes she follows me around, even to the bathroom.  She loves a flushing toilet. 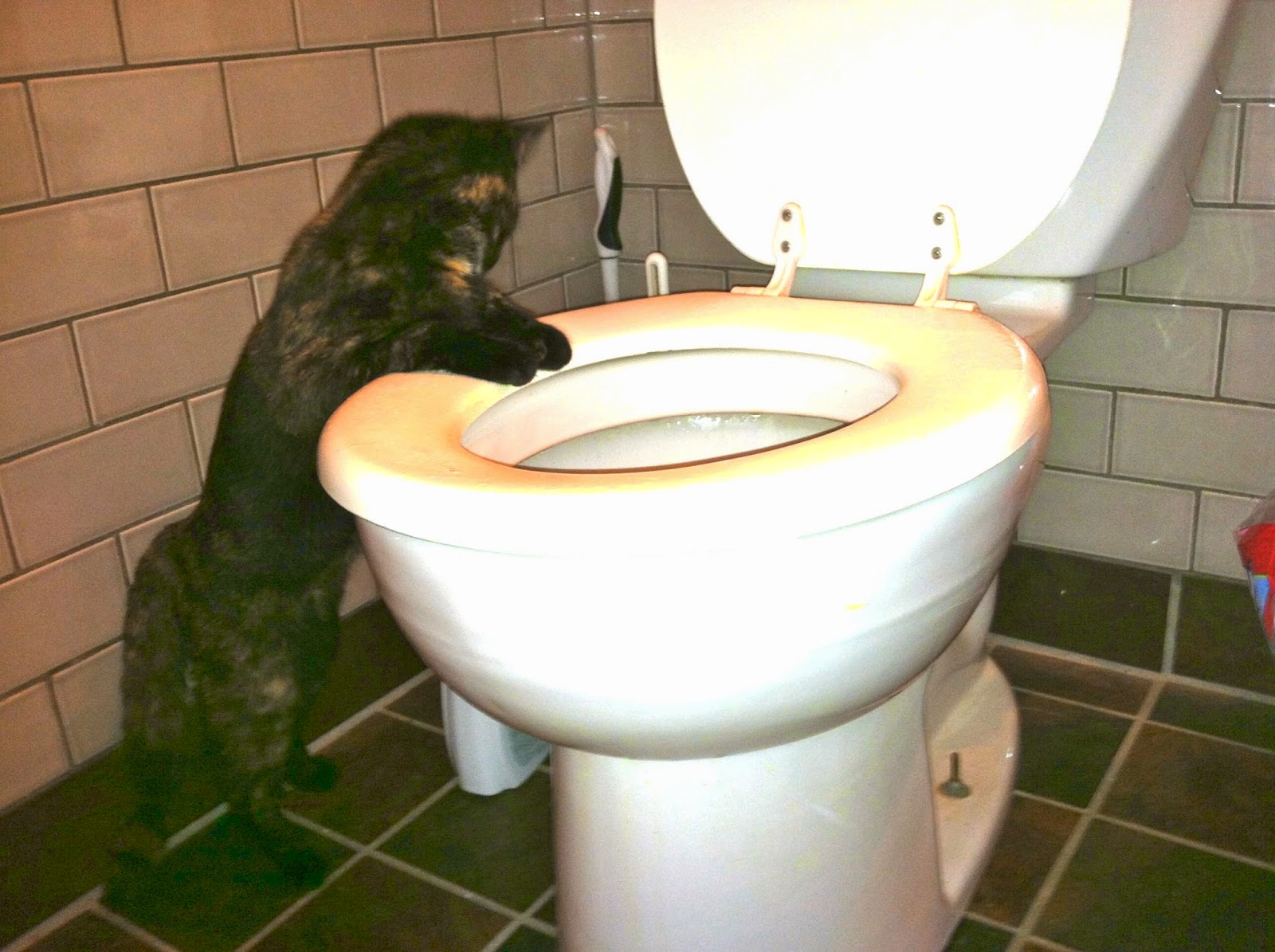 Upstairs or downstairs, she's there. 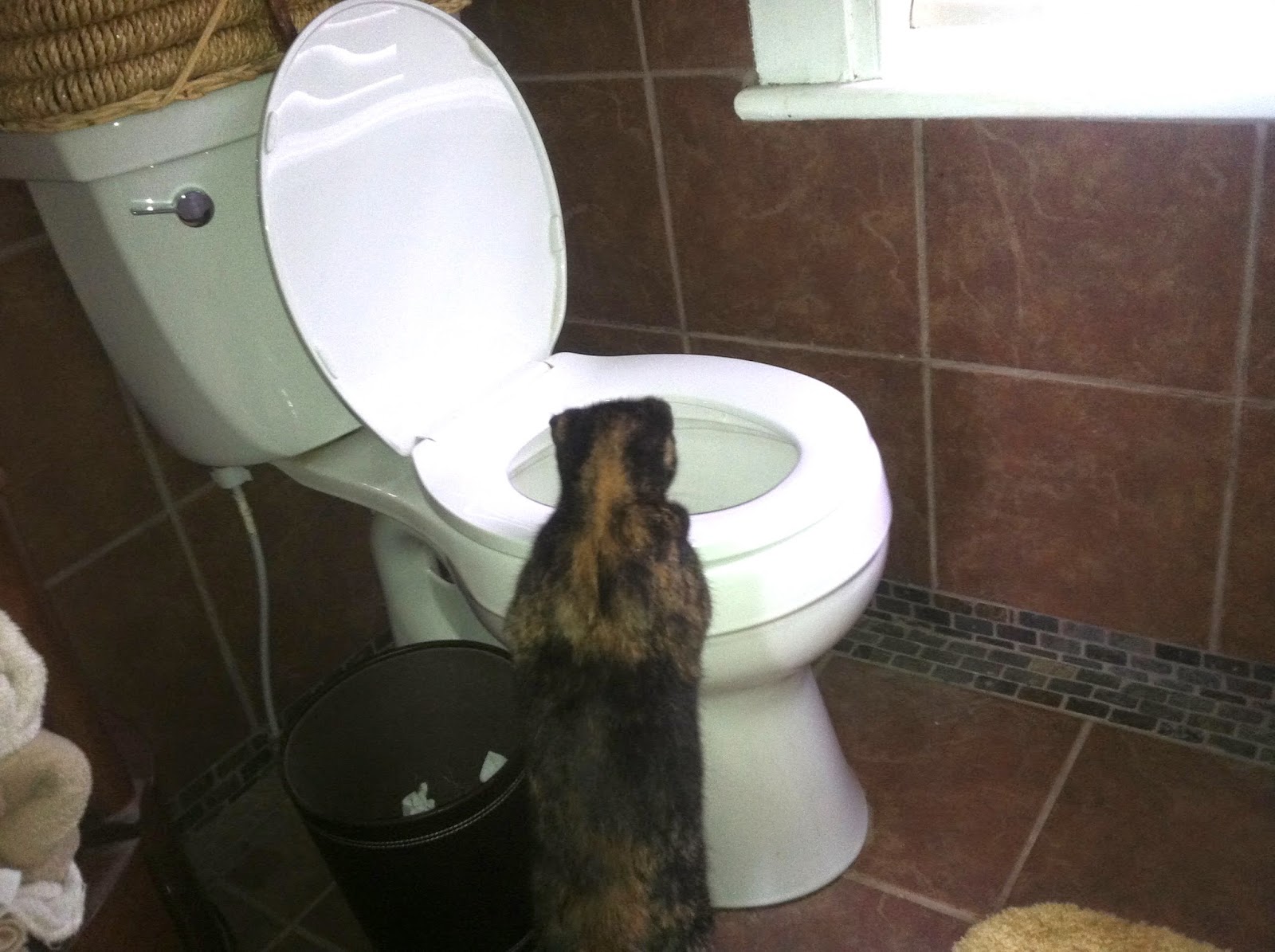 And if I close her out of the bathroom? 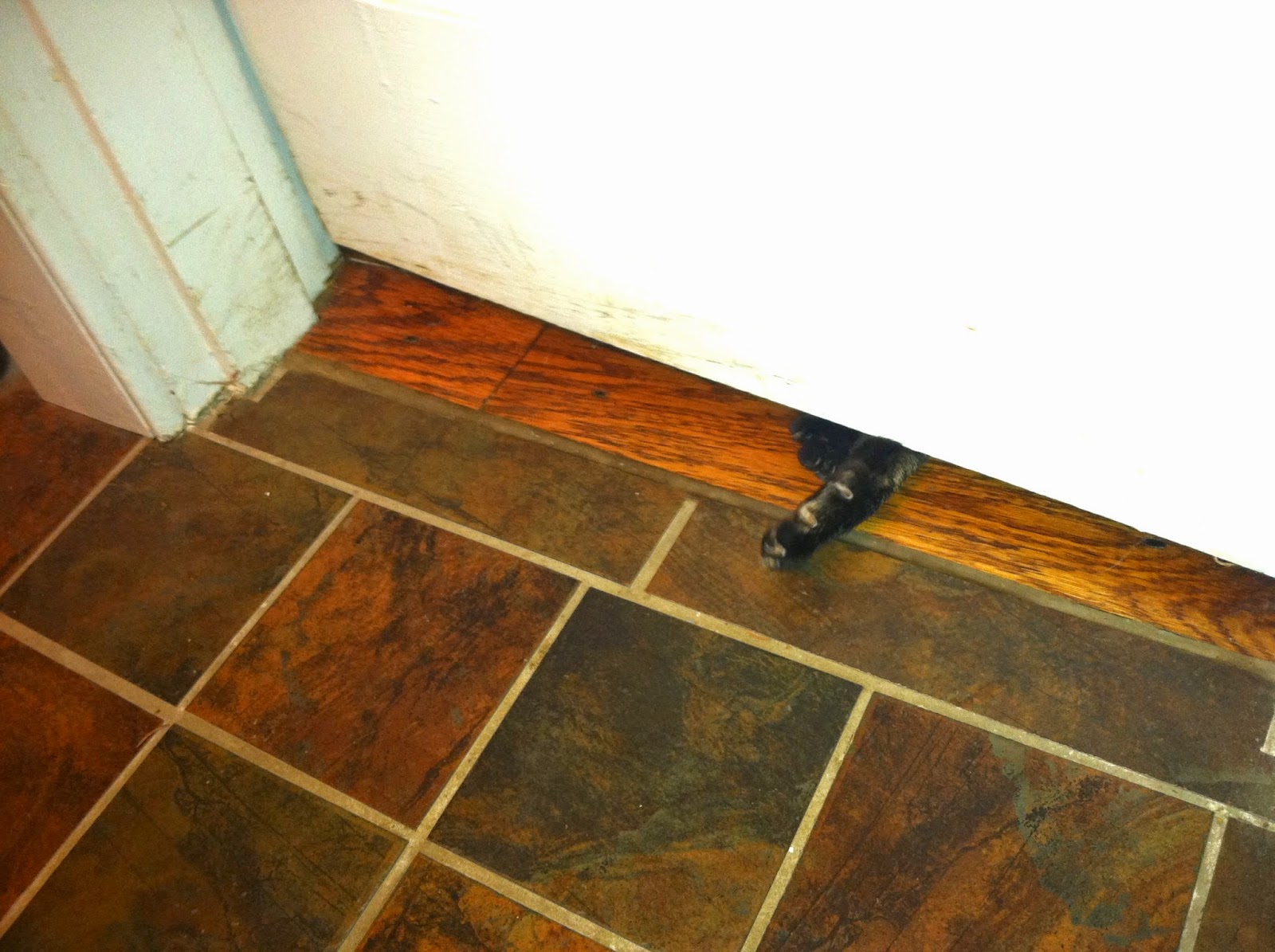 Aren't cats supposed to be afraid of water? Not Willy. 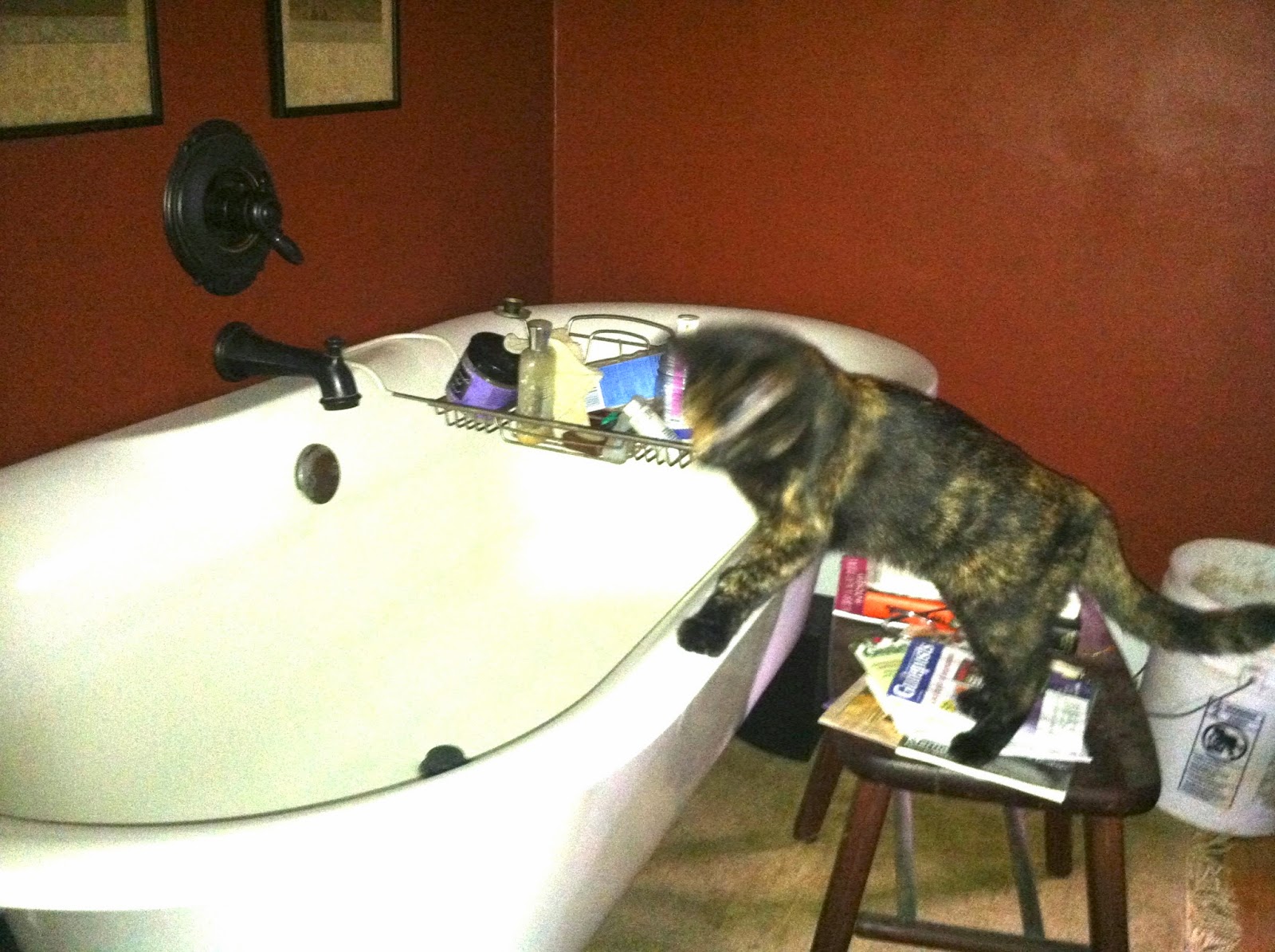 When I spray the hose she plays in the puddle.

As sweet as she was last night, I think I'll close her in the den tonight.  We'll all sleep better.

Different ways to look at mice

We get mice in our house and green house.  We set traps for them and feel bad about that but we also don't like the mess and destruction they cause.  We hope that Willy is a mouser and takes care of the extermination for us.  Somehow we won't feel as guilty if she'll get them.

Today, though, I felt a little different about seeing mice in my environment.  After milking I needed to use the "bathroom" down by the river.  By bathroom I mean a box with a hole under it and a toilet seat on top.  I'll admit  it's not the cleanest toilet you could ask for but the view is great, not to mention the fresh air can't be beat.  When I opened the lid I discovered a big fluffy nest on the front side. 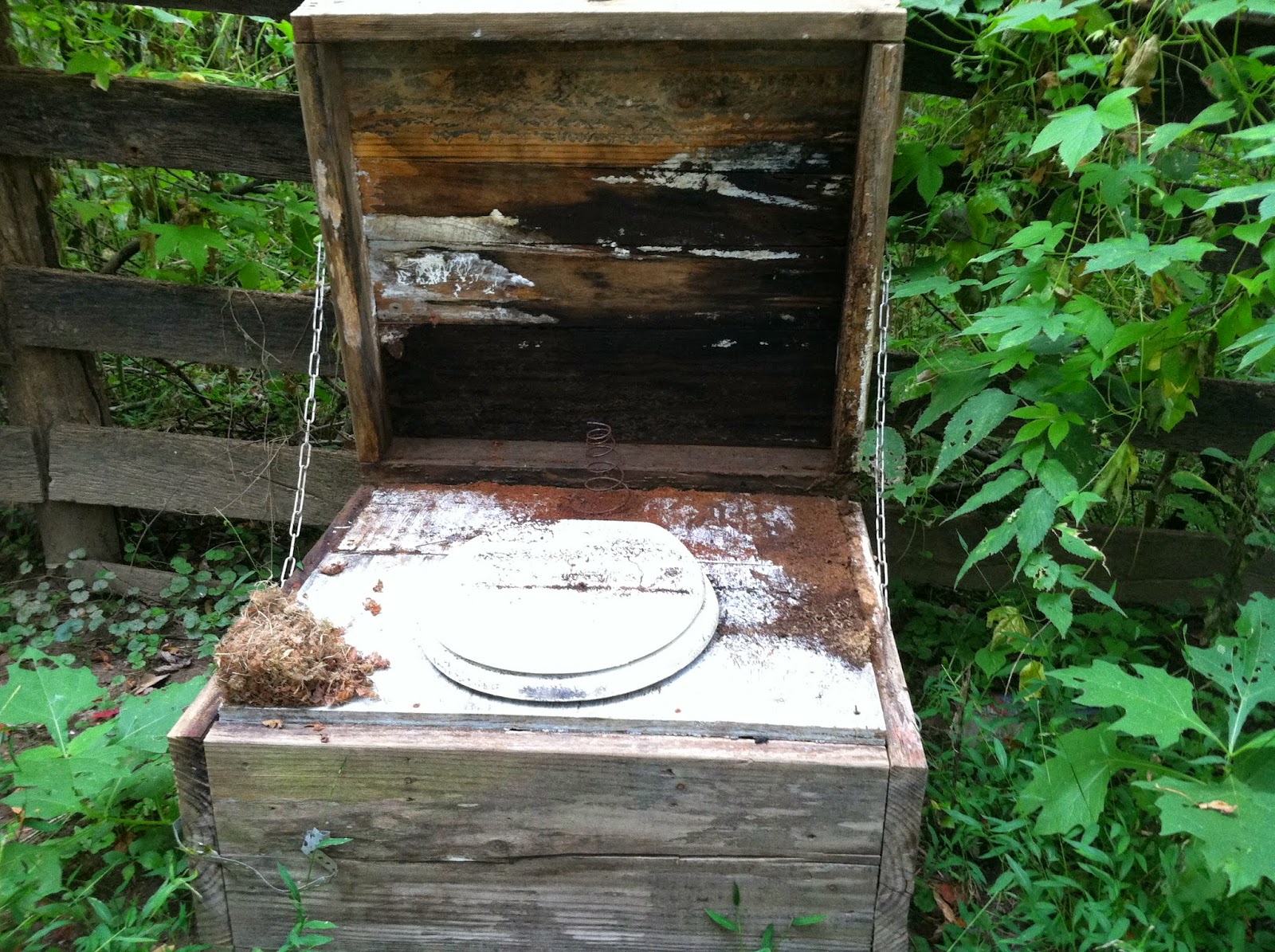 My timing couldn't have been worse.  Out of the nest came mama mouse with 3 babies still attached to her behind.  She was right in the middle of giving birth.  She was freaking out and ran away with these babies trailing behind.  I kept telling her to stay still and I wouldn't bother her but she didn't understand and jumped off the box, babies in tow. 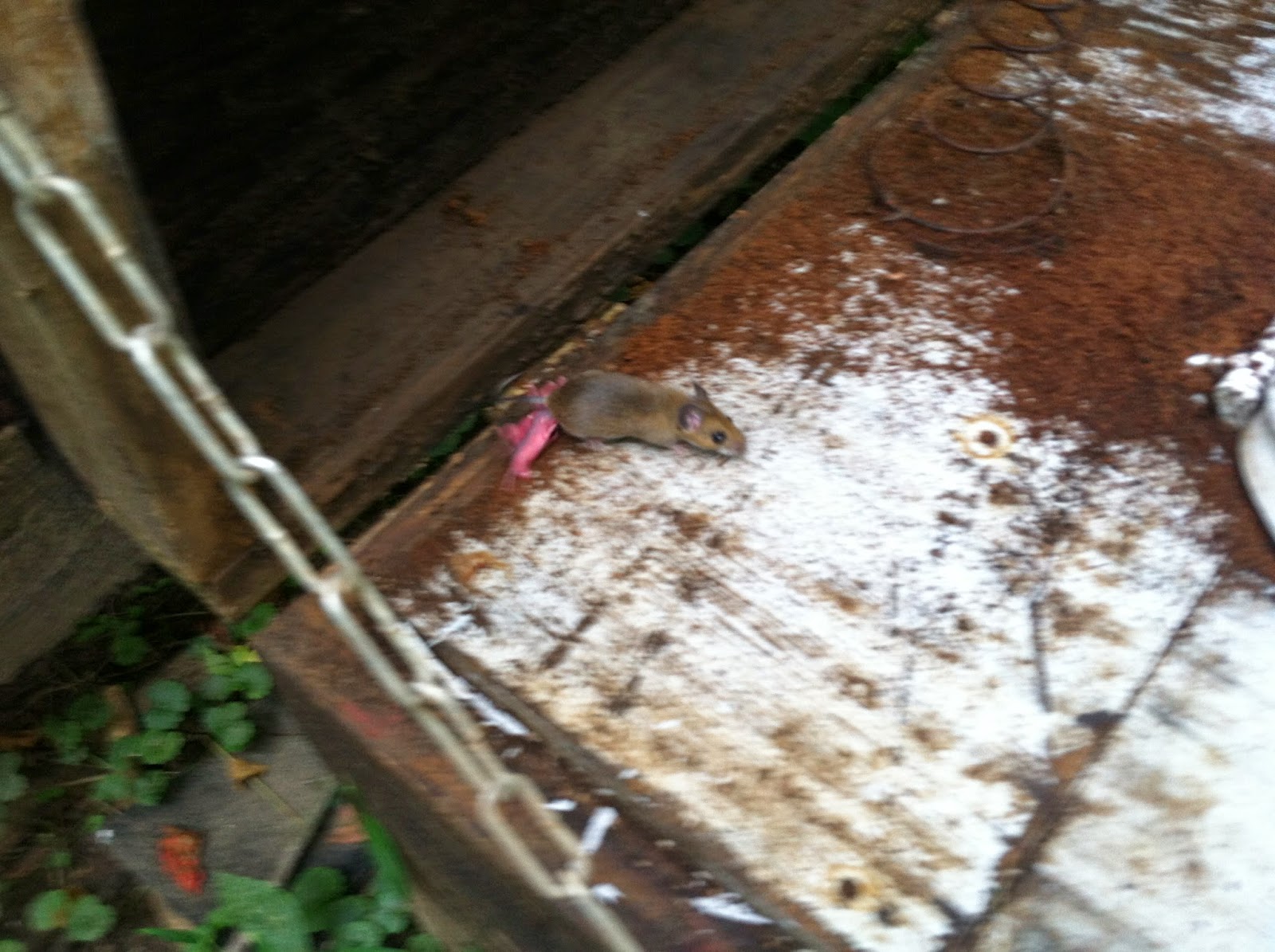 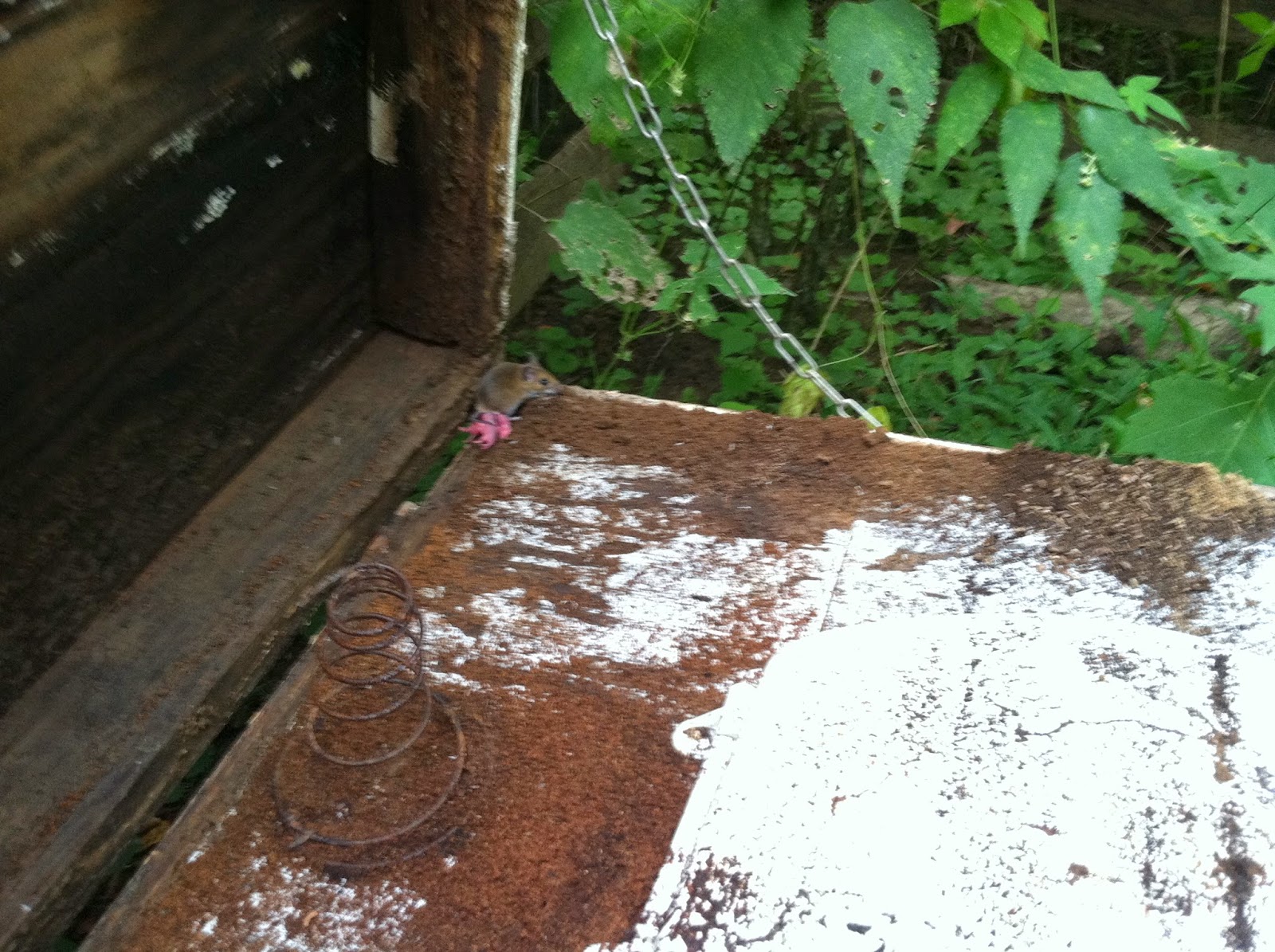 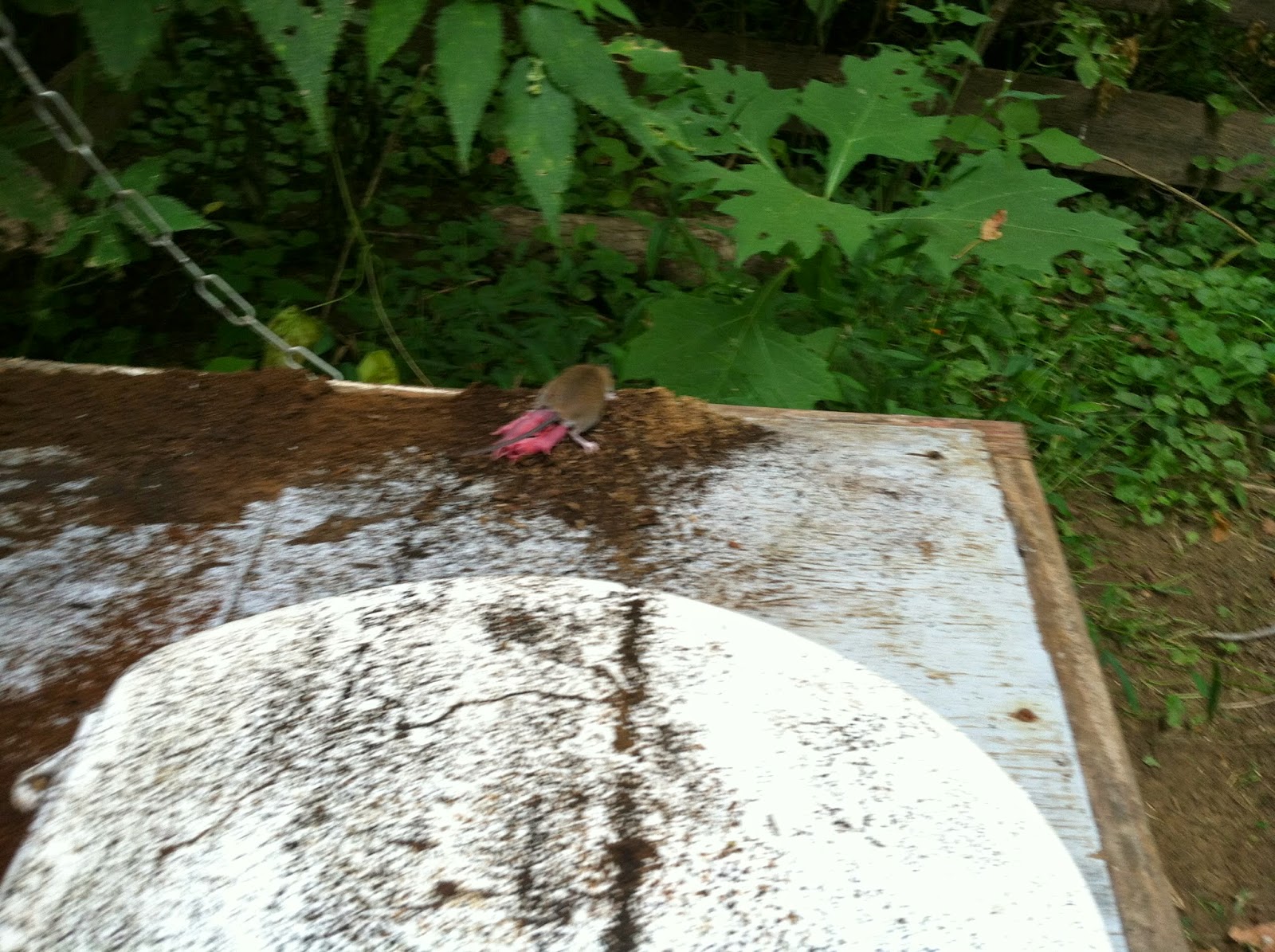 I checked the nest and saw she had left a single pink mousekin in there.  I felt bad about that.  I left the lid open to the toilet in case she came back, which is kind of silly because she built the nest with the lid closed to begin with.  I left her alone and went back to the house to use a real bathroom (no mice there).

Later in the day I went back and peeked in the nest to see if she was back.  She wasn't, but her baby was gone.  She must have come back to get it.  I wonder where they are now.  It's interesting to me that she knew how many babies there were and to go back for the one she left behind.

Next year these 5 mice will probably be invading our house.  They're a whole different animal when they're down by the river.  Odd, I know.
Posted by kpannabecker and jpannabecker at Wednesday, October 01, 2014 4 comments: