I've recently decided when I hear something negative or read something that irks me on Facebook I'm going to respond in a positive way.  That's what I've been doing this week after the horrible events that happened in Charlottesville.  As I've read posts by friends and family who, in my opinion, don't seem to believe there is still oppression in this country, I've decided to respond with a painting.  I'm calling it Embrace.  I know it accomplishes nothing but it makes me feel better and it's better than saying something I'll be sorry for.  I'd prefer to think about people embracing rather than spewing hate. 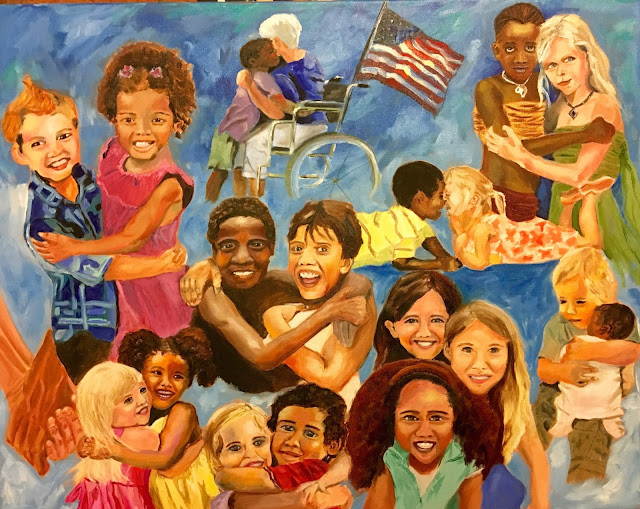 As I was painting today I was listening to John Denver.  I heard a song by him that was unfamiliar to me.  It's just as relevant today as it was when he wrote it back in the 80s.  It's called Let Us Begin (What Are We Making Weapons For).  Maybe you already know it.  Perhaps he was naive too but if everyone felt this way the world would be a better place to live.

I just got done reading a book, Daily Painting, by Carol Marine.  Look her up, she's a very good artist.  In the book she talks about how important it is to paint often.  If not daily, then as often as you can.  She suggests painting small - many of her paintings are just 6" X 6" - because you're more likely
to take the time to do it if you don't feel overwhelmed by a large canvas that will take hours or days
to cover.  I haven't been painting every day but I do try to paint at least 4 or 5 days.  Monday and Tuesday I painted two small paintings.  I'm not thrilled with them and they could both use more attention but at least I stuck with them until they were recognizable.

Even though I'm not in love with this painting, I do like the subject matter because it brings back memories of a simpler time.  We didn't have stairs but my grandmother did and my aunt had a slinky we could play with.  I thought it was awesome. 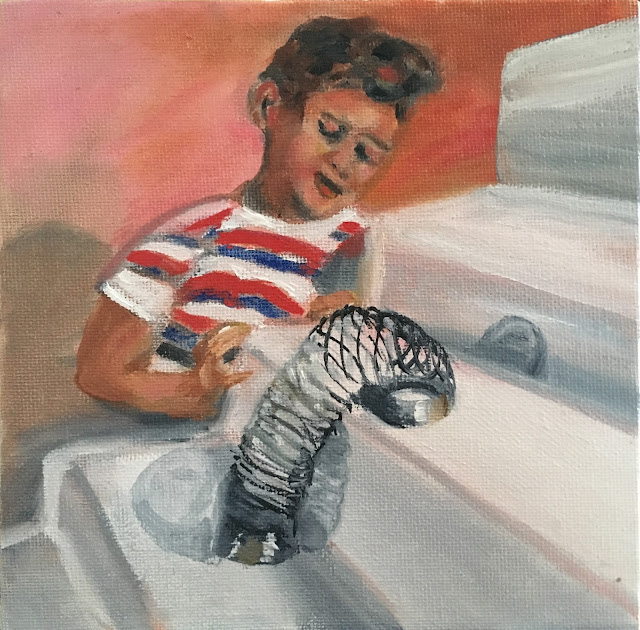 I Googled Slinky to see some pictures and learned this about it.  I had no idea it was created almost by accident. 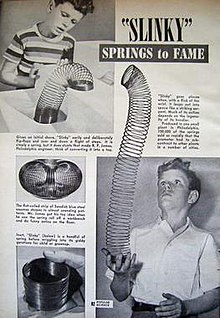 Slinky (1946)
In 1943, Richard James, a naval mechanical engineer stationed at the William Cramp and Sons shipyards in Philadelphia, was developing springs that could support and stabilize sensitive instruments aboard ships in rough seas.[1][2] James accidentally knocked one of the springs from a shelf, and watched as the spring "stepped" in a series of arcs to a stack of books, to a tabletop, and to the floor, where it re-coiled itself and stood upright.[3][4] James's wife Betty later recalled, "He came home and said, 'I think if I got the right property of steel and the right tension; I could make it walk.'"[5] James experimented with different types of steel wire over the next year, and finally found a spring that would walk. Betty was dubious at first, but changed her mind after the toy was fine-tuned and neighborhood children expressed an excited interest in it.[4] She dubbed the toy Slinky (meaning "sleek and graceful"), after finding the word in a dictionary,[3][4] and deciding that the word aptly described the sound of a metal spring expanding and collapsing.[6]
With a US$500 loan, the couple formed James Industries (originally James Spring & Wire Company), had 400 Slinky units made by a local machine shop, hand-wrapped each in yellow paper, and priced them at $1 a piece.[4] Each was 2 1⁄2" tall, and included 98 coils of high-grade blue-black Swedish steel.[7]The Jameses had difficulty selling Slinky to toy stores but, in November 1945, they were granted permission to set up an inclined plane in the toy section of Gimbels department store in Philadelphia to demonstrate the toy. Slinky was a hit, and the first 400 units were sold within ninety minutes.[4][7] In 1946, Slinky was introduced at the American Toy Fair.

Throw back Thursday, a day late

I'm trying to come up with a name for this painting but it's still so new so I'm going to give it some more thought. 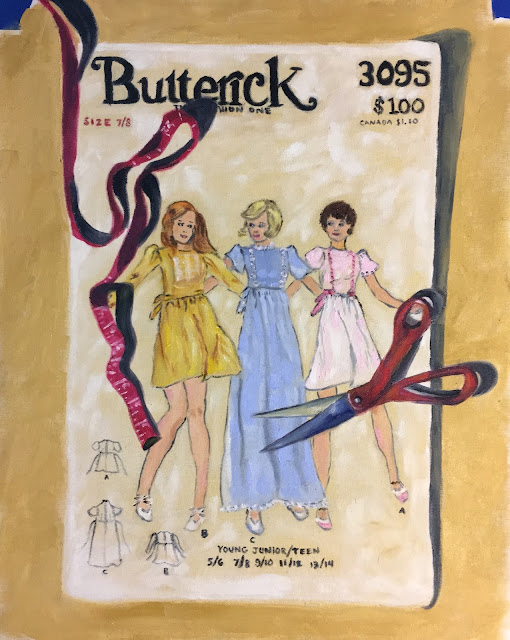 For some reason I became obsessed with finding a vintage sewing pattern to paint.  I don't really know why.  I went on Ebay and found lots of them for around 4 to 7 dollars.  I decided to check our antique mall first.  I lucked out and found a whole box of them (maybe 20?) for $3.00, total.  I had all kinds of ideas for what I wanted to do in this painting but many of my ideas were a little beyond my capabilities so I decided to just go ahead and paint the picture of the 3 girls and see where it went.
At first I couldn't decide whether to make them look more realistic or keep it cartoon-like.  As you can see I kept it like it appears on a pattern, with each form outlined.  It was very relaxing painting this; almost like coloring in a coloring book.

As I went on I couldn't figure out what I was trying to accomplish with this painting.  James asked what I was trying to get across or how it made me feel.  I guess it makes me feel nostalgic for the old days.  My mom sewed many outfits for me and my sisters but I especially found it exciting when she made our Easter dresses.  I like these old fashioned dresses and the innocent-ness of them.  I'm sure I had a dress like that.

If I decide to frame this I may decoupage the pattern itself onto the frame.  We'll see.  I may play with this some more and then decide.  Maybe I'll add a pin cushion to go with the tape measure and scissors.  I like painting the shadows.