It's been pretty crazy here lately and I think I need to get this down in writing so I remember who, what and how it all went down. This has all taken place within a month. Let's see. Breezy had quadruplet kids (3 girls, one boy), then Junebug had 8 piglets (4 girls, 4 boys). Both Breezy and Junebug delivered with ease and no complications. This past weekend was a doozy though. Delphi had triplets (2 boys and 1 girl) but one of them was in really bad shape and I'm not sure of the cause since I wasn't there, but I have my suspicions. The little girl was sopping wet and very cold and floppy. She couldn't even hold her head up and her body was limp. I brought her back to the house, dried her and warmed her up. After a few hours she could hold her head up. I fed her when she could hold her head steady. She has improved very quickly and now, 2 days later, follows me and Baxter everywhere. Baxter babysits her when I have other things to do. Her name is Florence. 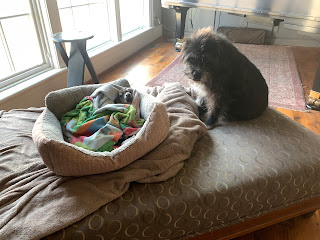 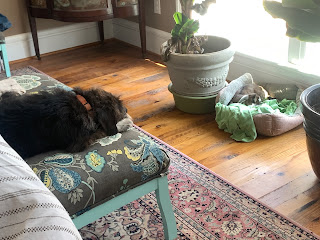 I tried returning her to her mother but neither one wanted any part of that. So, for now, she's a spoiled house goat, who seems healthy, happy and very sassy. Today I took her to my studio while I worked outside. Baxter stayed with her. Here they are on the ride home. 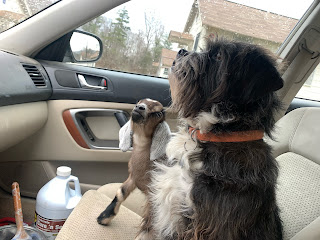 Here are her big brothers, Ferdie and Felix. 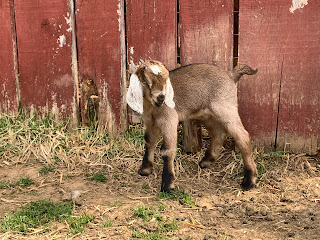 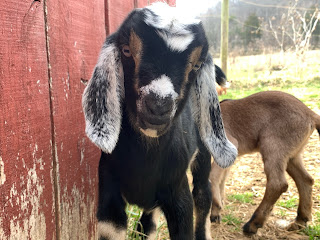 Last night after dinner I went out to the barn to check on Gretchen, who I was expecting to farrow sometime soon. Earlier in the day she didn't have any milk but it can come in fast. I got to the field and everyone was out of the barn except Gretchen. Well, Gretchen and all of Junebug's piglets who were all nursing on Gretchen and stealing the colostrum which her unborn babies needed. Every time I pulled the babies off her they'd run right back and latch on. Even when their own mom came in they weren't interested. Finaly I got some food and bribed everyone out of the barn (unfortunately Gretchen followed) and closed some gates that close off half the barn. I was able to coax Gretchen back in. It was all very frustrating and stressful because I was afraid the 2 week old babies would push the newborns away and they'd die. Anyway, she ended up having 5 live babies - 4 girls and 1 boy (1 dead, don't know if it was stillborn or got squashed). I left at 10:30 when there were 4 babies. I sat in the barn for 4 hours waiting. It was the longest pig labor I've experienced. Everyone else was watching us from the other side of the gate. Here's my view of them - cows, donkey, goats, pigs and dogs eyes glowing. She wasn't giving them any attention so I didn't have very high expectations this morning when I went out to feed. I was pleased to find 5 lively piglets. One of them is the tiniest thing I've ever seen and I was shocked to see her still alive this morning. She was pretty weak, eyes sealed closed (which I worked on getting opened) and just so tiny. She runs around now just like the rest. I've kept Gretchen closed up all day with them and tonight too. Tomorrow I'll open the gates and hope they can fend for myself and Gretchen won't feed the others, though I feel pretty sure she will. 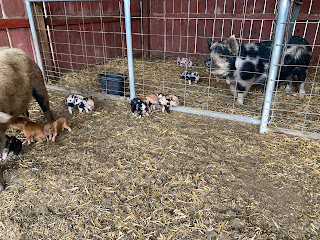 They're pretty darned cute. Aren't all piglets cute though? It's pretty quiet in our house tonight. Florence is asleep. I will have to feed her one more time tonight and then again at 4AM, which I can't say I enjoy. So, that's where things stand now. None of the piglets have names. 13 is a lot of names to come up with. I'm sure you'll be seeing many more pictures and videos of them.
Posted by kpannabecker and jpannabecker at Monday, March 07, 2022 No comments: 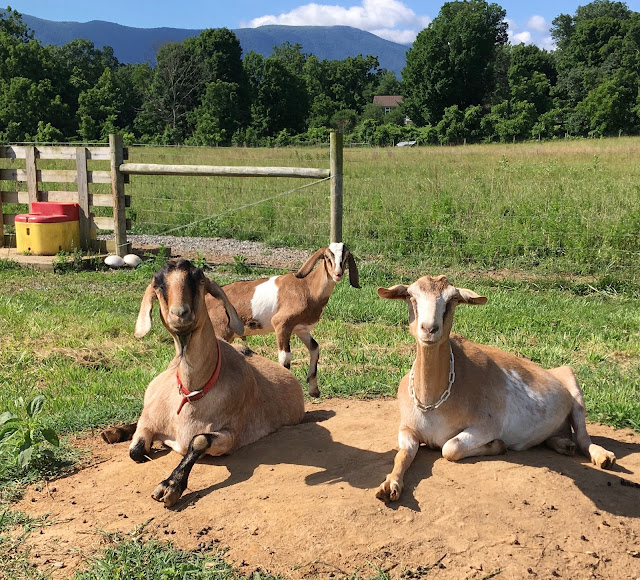 The last time I blogged here was 2 months ago when we lost our herd queen, Luti. This morning when I went out to tend to the animals I found Pessa lying in her final sleep in the hay. It was the way we hope all our animals will pass, in their sleep. She and Luti were half sisters and I brought them here together 12 or 13 years ago. They couldn't have been more different. Luti was bold and demanding of attention. Pessa was no nonsense, independent and an extremely easy keeper. One thing they did have in common was that they were great mothers, milkers and wonderful goats to have trained me as a goat farmer. In the photo above Pessa is the one on the left and Luti on the right.

Pessa had a wide girth and everyone always thought she was pregnant. She never needed any assistance kidding. Babies practically fell out of her. When all the other mothers left their babies to go out to graze Pessa hovered near hers and wouldn't let them out of her sight. As a matter of fact, all the babies stayed by her. They climbed on her and she never complained. She was everyone's laidback babysitter. She never fought me when it was time to be milked. She came in, ate, gave milk and left. Done. Same with having her hooves trimmed. No complaining. Just give me my feed and do what you need to do. I don't remember her ever being sick either. She was sturdy in every sense of the word. She asked for very little.

Well, that's how she left this world. She didn't need me to pass on either. She was shivering 2 days before in the cold and I worried about her, but then yesterday she was out eating with the rest and all seemed well. While Luti was the herd queen, Pessa was the matriarch. She was the mother of our Breezy, grandmother of Delphi and great grandmother of Sally and Mander. The herd feels very different without these old girls.