This is my grand dog and Baxter's best friend, Maia.  She's a boxer/rottweiler cross who absolutely loves the water.  She wears a life jacket in the river because she's solid muscle and it's a lot of work to keep her body afloat, though you'd never know it to watch her swim.  I'm pretty proud of this painting because it's the first one I've done with water and reflections.  It was super fun.  Here she is standing in the James River. 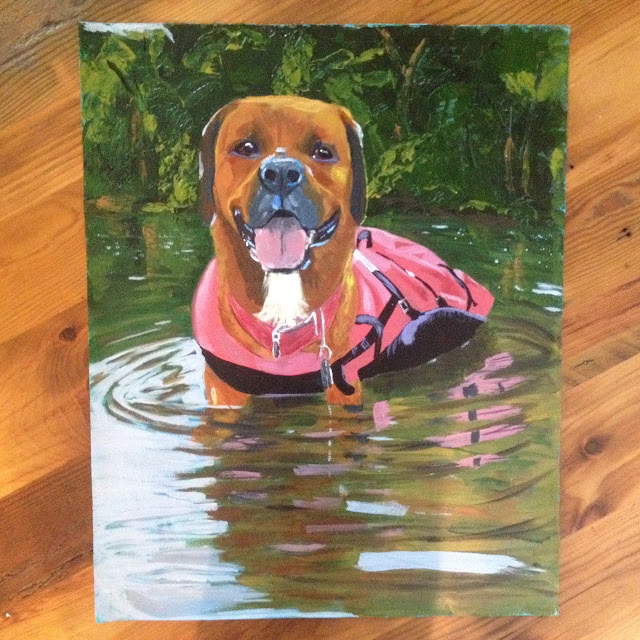 About 2 months ago I attempted to paint James' portrait.  I messed with it for a week or 2 but couldn't get his mouth right, among lots of other things.  I put it away and figured I'd look at it again one day when I got better.  I got it out yesterday after another failed attempt at his portrait.  Well,
I finally finished it.  I think I got the mouth pretty close.  What do you think? 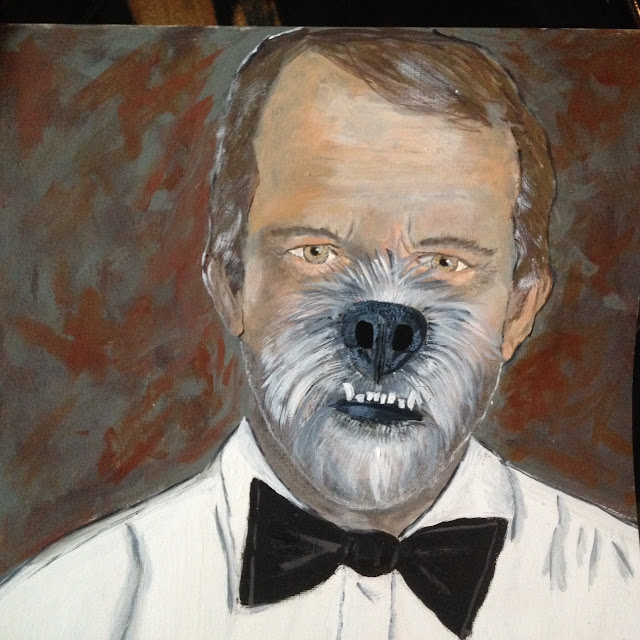 I couldn't decide whether to title this blog Jamester or Poochrait.  I should mention, neither James nor Baxter were offended by this painting.  I asked James' permission to use this in my blog.
Posted by kpannabecker and jpannabecker at Sunday, March 26, 2017 5 comments:

These pictures and videos say it all.  Rex is a wonderful caregiver.  Keri is the fierce protector but Rex is a real softie when it comes to these babies, especially Mona, his bottle baby. 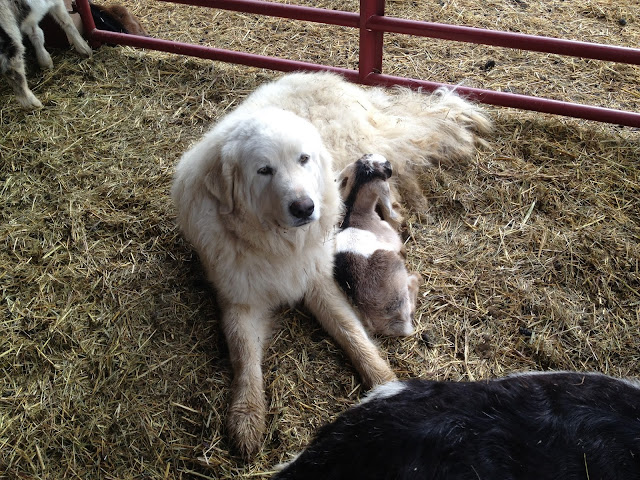 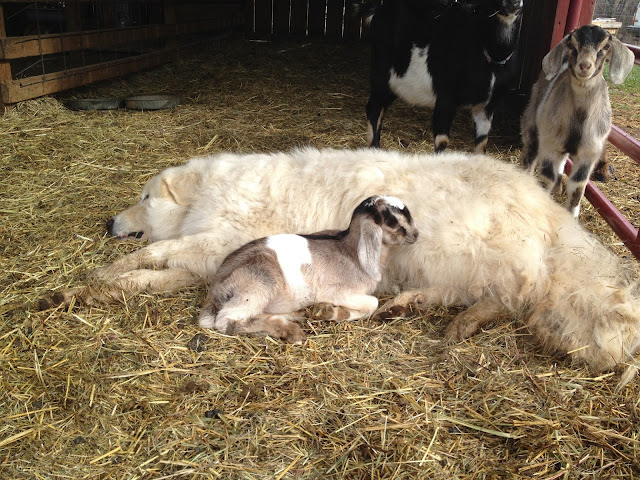 These may be our final kids of the season and I finally got to watch the births.  Darla is a pro and breezed through the whole thing.  A new young friend, Emily, watched with me, so that's how I came up with Emmy and Millie.  I really love both those names.  The one with the funny ears is Millie.  The other girl's ears can't decide what they want to do either.  Sometimes they stand up straight like a rabbit. 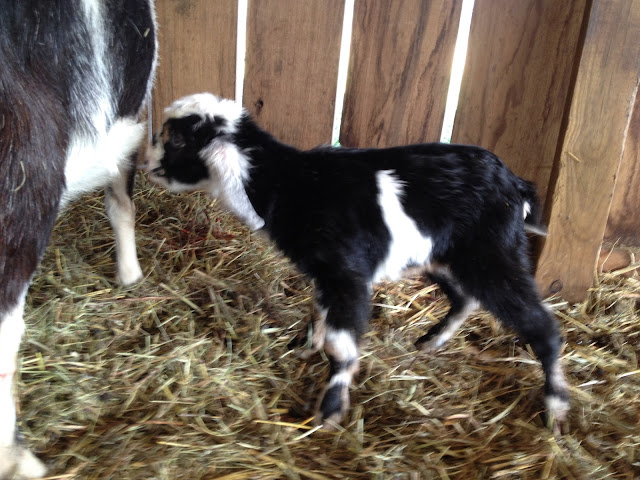 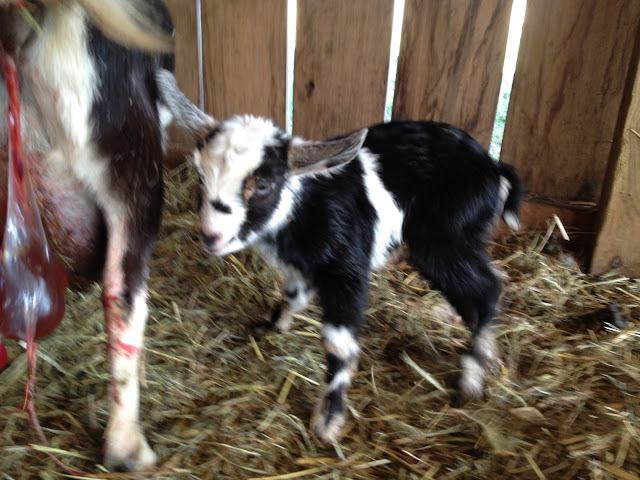 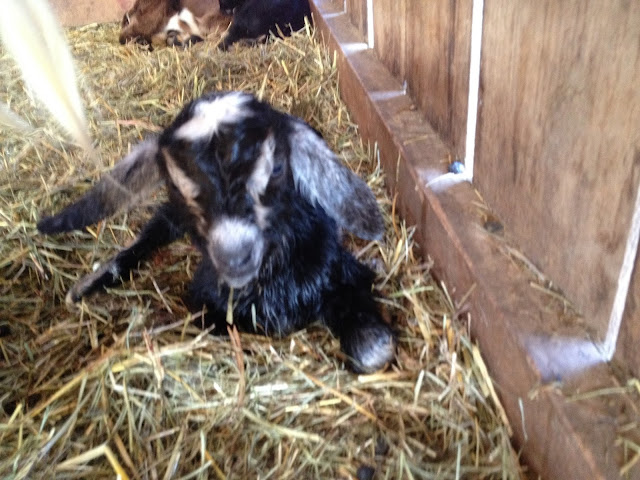 All the other kids are doing well too and are about as sweet as any kids I've ever had.  I just love this little crew.  In a few more days when they're all bouncing I'll get some video to post.  All kids will be for sale this year.  No matter how much I like them, I'm not keeping more.
Posted by kpannabecker and jpannabecker at Wednesday, March 08, 2017 No comments:

Kidding season is not going as I had hoped

Maybe I'm getting too lax about raising goats.  I used to be so careful in my planning of breeding and kept notes about who was bred when, to whom, when they had what shots, what day they kidded on the year before, etc.  This year all planning went out the window.  I think things changed when I moved the goats from the yard over to the field.  Or maybe when I began adding other livestock to the mix.

I had very few due dates for my goats this year and the ones I did have weren't always correct.  I've missed every birth so far.  Lily had hers yesterday morning shortly before I went down to milk.  For some reason she has not accepted Mona.  She's always been a good mom in the past so I don't know what the deal is.  She has made very clear that she only loves Sully, therefore I'm bottle feeding Mona and 2 more kids who arrived yesterday afternoon right in the middle of the field.

Dahlia is a first time mom and had no idea what happened.  She was standing in the field staring down and these two tiny, screaming, sopping wet creatures looking very confused.  I picked them up and carried them to a shelter, calling Dahlia to follow me.  It was windy and chilly.  Instead, when she finally decided to move, it wasn't to the barn but out to graze with the others.  I had to drag her across the field to her kids and block her in there.  She seems interested in them and cries to them but won't let them nurse.  Maybe she'll come around.  They're happy to take a bottle for now.

Fortunately, Dahlia and Lily were more than happy to come in to be milked this morning, so that was a nice surprise.  Most new moms kick a little (sometimes a lot) the first day, especially a first time mom.  I was lucky with Dahlia.  I haven't named her two boys yet.  Rex is being a better father to all the kids than their moms are.  He adores them.  It doesn't hurt that they taste like milk.  He keeps their behinds clean too :)  All 4 kids born yesterday sleep in a pile together.  It's very cute. 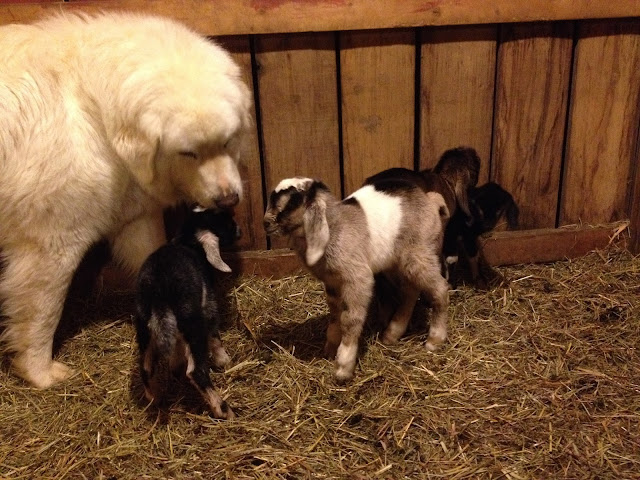 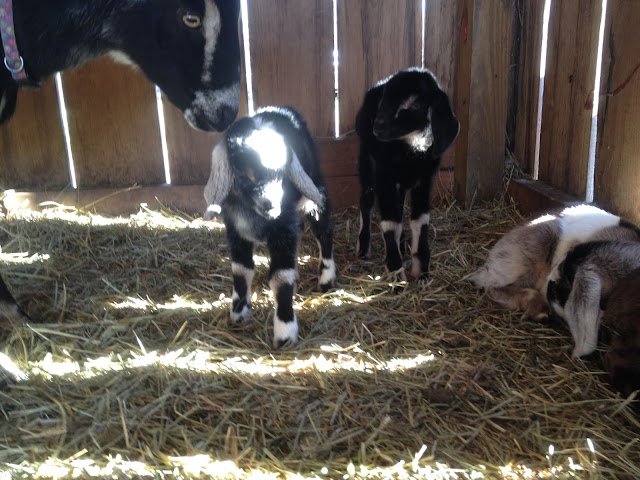 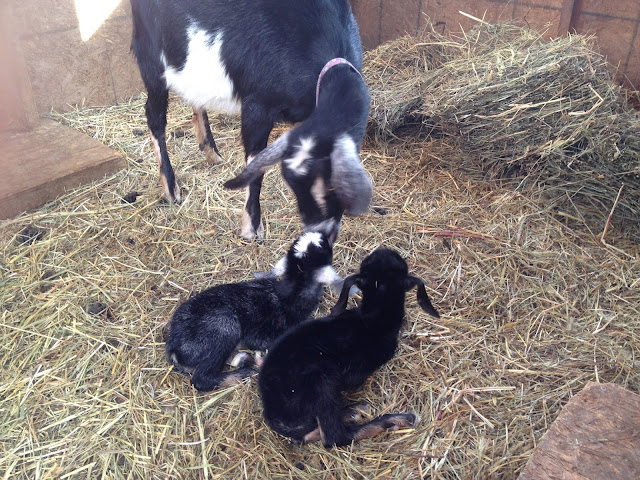 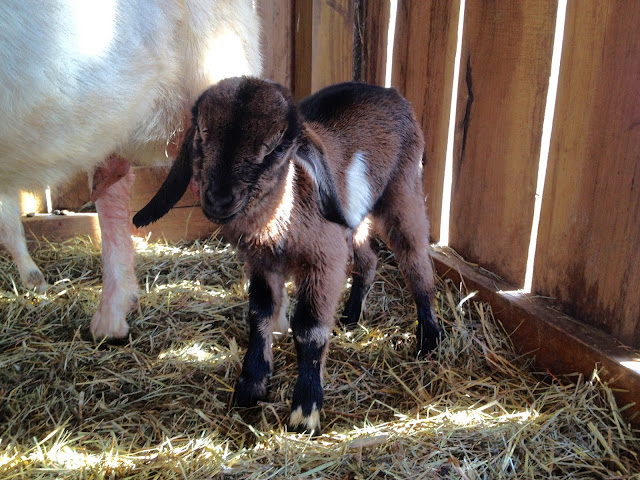 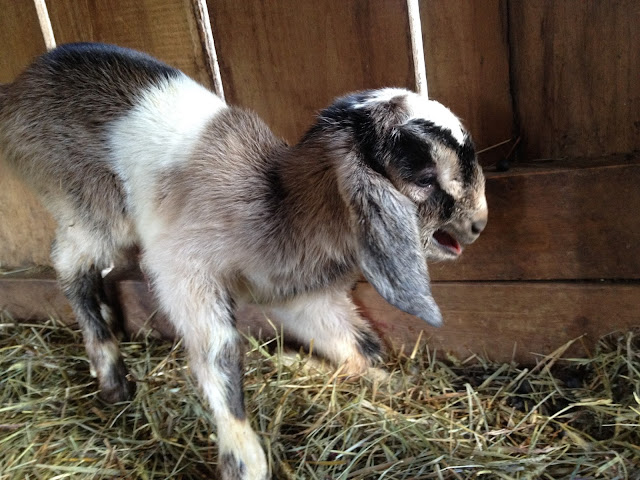 Lily gave birth to a little boy and girl this morning.  The little boy, Sully, is brown and Mona looks just like Petal.  It's funny how similar Mona's markings are to hers.  Mom and babies seem to be doing fine.