Have a seat at the milk bar 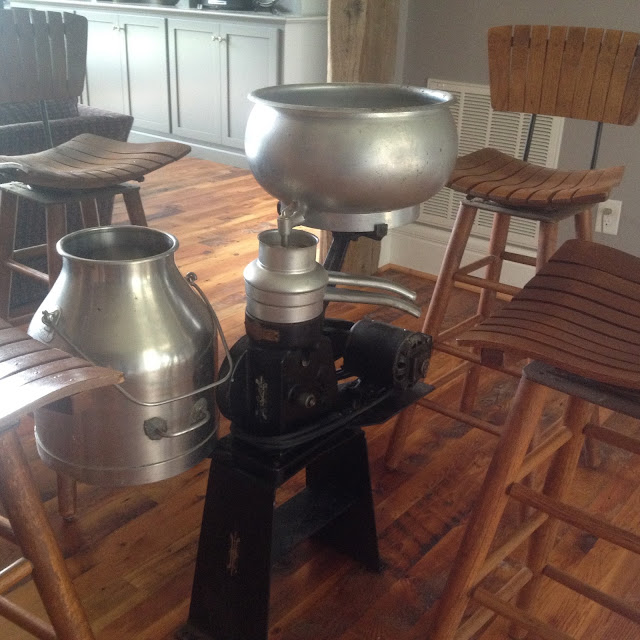 I think old cream separators are a work of art.  This is an old DeLaval electric cream separator that I don't use but do love.  I use a smaller hand crank one.  I hated seeing it sit in our basement collecting dust.  We happened to have this empty space in our new addition just calling out for a bar height table to go with some bar stools we weren't using at our cabin.  The top of the cream bowl was just the right height for a table top.  It took me all of a minute to decide this would make a great table base and a conversation piece.  With a little time on my hands a lots of wood scraps I got to work.  Some friends of ours gave us some leftover sycamore tongue and groove flooring years ago and we hadn't found a use for it yet.  It was pretty easy to put together and the wood is just beautiful.  I love the grain. 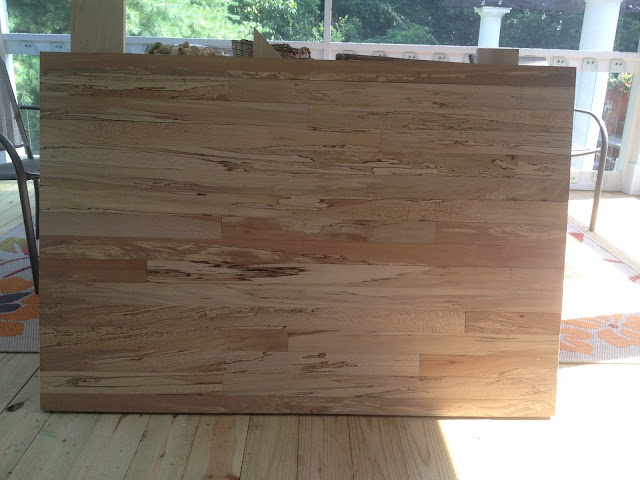 The edges needed to be finished because I didn't like how thin it looked or how the two ends showed the tongue and groove.  Our barns are full of goodies and I found some leftover trim from when the builders were doing our baseboards.  It was just the right thickness for a heavier look to the table. 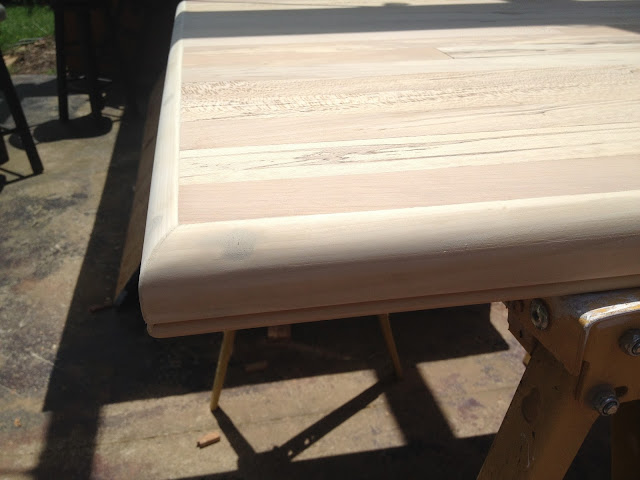 Because I'm not a fine woodworker I screwed it on and then filled the holes with wood filler.  Because of this I had to stain the table.  It took away a little of the beauty of the natural wood but it still looks ok, I think.  I sealed it with a couple coats of polyurethane. 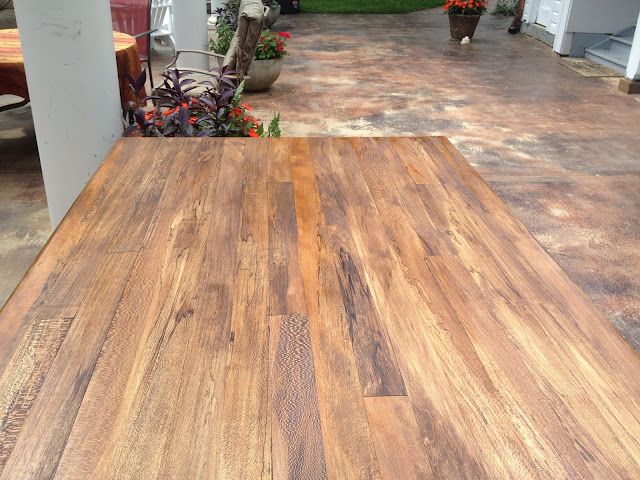 It wasn't sturdy enough sitting on just the milk bowl so I had to figure out a way to make it sit more solidly. 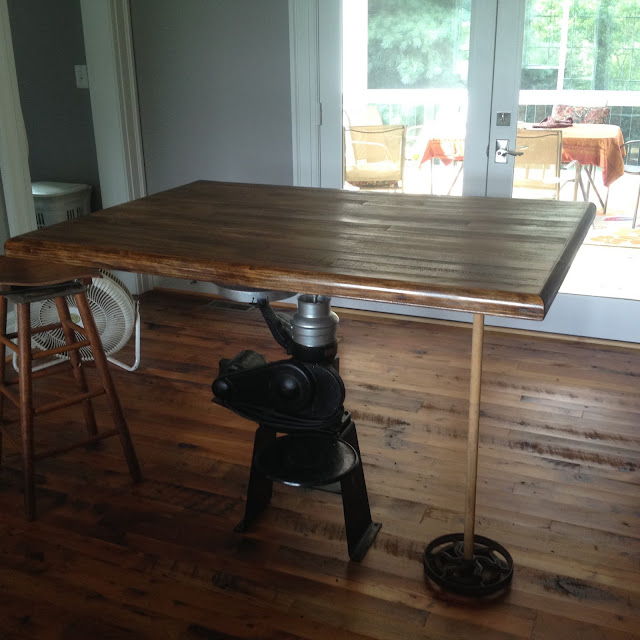 After much experimenting I decided to buy some 3 prong hairpin legs.  I wish I could say I made them myself but I didn't.  Maybe soon.  I'm signing up for a welding class in August.  Then James will be in lots of trouble.  I'm really happy with the legs.  I probably could have gotten away with using just 2 but I think I'll keep 4 on.  Here it is completed.  It's nice being able to put your feet on the cream separator.  I didn't damage it in any way and it could still be used to separate cream. 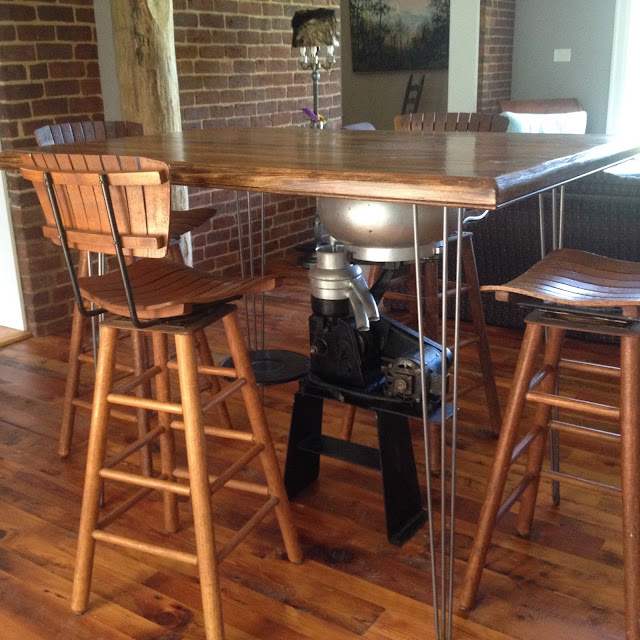 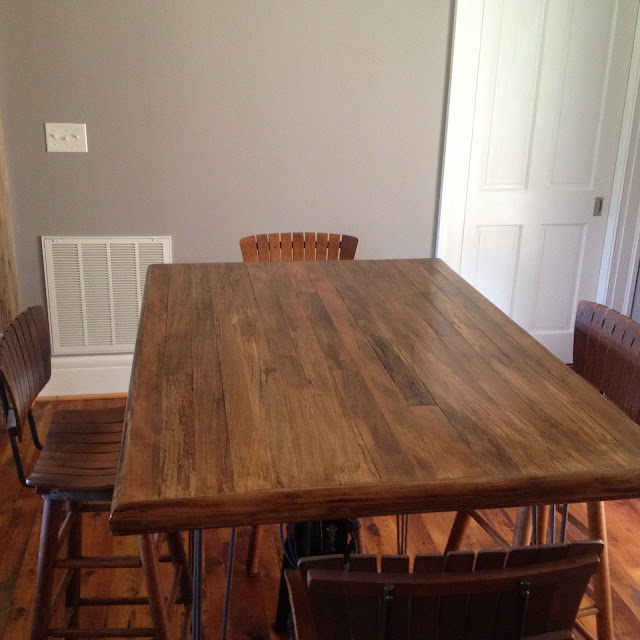 Some of my ideas are good and some are questionable.  Remember that floor lamp I built from random objects a while back?  This week it got a new hat.  I have a feeling this lamp will be ever-changing. 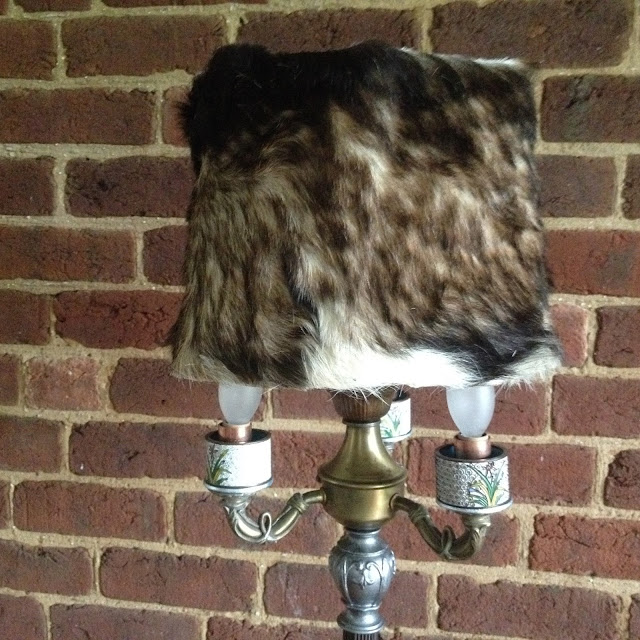 It sits beside our very useful tom-tom side table. 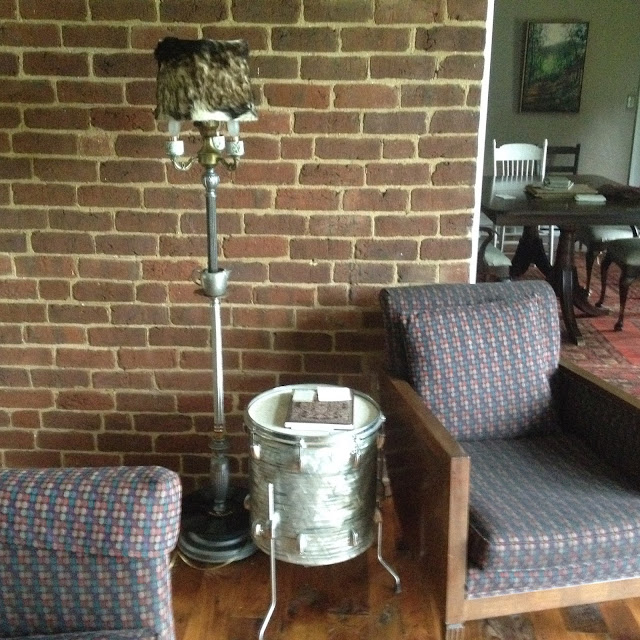 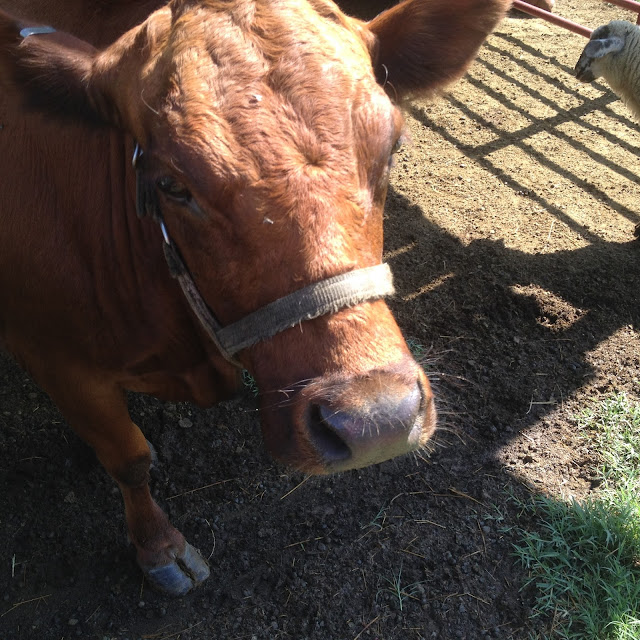 I don't know what made me think I was the boss of an 800 or 900 lb cow but this morning Raisa made it perfectly clear that it isn't the case.  She is due to calve (if I have this right) the first week of September so it's time to dry her up and she's not happy about it.  Today was the second day of not milking her.

For those of you who haven't been here, there are two stalls to my milk barn.  One has a milk stanchion in it and is pretty large and the other is half the size.  Both have gates on them but I usually
keep the empty one open.  In the mornings the goats and Raisa are there waiting for me. 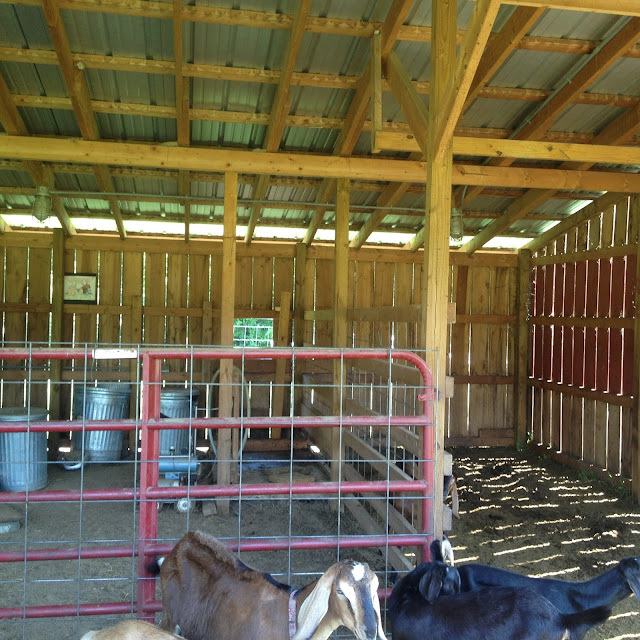 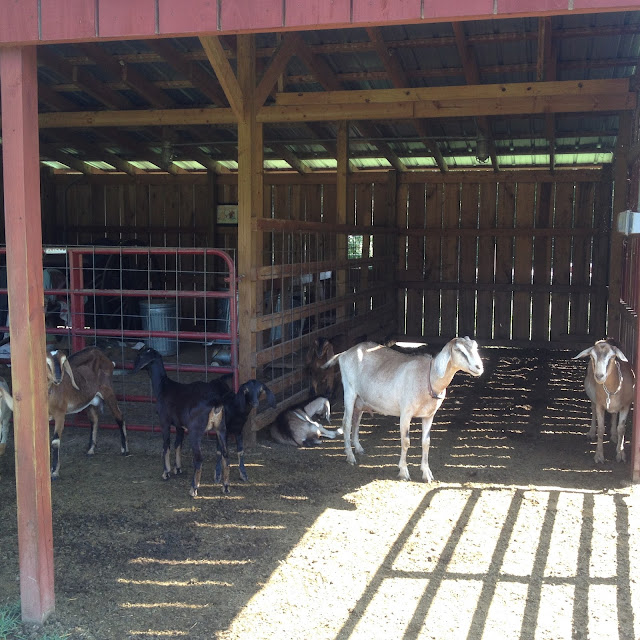 This morning Raisa was waiting in the open stall all by herself.  I closed her in there so she wouldn't attempt to push her way into the milking stall.  This is when the trouble started.

To keep her happy I filled a bowl will food and pushed it under the wall.  She was so unhappy with this situation she backed up to the food bowl, lifted her tail and began to poop but not before I quickly pulled the bowl away.  I thought this might not have been on purpose but I learned a minute later that indeed she knew exactly what she was doing.  She got angrier and started pacing and pushing her head against the gate.  I ignored her and let Luti into the milking stall.  As Luti entered the stanchion Raisa backed up to the wall, which is only a few 2x4s covered with cattle panels, and with the force of a fire hose literally showed me how pissed off she was.  She sprayed her pee through the wall onto the stanchion and Luti and it ran down onto the cushion I kneel on. Strangely enough, Luti didn't care.  She continued to eat.  I was dumbfounded.  It took me a few minutes to regroup and decide what to do.  What could I do?  I let her out of the stall.  Another mistake.

She immediately shoved her way to the front of the line so she could enter the milking stall next.  I couldn't figure out how to get Luti out without Raisa and all the other goats coming in.  That's exactly what happened.  One large cow and 5 goats plowed their way past me and Luti decided she was going to stay also.  Raisa stood in the stanchion waiting with 2 goats on either side while 2 more ate from a pan nearby and Luti hid behind the donkey cart so I couldn't get her out.  I did put one back out.  While Lily stood beside Raisa I decided I might as well milk her.  She was fine with that.  After dragging a few goats out I sat on the feed can (so Luti wouldn't open it with her mouth) and turned my back toward Raisa.  I didn't milk her or give her more food after sharing with the goats.   Normally I give Raisa lots of scratches and kisses when she's done but this morning I ignored her hoping she'd back out of the stanchion and go on her merry way.  She was not going to be ignored.  She stood there for probably 5 minutes and then began tapping me on the arm with her nose.  How could I resist  showing her affection when that's really all she wanted?  I don't know what she loves most about coming in to be milked in the morning.  I used to think it was the food but now I'm thinking she wants the attention.  For the past few months she won't back out of the stall until I give her a few minutes of scratches and love.  So that's what she got.

I don't know what I'm going to do tomorrow morning but I need a new strategy.  I bet Raisa is working on her own.   I'm pretty sure she won't be waiting in the open stall.  She's too smart for that.
Posted by kpannabecker and jpannabecker at Thursday, July 14, 2016 2 comments:

My very favorite show on Netflix is Chef's Table.  There are only 12 episodes so I like to savour each
one.  It would be easy to watch one after another but then I'd be done.  As it is I think I only have 2 left to watch :(    The show inspires me to cook and try to display my food in a way that isn't just the same-old-thing-Karen-usually-cooks.  I've been in a cooking funk lately.

Last night's episode was about Enrique Olvera, a famous chef in Mexico City.  I rarely cook Mexican food and when I do it's your basic ground beef with taco seasoning, salsa, onion, lettuce, etc. in a flour tortilla.   After watching Chef Olvera I got an idea.  We have lots of dried up glass gem corn saved from either last year or the year before.  We thought there wasn't much you could do with it besides grind it up to make a so-so corn meal.  It's meant to be decorative.  It really is this pretty. 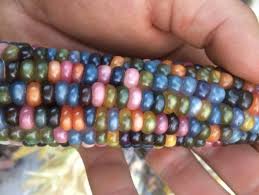 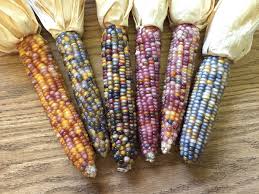 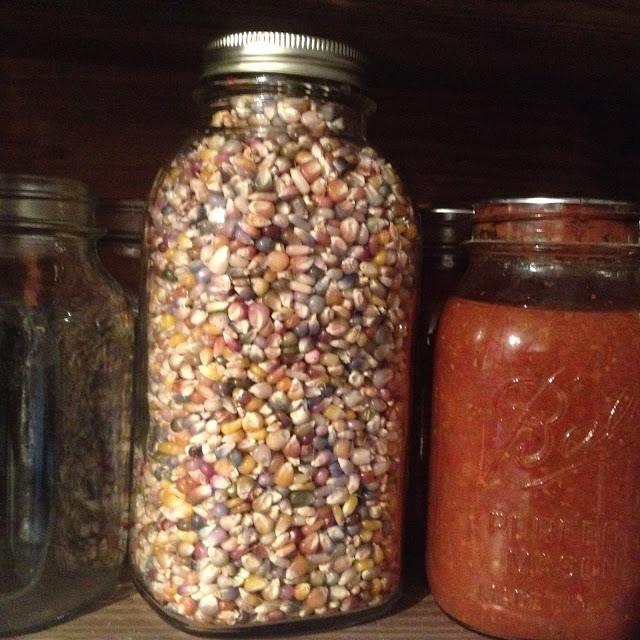 The half gallon jar of corn pictured above is what we have left.  It can be eaten as popcorn but we didn't have much luck with that.  Few kernels popped and they were very tiny.  Last night I decided to boil some of the corn.  I cooked it for at least 2 hours and then let it sit in the water overnight.  It loses its color and turns a dull yellow after boiling.  This afternoon I drained the water off and put the somewhat soft corn in the food processor.  After a minute or two I looked at it and was disappointed to see it looked like chopped up corn (I know what you're thinking) and I could still see the hulls.  I scraped the sides of the bowl and turned it back on while I went to change clothes.  When I got back there was a ball of dough in the food processor.  I was so excited.  This ball of dough is just from my soaked glass gem corn!!!  Can you believe it?  All you Mexicans (surely at least one Mexican reads my blog.  Hopefully not Enrique Olvera) are probably shaking your head at my excitement and stupidity.  As I said, I don't usually cook this kind of thing. 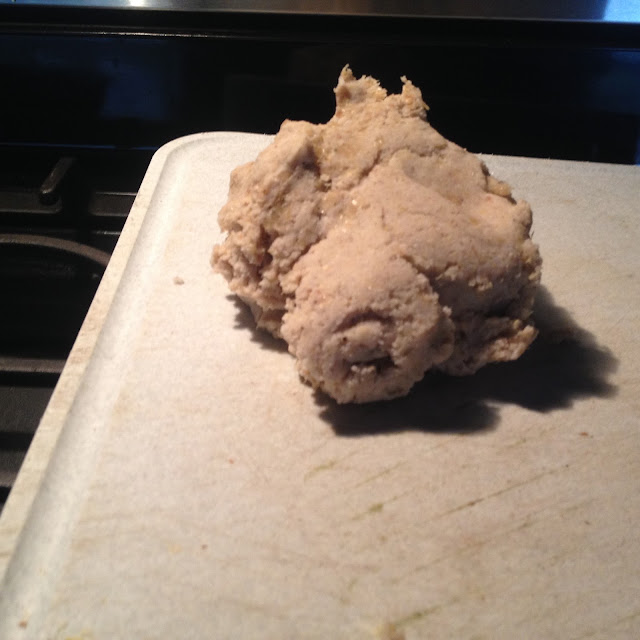 I was hoping to make corn tortillas out of them but read this morning that you must use masa harina.  See http://www.thekitchn.com/how-to-make-corn-tortillas-from-scratch-cooking-lessons-from-the-kitchn-85904  I thought it was worth a try.  I formed the dough into balls the size of a ping pong ball then placed one in between two pieces of parchment paper.  I used a rolling pin to roll them very thin since I don't own a tortilla press.  I placed the thin dough into a very hot cast iron skillet and cooked it for maybe a minute on each side.  I'm just guessing at that.  I could never write a cookbook.  I have no idea what the water content was in the corn either. 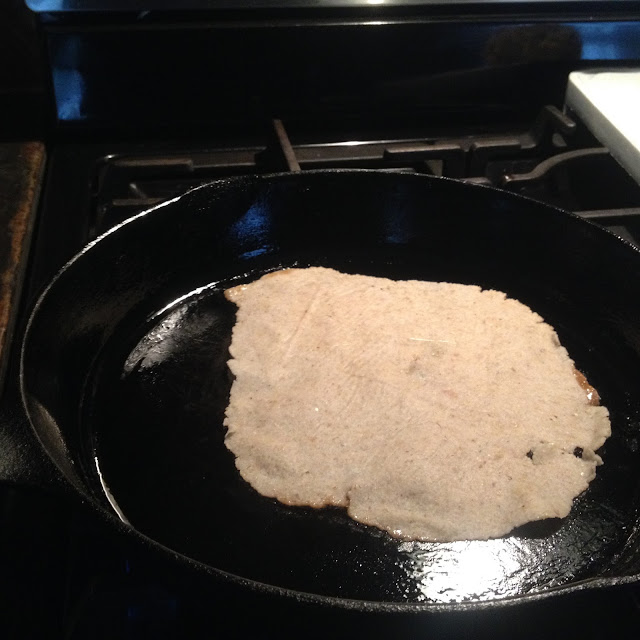 They may not be perfectly round but I think they turned out pretty nice. 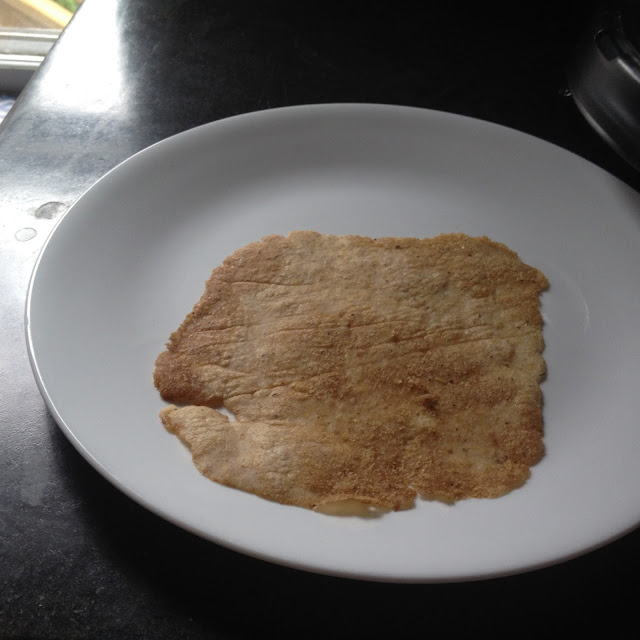 I also made the filling differently than my usual taco or fajita.  This time I cooked the onion with some anise seeds and cumin then added the ground beef.  No taco seasoning.  I must admit I added some store bought salsa.  The addition of the anise seeds is an amazing discovery for me.  It makes it so sweet and flavorful.  We're getting tomatoes from the green house now so we had some of them on top, in addition to some of Raisa's cheese.  If I remember I'll definitely make these again. 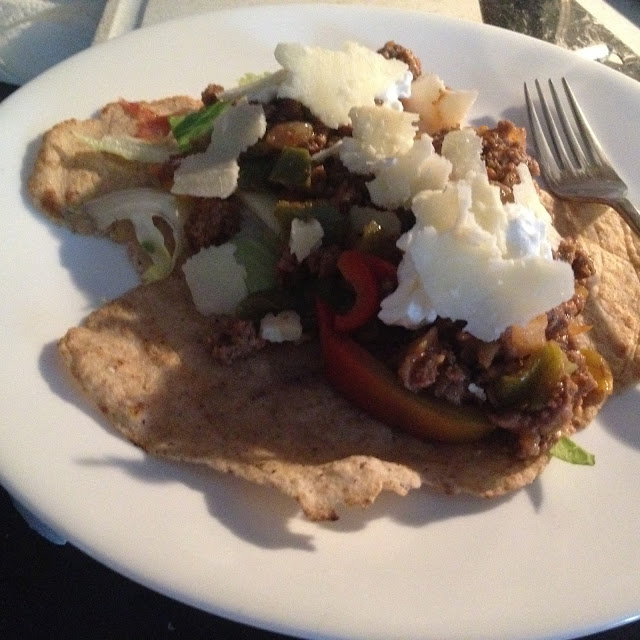