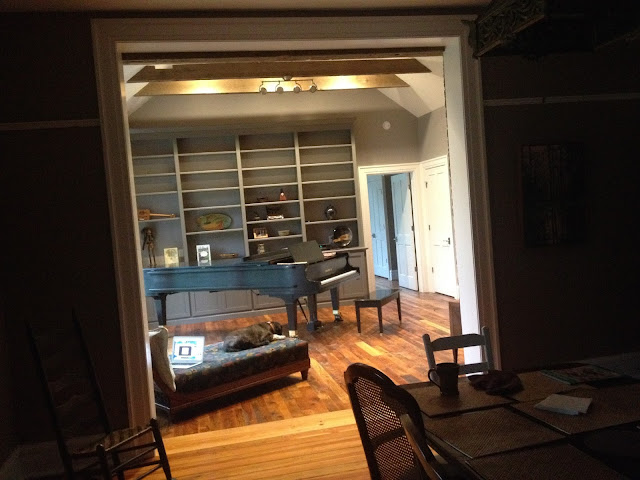 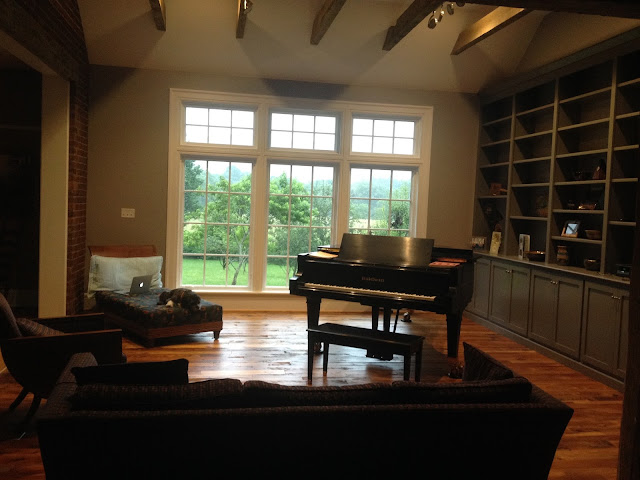 If you look very, very closely you'll see the piano is smiling.  After much anticipation of having James' piano in our living space, it's finally here.  The piano was the biggest reason we added on to our house.  It has spent the past 14 years in our cabin where mice could tickle the ivories when James wasn't.  They also left their calling cards to let him know they'd visited.  Not the best conditions, to say the least.

The piano movers arrived Wednesday afternoon.  There were 5 men, led by Rick DeLange, needed to move an 1100 lb instrument.  After the move he expressed that he approached this job with a bit of trepidation.  He's moved many grand pianos but not many concert grands.  After the piano was resting safely in its new space he told us he had watched piano fail videos the night before.  It's good we didn't think to do that.

I didn't go to the cabin to watch the move out.  I really expected James to be more stressed than he was.  When they arrived back at our house he was smiling and seemed very confident in the mover because, "he was so methodical".  He and Rick both said that was the easy part.  Getting it up our steps to the screened porch presented more of a challenge, though I thought it went rather smoothly.
https://www.youtube.com/watch?v=hKiLoNfenWU&feature=youtu.be 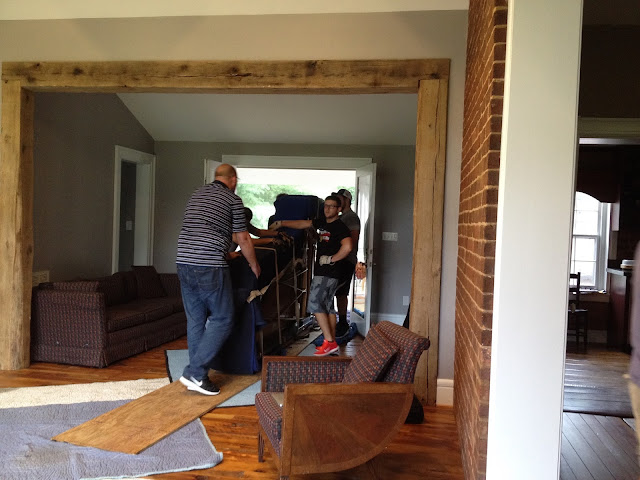 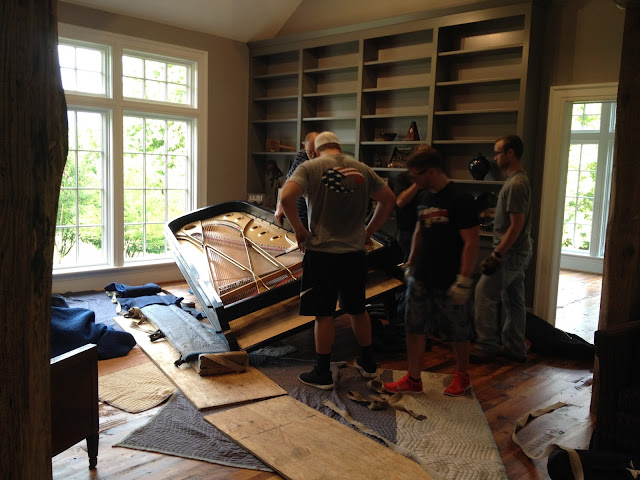 The piano sounds bigger in this room than it did at the cabin which could be because it's in a bigger space with no rugs.  I think it sounds great.  I think James agrees.

Some friends came by to watch the end of the move and be the first to celebrate the occasion with singing and lots of laughing.  I'm just posting a photo and not the video to protect the innocent. 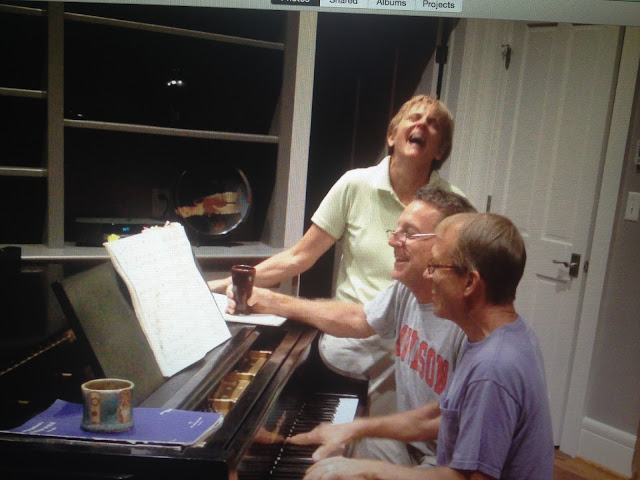 I look forward to many years of nights like these.  I can't describe how much I loved that the next morning James walked out of our new bedroom a few steps and played Oh What A Beautiful Morning. 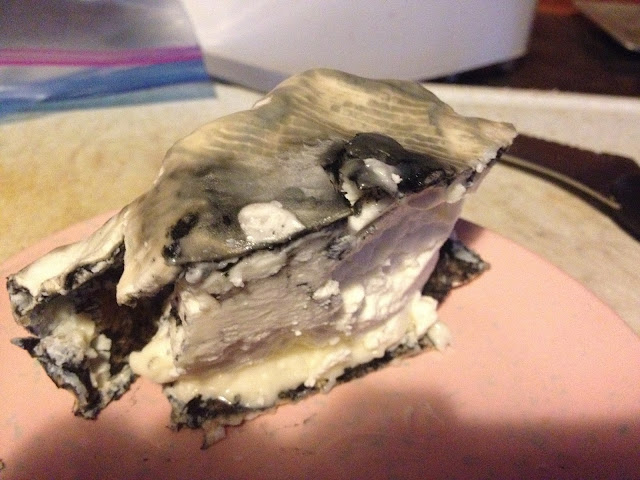 I'm no expert on cheese, that's for sure, but I do know that you can't judge a cheese by tasting it or seeing it one time or at one age.  Above is a soft, moldy (penicillium candidum) goat cheese, which is one of my favorites.  I know it doesn't look very appetizing but if you like goat cheese with a little punch you may like it too.  This one is about a month old or older.

Today a friend of mine posted a picture on Facebook of a similar cheese and said it wasn't as pretty as mine but it was much softer.  I think he's in Austria now but I thought he was eating a French cheese.  Maybe I'm wrong about that.  He was in Italy a few days ago so I'm uncertain where this cheese was.  I thought about his remark and realized he was comparing one or 2 cheeses he's had of mine when they were young.  If he would have tasted them a few weeks later they would have been soft and gooey and maybe not that attractive and for sure have a stronger bite.

I've been making cheeses for 6 or 7 years now and I still feel like such a novice.  I get just as excited and surprised when a cheese is delicious as I was when I first began.  I'm definitely much more consistent in making good cheeses (at least edible ones) these days.  My pigs used to be the recipients of many a bad cheese.  One thing I'm still trying to figure out, but getting better at, is how cow's milk and goat's milk behave differently.  I'm far from understanding how to treat milk (either cow or goat) at different stages of lactation and how much cheese the milk will yield.  I suppose it would help if I kept detailed notes (or any notes, for that matter).  Maybe in a blog 7 years from now I'll be bragging about my cheeses and how I've finally figured it out.  In the meantime I'll keep stirring and cutting curds and hoping for delicious outcomes.

A friend was visiting yesterday and took these pictures.  My favorite is of me and Raisa.  How can a cheese made from this girl's milk be anything but sweet. 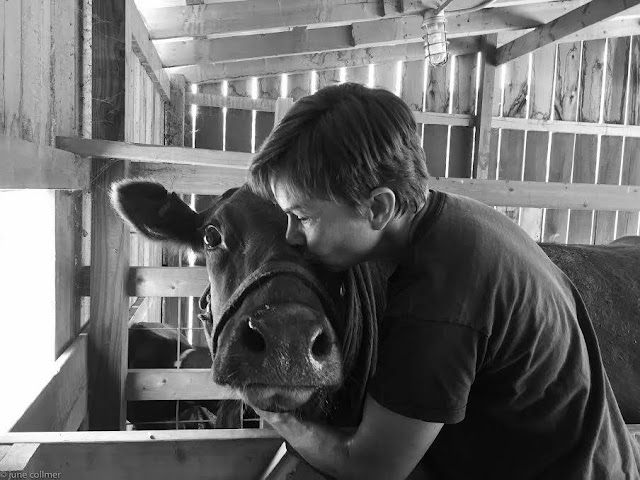 My goats are giving me very little milk these days because I haven't separated them from their kids and the kids are big and hungry.  I know I need to do it soon but I hate making that transition.  Lots of tiny udders lately.  I'm not going to get much cheese from these girls as long as kids are on them. 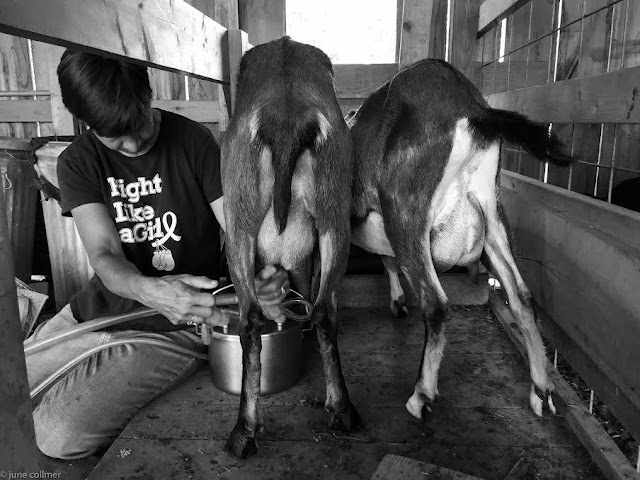 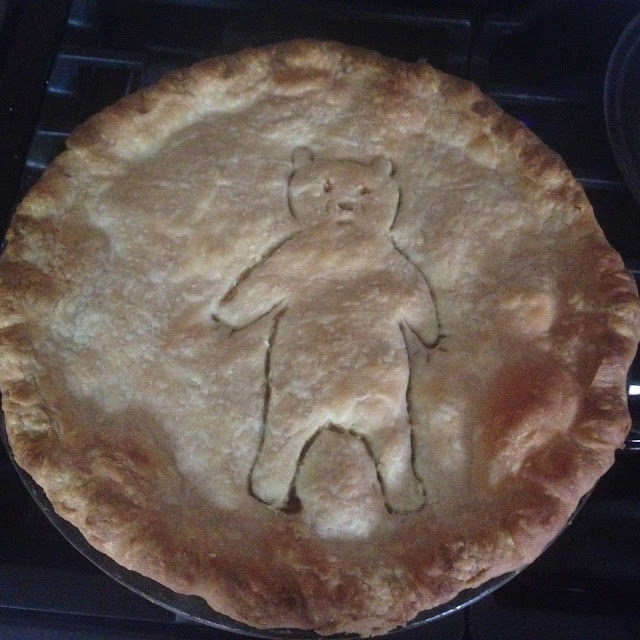 Last night James and I joined 3 other couples for a Thai dinner.  Several months back we had an Indian dinner which we all made our version of Indian dishes.  Super delicious.  Last night's dinner was equally as yummy.  My contribution to the dinner was probably as far from authentic Thai food as you could get except for the fact that I used seasonings that you'd find in Thai food - Thai green curry, fresh ginger, garlic, lime juice, fish sauce, peanuts........  I'm not real sure they make pot pies in Thailand but I do know they have bears there so maybe they eat bear but bear pot pie??  Not so sure.

Our friend Manley brought us some bear meat when he was here for Adam and Melissa's wedding last week and I couldn't resist sharing it with friends.  Thank you Manley.  I thoroughly enjoyed it.  I even had it for breakfast this morning.  Everyone ate it last night so I considered it a success.

I think our next dinner gathering for these couples is a meal of hot dogs.  How can I be creative with hot dogs?  Love a good hot dog.
Posted by kpannabecker and jpannabecker at Sunday, June 19, 2016 No comments: