Chy and Wilson have a new home

I had been going back and forth about this for a long time and recently decided I was making the right decision to find a new home for Chy and Wilson, my 2 standard donkeys. 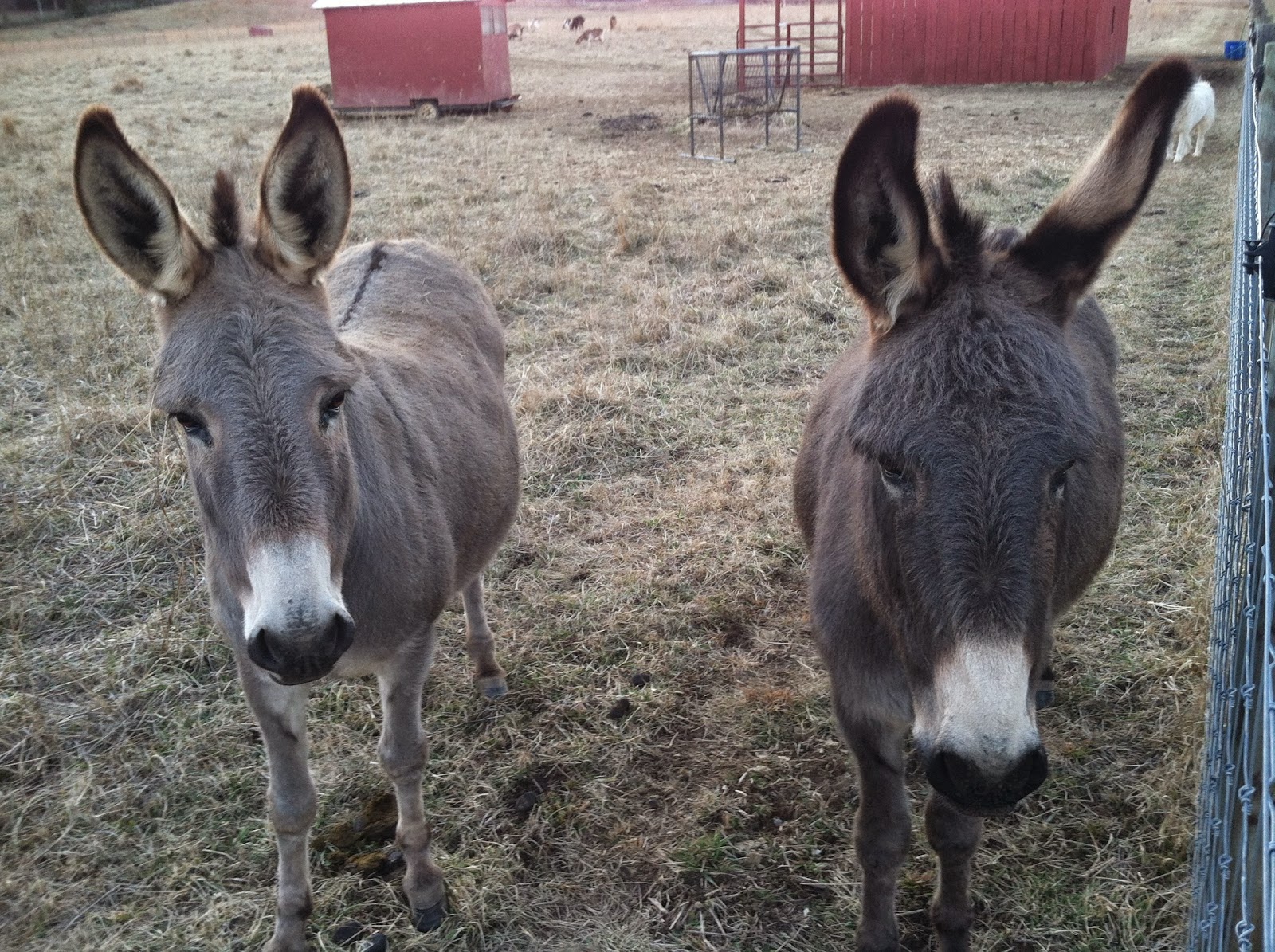 The goats will be kidding in a few more months and things will be getting busy here.  After reevaluating what our goals are for the farm I decided it was time to slim down and make room for my animals that produce food.  As much as I love Chy and Wilson, I knew it was time to let go of my giant pets.  I'm thrilled I found a home where they could stay together.  They're living with a single donkey who needed companions and I couldn't be happier with their new home.  Their dad is just the kind of person I'd want them to be adopted by.  Oddly enough, they are living on a farm also on the James River.  What are the chances of that?  As they drove away I shed just a few tears but seriously I couldn't be happier for them.  It was a good move for all of us.

Jaz and Willo, the mammoth donkeys, snuck through the electric ribbon during all the commotion of the move and are now cohabiting with the goats, cows and dogs.  They're a little calmer and kinder to the other animals at feeding time and I love to see everyone sharing without being bossy. 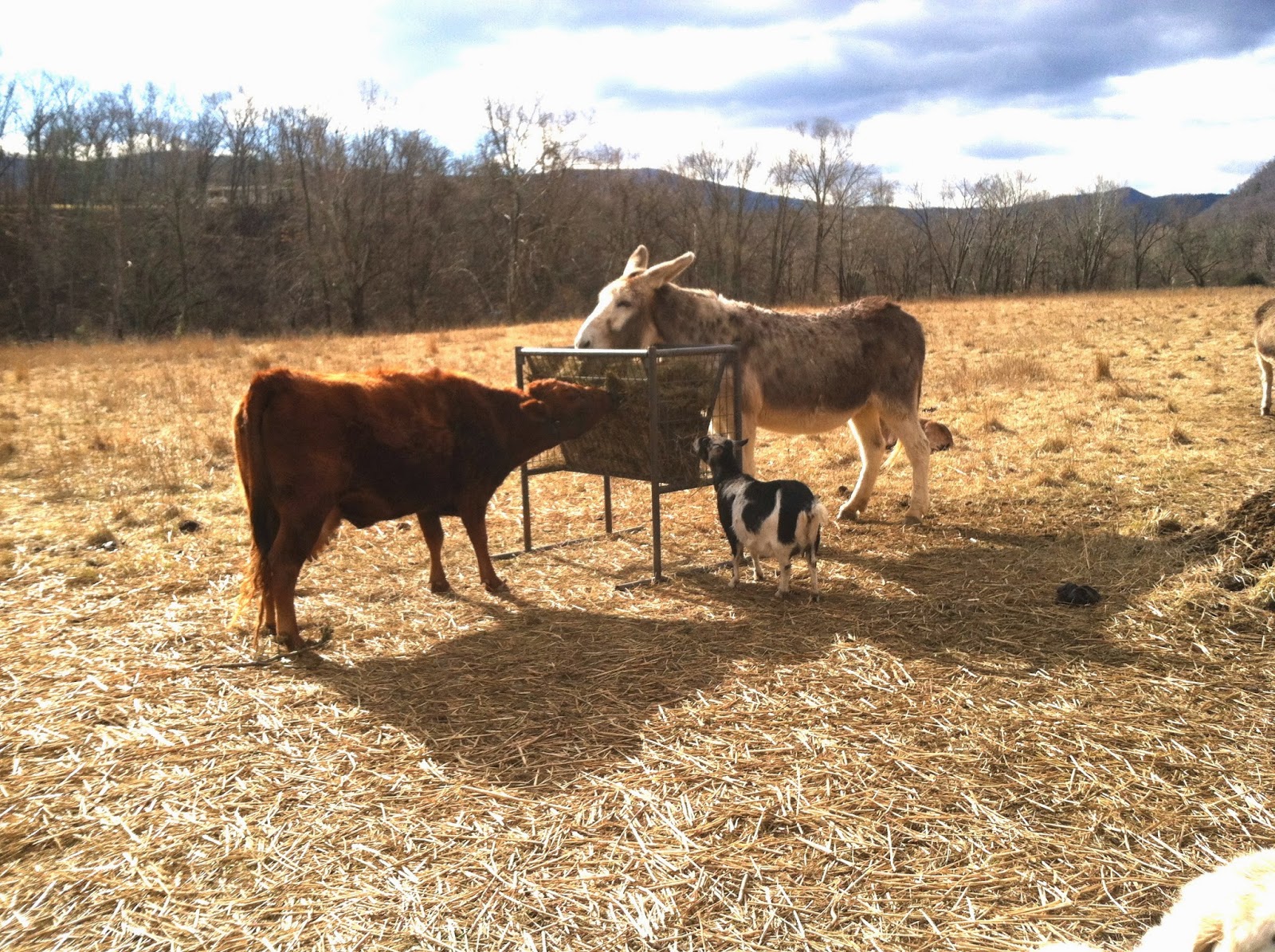 On a sad note, we also said goodbye to Roxie recently. 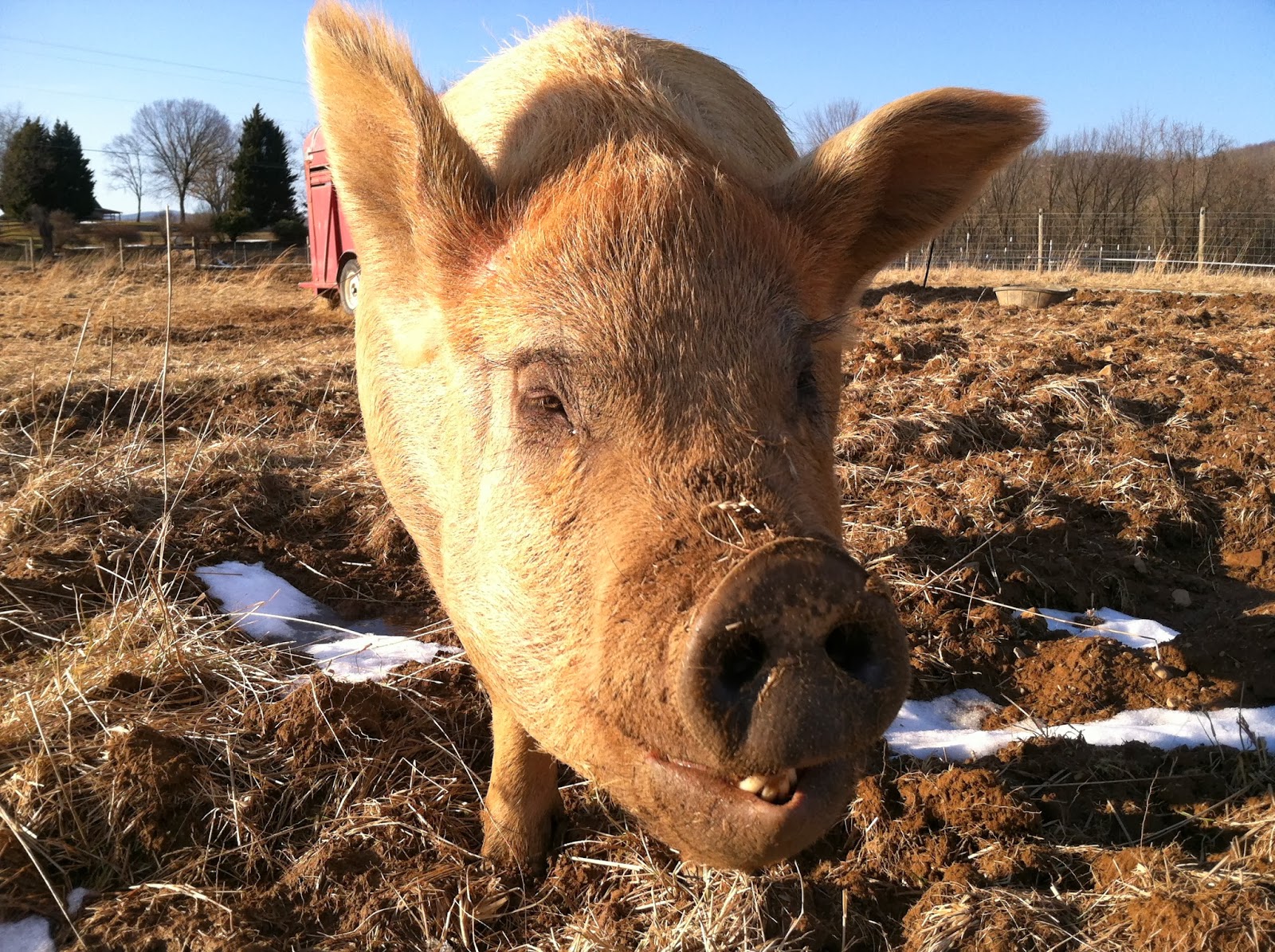 Typing this puts a lump in my throat because she was the best first pig a person could have asked for. Unfortunately, she wasn't reproducing and was starting to lose weight so I decided it was time to let her go.  Being the gracious pig she was, she very calmly walked into the trailer when the time came and when we reached the butcher she walked out just as calmly where we said thank you and goodbye.  There was no stress on her end, that was clear; maybe a little stress on my part.  Joe, our wonderful butcher, told the man doing the killing that this was my very first pig and they showed compassion that you wouldn't expect from a butcher.  That's why we go there.

So now we move forward.  This is a calm time on the farm.  I'm only milking Raisa, and the goats are growing bigger, showing signs of new life to come.  I'm hoping Papa bred Raisa and we'll have a new calf next October.  Mickey, is getting rounder also and will be giving us more piglets in another month or so.  I've ordered chicks, both layers and meat chickens and they should arrive mid February.

Winter can be hard on the farm but it's also a time for planning.  I'm looking forward to spring and what's to come and feeling hopeful.  I'm also feeling grateful.

James and I returned today from a brief trip to Salisbury, NC where we celebrated the 80th birthday of our dear friend Bob. 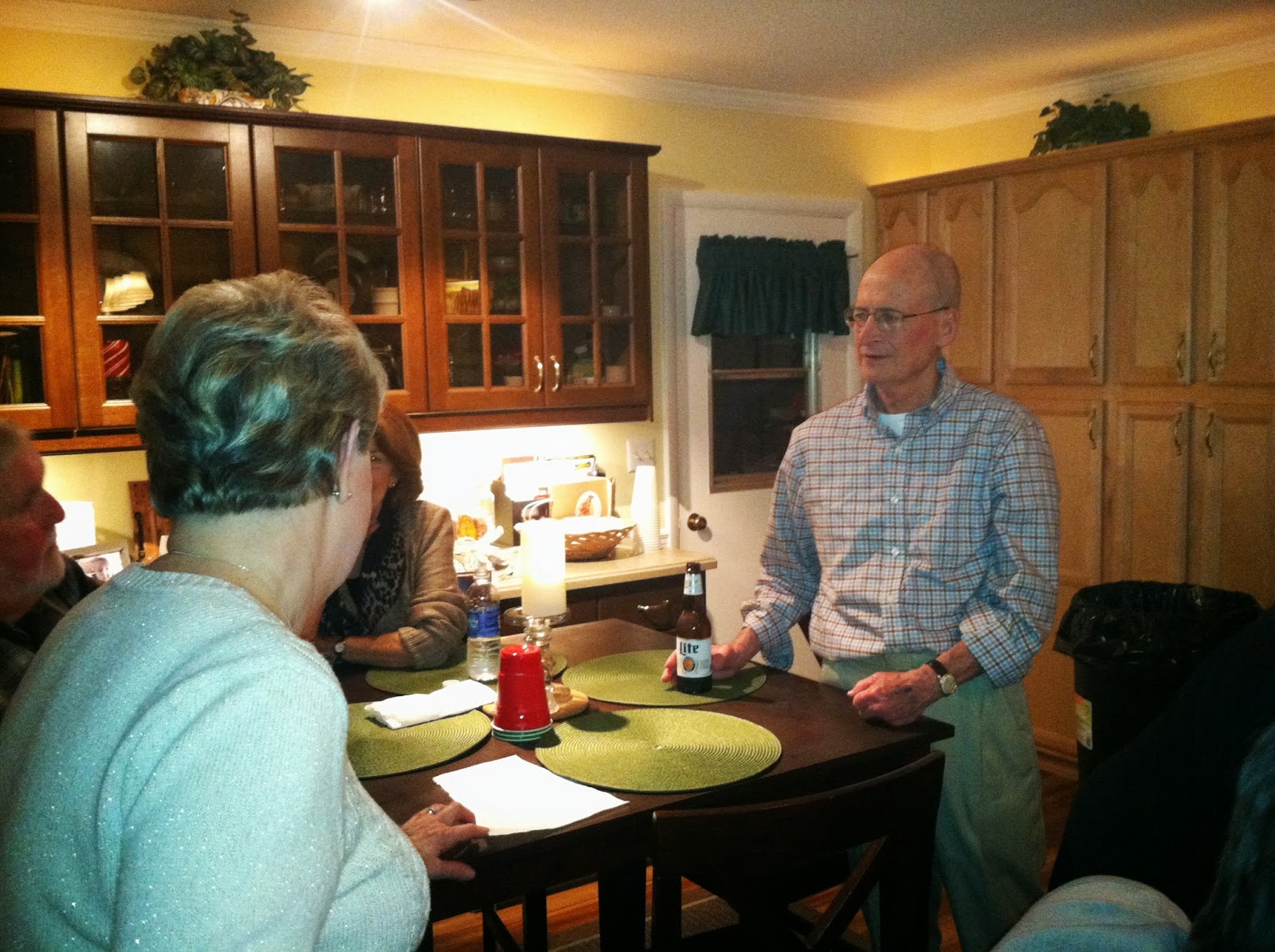 Bob is the fittest 80 year old I know.  We met him through our running club about 19 or 20 years ago.  He hasn't run for a few years now but is still the picture of health.  Gosh, I hope I look as good and stand as straight when I'm 80.  What a great night it was.  Bob, I can't wait to post a video of your 100th birthday party. 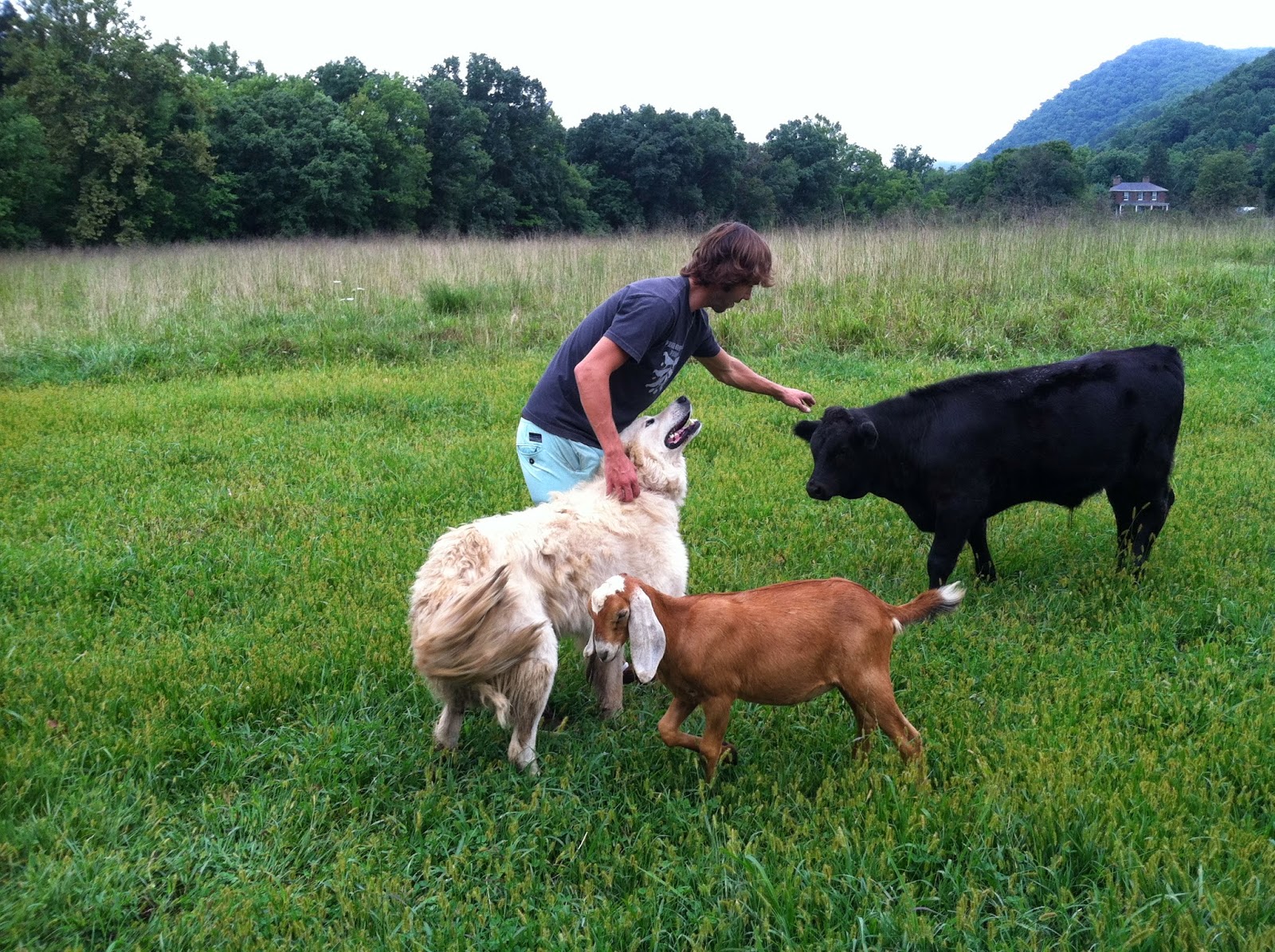 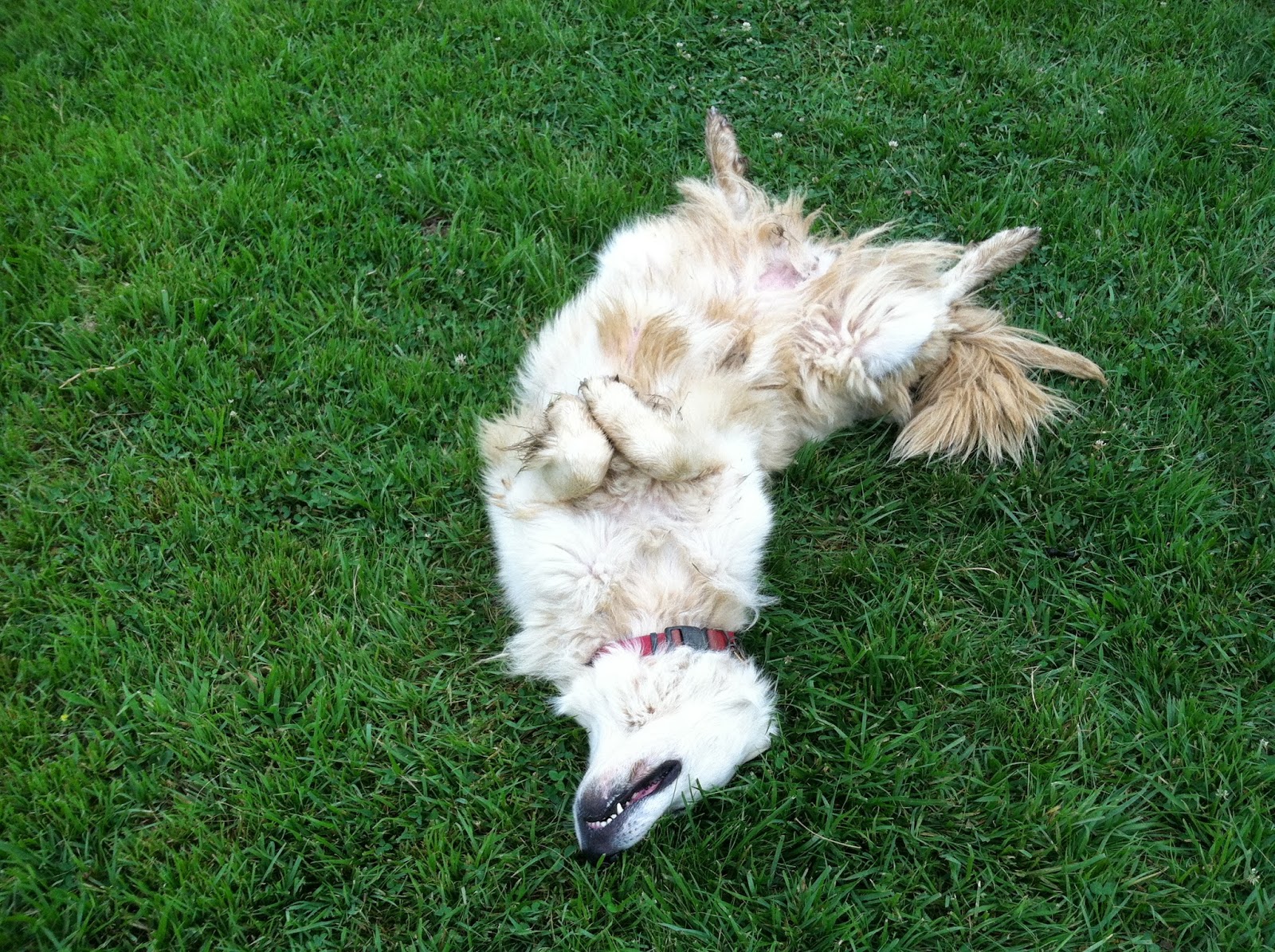 To look at our great pyrenees, Keri, you'd think she's a real sweetie, a friend and protector of human and animal,  and sometimes very silly.  BUT, she has a very serious side too.  Anyone who knows great pyrenees knows how protective they are of their flock.  Flock being anyone who lives on her property; cow, goat, donkey, chicken, pig, dog, human, etc.  I've done lots of reading about the breed and I think I understand them pretty well now.  They can be sound asleep one minute and then ready for attack in a second if something is a threat to their family.  I couldn't ask for a more loyal and helpful dog than Keri.

That being said, poor Rex had to earn his place on the farm.  Keri had to be sure he posed no threat to her flock.  It took her about a week to back off and be more patient with him.  She laid him flat many times.  She never hurt him but she made it very clear with her growls and posture that she was in charge and he needed to learn the farm protocol.  He has learned and I'm pleased to say they've become great buddies as evidenced by this video.  It's been wet here lately so they're filthy.

There's been a discussion going on on my Yahoo goat group about vets.  Some friends have been through some difficult times this week in regard to their goats.  It's so hard to lose a beloved dog or cat and most people understand that, but not everyone would understand how losing your favorite goat can be just as heartbreaking.

One friend had a goat come down with polio this week.  Shelley recognized the symptoms very quickly, did her research and then dosed her heavily with thiamine.  She was lucky to have some on hand and it appears her goat, Star, is going to be ok.  She was lucky to be familiar with the symptoms of the disease, knew how to treat it and happened to have what she needed on hand.  It's a reminder for me to check my refrigerator and medicine shelf to see what I have and what's out of date.

Another woman in our group wasn't so lucky.  Barb's goat had similar symptoms to Shelley's but it wasn't polio.  It was listeriosis; a disease that affects the brain stem.  She had a vet out but didn't feel he gave her goat the attention she thought she deserved and when she called him back the next day saying it was an emergency he couldn't make it and sent another vet the day after to put the goat down.  She's angry and upset and now feeling guilty.  We'll never know if her goat could have survived if treatment was different, action taken earlier, or if another vet was available.  Listeriosis is a horrible and deadly disease.  Whatever the reason, it began conversations about the availability of a good farm vet.

I'm lucky to have great vets nearby.  The clinic has both small and large animal vets.  Some of them treat both.  This week I took my dog, Baxter, to the vet because he has ear infections.  When the vet entered the examining room she said, "Oh, you've added a new dog.  How's that little goat of yours?"  This vet hadn't seen me in 3 1/2 years.  She moved to W. VA but was filling in for another vet who's out on maternity leave.  She's the vet who treated Darla when she had that horrible abscess that almost killed her.  Remember that?  There were probably at least 5 blog postings about Darla's surgeries and progress.  http://holesinmyjeans-kpannabecker.blogspot.com/2011/06/value-of-pet.html  Here she was back then. 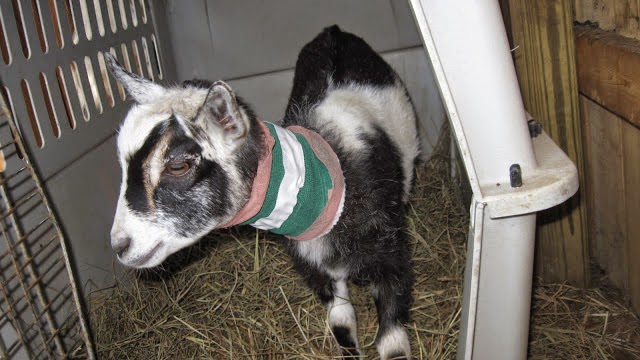 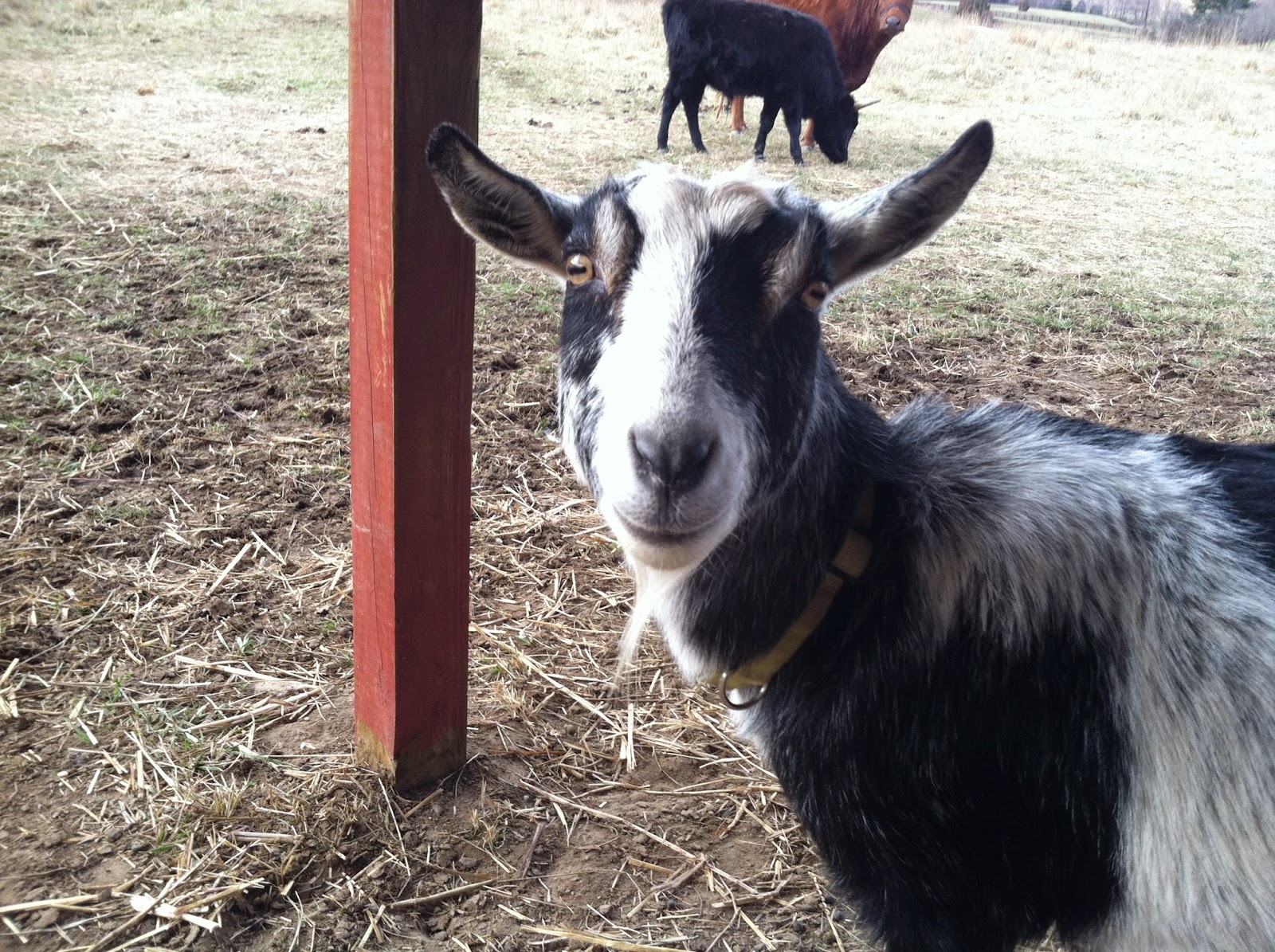 Not only did Dr. Dillon take care of Baxter's ears, she made many suggestions for treating his allergies using natural remedies and traditional medicines. She also asked about my other animals and answered my questions about my pigs' small litters etc.  She was in no hurry to move me along and when I went out to pay my bill of just $85.00 she brought her 10 year old daughter out to meet me.

Most of us who raise livestock do our own vaccines, diagnose and treat when we can.  You can't own 20+ animals and call a vet out every time one of them coughs or behaves strangely.   Again, I'm lucky my vets will spend time on the phone with me walking me through this or that.  They've taught me to draw blood in goats and donkeys so I don't have to call them when I need that done.  Last year when Lily had a prolapsed uterus the doctor explained to James every step of the way as he cleaned her up and put her back together.  I could go on and on how many times vets have gone the extra mile for me and my animals, sometimes free of charge.  Maybe the reason they're like this is because many of them have livestock of their own.

Hearing sad stories makes me thankful for my animals' current good health, for my vets and thankful for this group of friends I've made through the internet. Some I've met, some I barely know and some I feel like I know because we've been talking for years on this goat group.  Because of everyones' shared experiences we've all learned so much.

We may think dogs and goats are very different; one a pet and one a producer of food.  When you watch this video you'll see how the two can bond, form a relationship and may have more similarities than we might think.  Cato and Keri are great buddies.  They take turns initiating play and are always gentle with each other.  I'd love to know what they think of each other.  It's my job as their caretaker to give them both the best care I can.