When the sun comes out

The sun came out this afternoon and it was 50 degrees.  I went out to give the animals some hay but first decided to spend some time with the donkeys.  I gave them some treats and Chy was probably the most affectionate I've ever seen her.  She stood and let me scratch her for a long time and when I'd stop she'd nuzzle me or chew the buttons on my jacket.  I decided it might be time to try the lead on her again.  She didn't pull away when I clipped it on her halter.  Of course I had treats in my hand but that doesn't usually matter.  She wasn't all that excited about it but she didn't try to run away either.  We didn't really go anywhere but I wanted her to see there was nothing to be afraid of.  After I removed it (which she also patiently allowed) I gave her more treats.  This was a huge step for us.  I wonder if she'll let me do it again tomorrow.

Next I filled the duck's water bowl.  They've been holed up inside their pen every day, all day, since Gilligan was attacked.  The only time they come out during the daylight is when I fill their bowl and stand there with them.  They come out again at nighttime which isn't very smart, so I chase them back inside and lock them up.  Since the hoses had thawed I turned one on and the instant they heard it they came running out of their house.  I filled their bowl then let the hose run.  They love a running hose.  Their canoe has been frozen solid all winter so they've had no water to splash in for a few months. 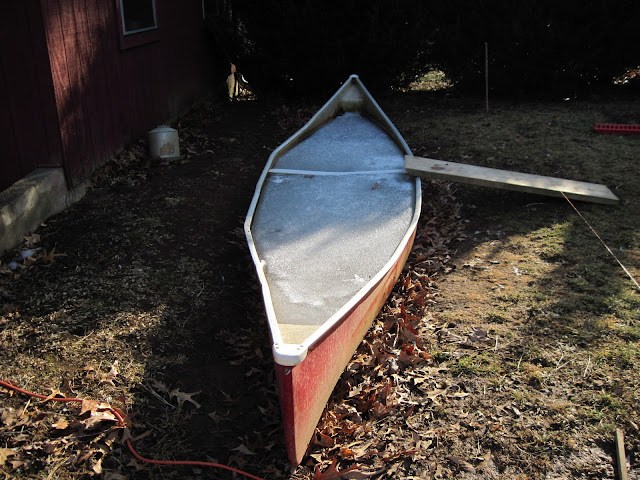 I hated to turn the hose off, they were having so much fun.


Next one of my Scrabble friends (she's 89 years old) came by with visiting friends of hers.  Because of our animals, our house is often on the driving tour of the neighborhood.  She was hoping some of the goats had babies for them to see.  During good weather people show up here a lot.

62 more days till spring.  Today's little taste of spring was a real treat.
Posted by kpannabecker and jpannabecker at Tuesday, January 18, 2011