A year ago this month my friends and I had our first Julie and Julia dinner after having seen the movie 3 months previous.  Last night we did it again only at a different house.  The dinner was tasty but making it an event is what made it fun.  Preparing a meal with friends is very different than doing it alone.  It's a lot more fun with friends but it takes wayyyyy longer because we get sidetracked so easily by singing at the piano (Rebecca!!!), our titillating conversation and the wine (or grappa or hard cider) is flowing so you can imagine how we get off track.

My part of the meal was the entree, Chevon Bourguignon, which turns out to be a glorified meat and wine stew.  When Julie cooked her boef bourguinon (as I type that I can hear Julia saying it) from Julia Child's, Mastering The Art of French Cooking, she fell asleep and the dish burned.  I remember how she made such a big deal about this dish and that it took a long time to prepare.  It most certainly did.  I had to make this dish at home instead of at my friend's house because I started it at 9 AM.  I probably could have waited till 11 or so but I didn't know how long it would take.  So many of the things seemed pointless and I wish I could have asked Julia Child why it mattered if I did it.  The first thing you do is simmer thick sliced bacon in water for something like 10 minutes.  Then you remove it from the water, dry it and then place it in olive oil and cook it on the stove till lightly browned.  Any chef reading this, could you tell me why I would first simmer it then put it in olive oil? 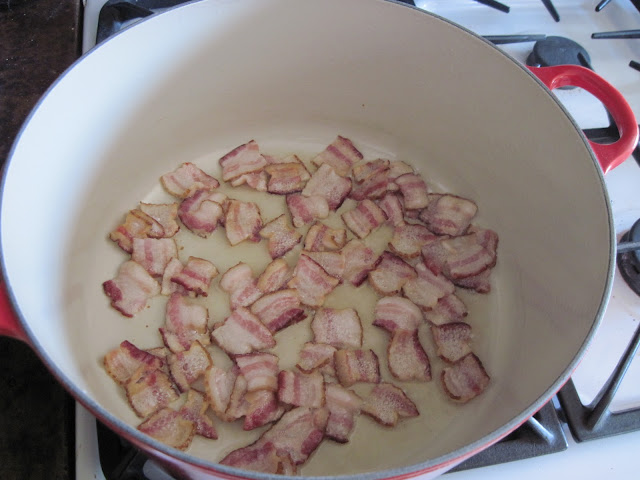 Next I browned the goat meat (chevon) in the fat and oil and then later added a bunch of other things, including 1 1/2 bottles of chianti.  I won't tell you the whole recipe but here's a link to the one I used, replacing the beef with goat. http://www.food.com/recipe/boeuf-bourguignon-a-la-julia-child-148007  I almost doubled it.  I also used onions from our garden instead of pearl onions since I couldn't find them at our local Kroger.  I increased the garlic too because it only called for 2 cloves.  Who uses only 2 cloves of garlic in any dish?  I guess Julia Child.

The next question I'd like to ask Julia is why I would cook a carrot and an onion with the stew for 3 or 4 hours and then discard them when removing it from the oven?  I left them in there.  I didn't get it. 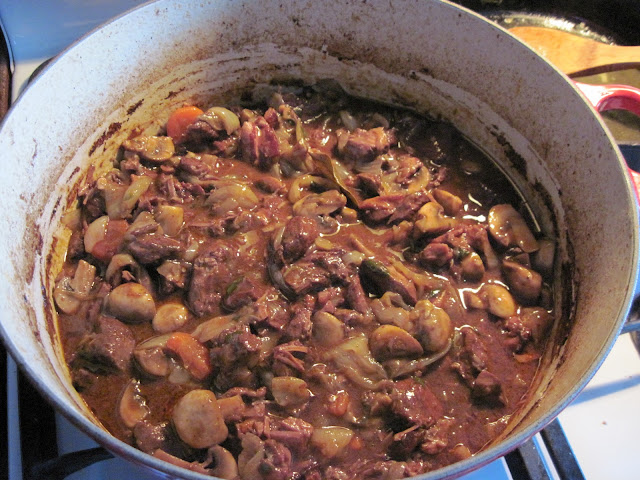 I also made homemade pasta.  Again, I'm not sure it's worth the extra effort except I know James likes it (therefore it's worth it).  I'm not sure other people care if their pasta is homemade or from a bag but I did it anyway since it was a special occasion.  I made way more than I needed.  I hadn't made it in so long I didn't know how much one recipe made. 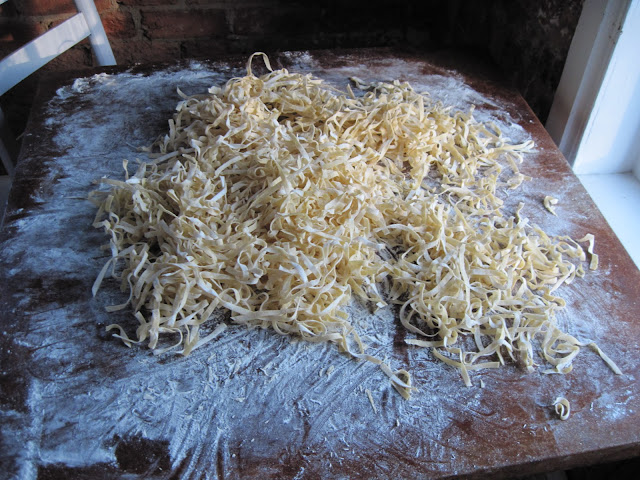 The stew was served with hummus and pita as an appetizer, which you can see James dipping into.  Lee, on the left, is licking the chocolate from the bowl from the dessert being made. 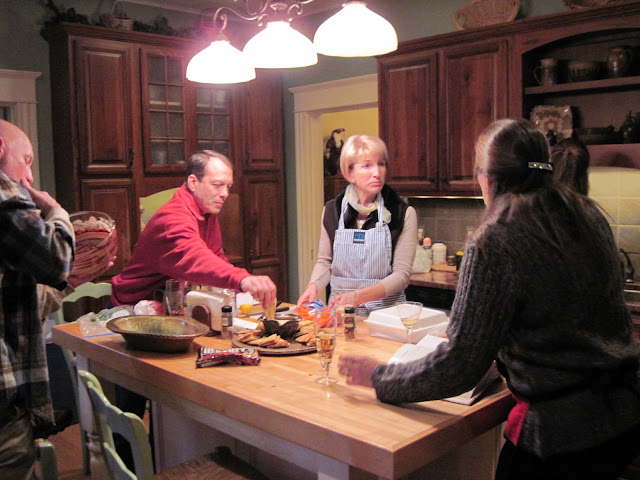 Stuffed onions were also on the menu.  I don't know the real name because I didn't look at the cookbook but they were delicious.  I didn't get a good picture of them stuffed and cooked. 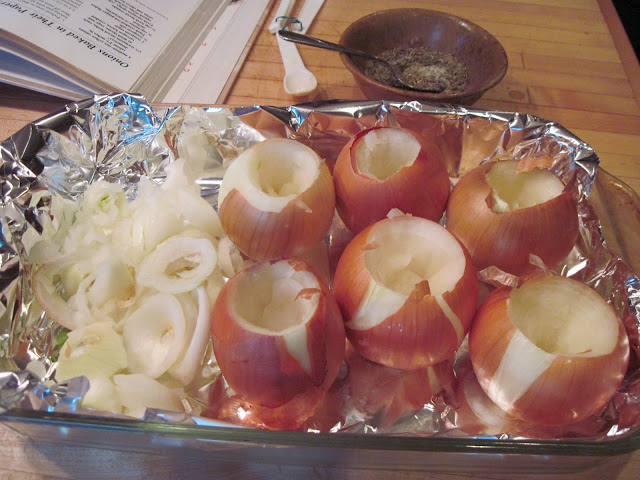 One thing I'll make another time is the thin sliced zucchini.  It was shaved with a carrot/potato peeler and then served steamed with a dressing.  Some complained it wasn't hot enough when we served it but I liked the idea. 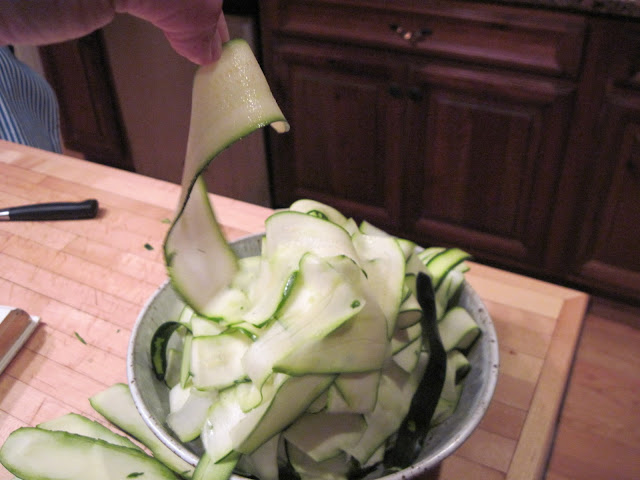 Here are my friends, Rebecca and Laura.  True to Julia, we all wore our pearls. 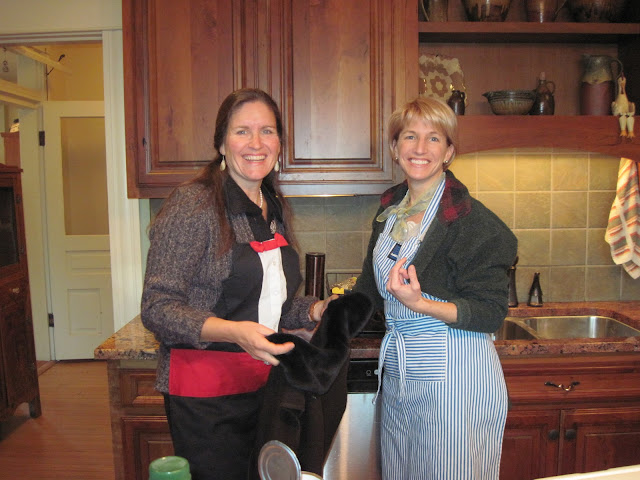 Their daughters, Leila and Addie, made an awesome dessert, chocolate, date and almond torte, of which I had 2 pieces. 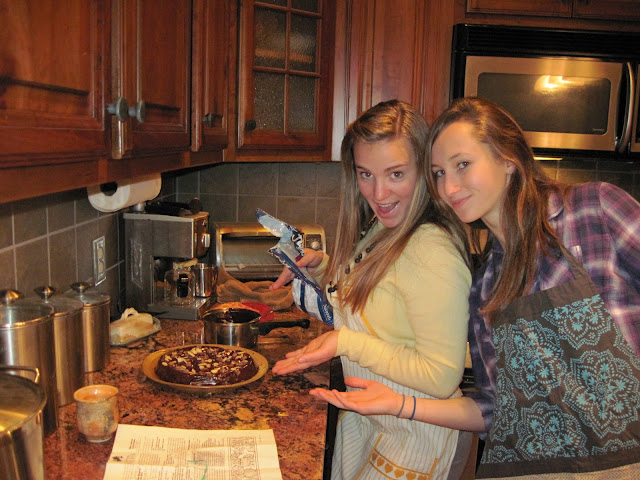 Finally stuffed, we finished the evening playing The Newlywed Game.  The teenagers were our judges and read the questions, there were 8.  I was pretty proud of me and James for getting half of them right but we came in second.  Our hosts, Rebecca and Lee, won.  They were kind enough to have consolation gifts for us.

I can't believe we waited a whole year to do this again.  If we don't do it before, I need to write it on my calendar for next January, The 3rd Annual Julie and Julia dinner.

Tonight we're having leftovers for dinner.
Posted by kpannabecker and jpannabecker at Sunday, January 30, 2011