would you, could you, with a goat in a boat 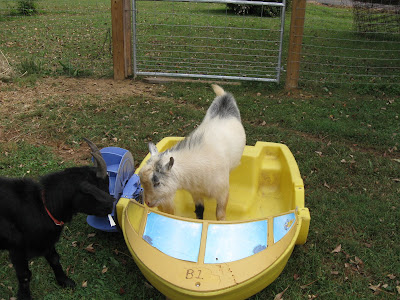 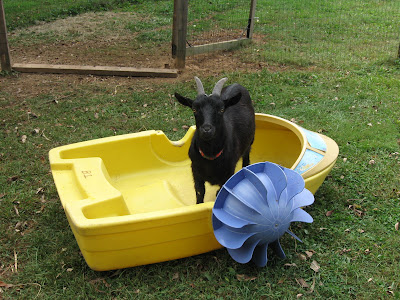 I always loved Dr. Seuss' Green Eggs and Ham. I don't think it mentioned goats in boats though. The goats got a new toy today, a broken paddle boat, and it was a hit. I wish I could have gotten them on video when I first gave it to them. Witty and Jake hopped in it and started wrestling right away. Jake laid down in it for a while but I disturbed him when I got the camera out. Adam brought home these paddle boats for us to play around on the river in but this one was missing one paddle so I decided it would be perfect for the goats.

I decided to redecorate the barn today. Every morning the milking stand is covered in poop so today I moved it into one of the stalls along with a little printer cart where I can store milking supplies. Now I can close up the stall so no one gets on it until they're meant to. Since I took away their favorite bench I moved an old computer desk there and put a non-slip mat on it so now they have another thing to jump up on. I took the top off the computer desk (the part with the cabinet) and put it in the feeding stall to store some food supplies and provide a shelf for me to work at. It's all quite functional now.