Pickin' up paw paws and put 'em in a basket 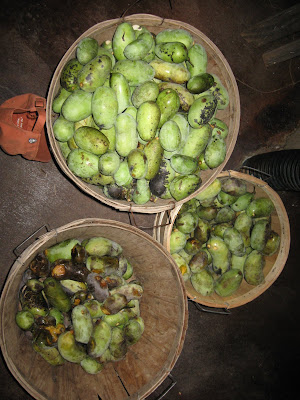 Way down yonder in the paw paw patch. Remember that song? I never really thought about paw paws being a real fruit until we moved to VA and had a paw paw tree in our yard. We never did anything with them though. I'm sure I didn't consider eating them. They're an interesting fruit, though not a beautiful one. Most of the ripe ones looked bruised or spotted as if a worm left its mark. Yesterday some friends of ours came over and the 4 of us went paw paw pickin'. We filled several grocery store bags. I'm not quite sure what all we'll do with them but, hey, they're free and you can eat them so why not pick them. I think all of us ate at least one while we were picking. After one bite I thought, wow, this is really good. After I had finished the whole fruit I'd had enough. They're very filling and have a pretty strong flavor, kind of like a cross between a mango and a banana with the texture of an avacado. After we drug James away from the free fruit we came home and made a pawpaw custard pie using our own eggs and goat milk. The pie baked up nicely and was very pretty but maybe we should have used less fruit and more of the other ingredients. It wasn't bad but no one went back for seconds. The flavor was just a little too strong. Maybe if we hadn't just eaten one and smelled them for so long.

I doubt we'll be eating too many of them like an apple but I'll probably make some pawpaw bread or cookies and since we have so many I plan to make some wine from them too. Yesterday James spotted a persimmon tree in a neighbor's yard. I better start looking for persimmon recipes next.
Posted by kpannabecker and jpannabecker at Monday, September 21, 2009