I had never heard of puffball mushrooms until yesterday.  James went to some friends of ours to get a truckload of manure for our garden and came home with a gift of two giant mushrooms. 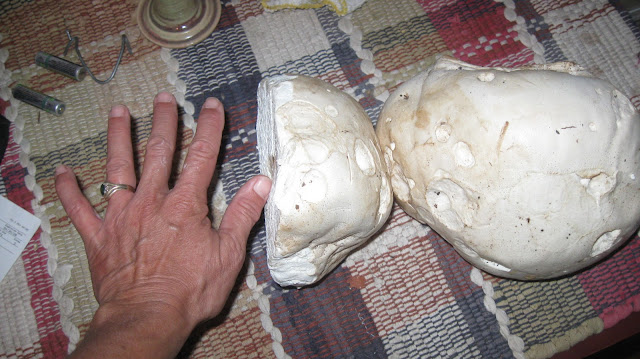 I was a little hesitant about eating them but I trusted our friends Bob and Gerri didn't want to kill us so we peeled them and cooked them up in a quiche.  I did Google them first so I knew there was such a thing as an edible puffball mushroom.  I bet we used less than half of one mushroom and it made 2 cups.  I sauteed them first with some olive oil, spinach and onion and tasted them before putting them in the egg pie.  Wow, they were really tasty.  They felt so light and airy when they were raw and then after being cooked they were the texture of marshmallows.  We're hoping to save the spores and spread them around here so maybe we can grow our own puffballs.  I love this new (to me) culinary discovery.  Every spring we go hunting for morel mushrooms, which is fun, but I think I like the taste of these more, or at least, I like that you get so much, so easily and it's just as delicious.
Posted by kpannabecker and jpannabecker at Sunday, October 17, 2010