Today one of the ducks named itself

My sister, Debbie, and I were sitting in the lawn near the ducks and Debbie kept commenting on how red the inside of one of the duck's mouth was.  Later she saw something hanging out of the mouth, a hook with a swivel on it.  That explained why he kept shaking his head.  Ducks like shiny things and I've found a few things they've brought back to their pen, a parrot toy, a yellow plastic lighter, stuff like that.  I guess it found the hook and swivel attractive too.

We got the ducks in their fence and cornered it till we caught the pitiful guy with the pierced tongue. 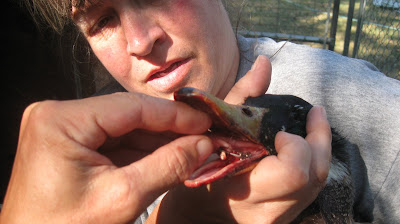 It took a good while but eventually I was able to cut the hook with some wire cutters to get most of it out.  The barb is still inside the tongue.  It didn't come out the other side so there was no way to pull it through.  He seemed much more comfortable and was eating and drinking this afternoon so I'm hoping he feels a lot better.

His new name?  Captain Hook, or Hook, for short.  We've also considered the name Pearce (or Pierce).
Posted by kpannabecker and jpannabecker at Tuesday, September 21, 2010