Take me to the river. Dip me in the water.

Remember that song by the Talking Heads?  The words of the song really have nothing to do with what I'm going to blog about but it had river in the title so I thought I'd use it as a heading.

This afternoon James and I sat out on the front porch to have lunch and I said, "I love this place".  He said he did too.  We made plans to rendezvous down by the river later this afternoon.  Ok, that sounds really romantic, doesn't it?  That's why I wrote it.  We did go down to the river with some chairs, magazines and the dogs.  Since it's a holiday weekend there were lots of canoeists and kayakers passing by.  We only stayed through one browsing of The Architectural Digest and it got pretty cool so we headed back home.  I love looking at the pictures in Architectural Digest and sometimes I think, gee, I'd like to live there, but really, I can't imagine it making me any happier than here.

Yesterday 2 friends and I went down to the river to hang out.  The weather was beautiful and the conversation?   Well, we were 3 middle aged women drinking wine, eating avocado, almonds and carrot cake.  Who cares what we were talking about.  The afternoon was perfect.

I don't know why we don't spend more time watching the blue herons, turtles and beavers.   The leaves are starting to fall and float atop the water.  We should be down there more often.  I should make a Labor Day resolution to spend at least 3 days a week on the riverbank.

I hope none of you are laboring on this labor day weekend.   James did just a little bit.  He cut some downed branches with the help of 3 turkeys.  They would bite the chainsaw bar and chain if you gave them the chance. 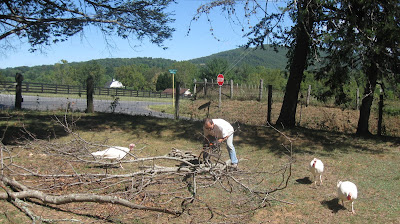