My friend, Gail, lost another duck to a black snake.  I think this was the 3rd one.  I told her we don't see many snakes around here.  She told me she has never had a coyote or hawk problem, just like I had said a few weeks ago.  Gail, watch what you say.

Today I went out to the turkey/donkey barn and Soosie was clucking like she does when she lays an egg.  I went in to get her egg but found, instead, a black snake underneath the nest boxes.  Soosie was not happy about it and refused to leave the barn until the snake was gone.  I hope it was there eating mice and not my eggs.  I'll be sure to look first when reaching my hands into the nests now. 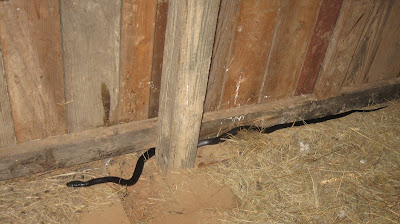 There were no turkeys or guineas in the barn, just me and Soosie.  I wonder what they would have done if they saw it.  Here's a video of Soosie telling it to leave.  I just previewed this post and it cuts off the side of the video where the snake is leaving the barn.  She never pecked it.  She just clucked and paced back and forth.

Don't anyone else tell me what kind of predator they have on their property.  It will probably appear here next.
Posted by kpannabecker and jpannabecker at Thursday, September 02, 2010