We had our first big snow of the winter yesterday.  I measured 14 inches.  I lost sleep the night before, worrying about how I'd get to all the animals the next morning and how the little guys would be able to get around in it.  The chickens didn't.  They stayed in their coop all day yesterday and today.  Well, most of them did.  A few of them are good flyers and I caught sight of them here and there.  The rest took 2 snow days.

The little animals followed in the bigger animals' tracks.  Roxie and Keri make excellent snow plows.  Keri charges through it like it's nothing and Roxie pushes through it steadily.  Her underbelly was really pink and I felt bad about that but what could I do?  She was just as excited about food as ever and didn't act uncomfortable.  The little pigs filed single file everywhere, staying in the tracks, never making their own.

The goats weren't happy about the snow but they were out in it more than I expected.  Mostly they followed in Keri's tracks but I was surprised when they came to see me in the afternoon and Luti led the way being a snow plow herself.  The others followed their leader.  Cato is a tiny thing and stays very close to the others.  He was sopping wet most of the day and I'm sure he was glad when they all curled up together in the shed or trailer. 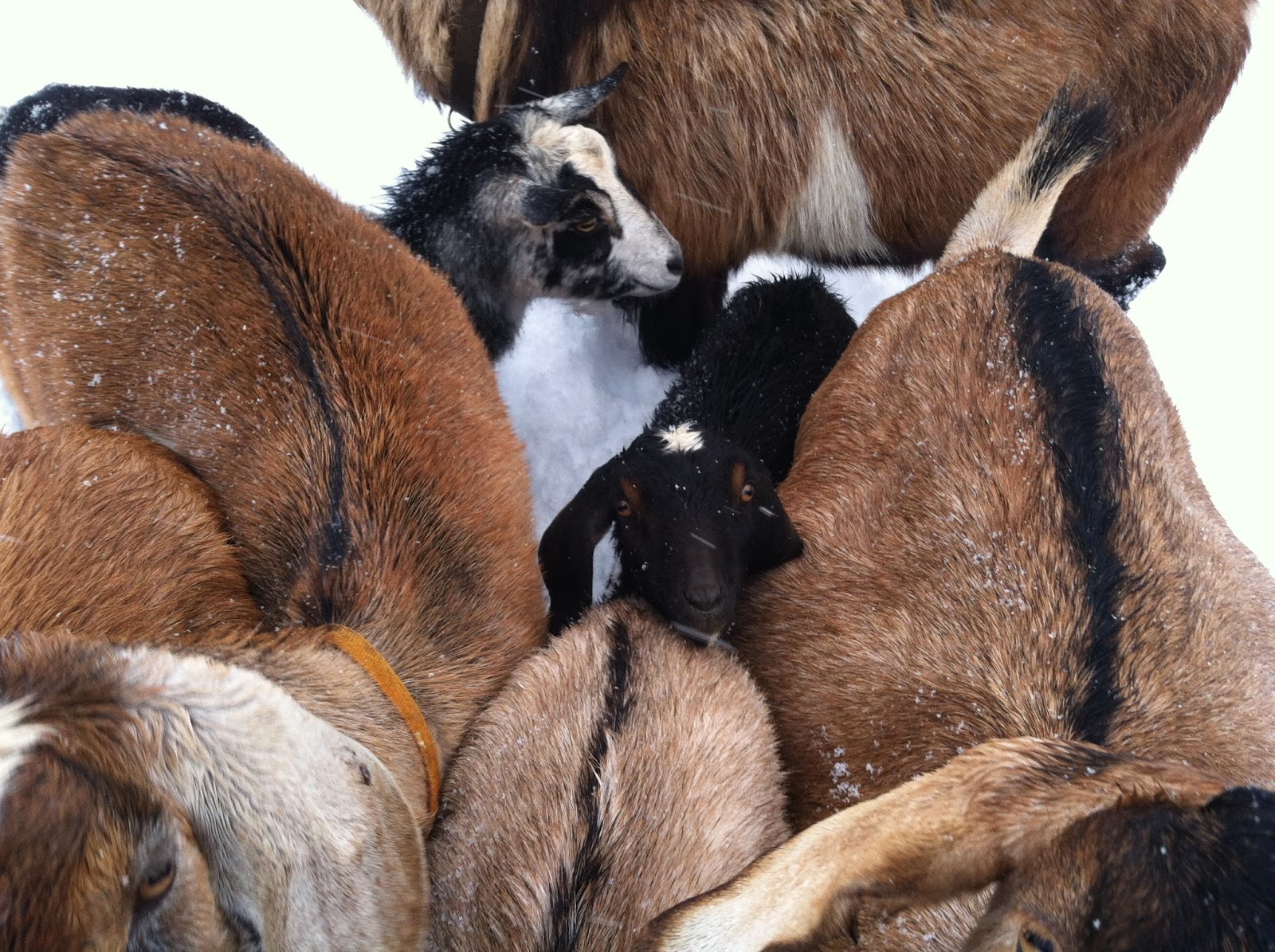 I don't know how I would have managed without our old 4 wheel drive pickup.  It drove right through the snow so I didn't have to walk around the field with my milking stuff and make many trips back and forth with buckets.  Carrying a 5 gallon bucket of water or food is really hard when the snow is that deep because you have to hold the bucket up so it won't drag through the snow.  I honestly don't think I could have walked that far and back a few times.  There are 7 gates we have to go through to get to all the animals.  We shoveled open 5 of them.  The last 2 I just shoved until I got them open enough to squeeze through.

Lex only ventured outside twice yesterday to take care of business.  At night I heard him crying because he fell down and couldn't get his back end up.  I had to lift him and then he was fine and could make it back up the steps.  I feel so sorry for him because I know he'd love to run and play in the snow like Keri and Baxter.  Baxter was afraid of it at first and it was hard to get him to pee in the morning.  By afternoon he discovered he loved it and didn't want to come back inside.  Today we took him for a lap around the field (3/4 of a mile).  It wore me out but I'm not so sure about him.  He loves to burrow in it.

The mountains look beautiful and with the sun shining today put me in a much better mood to view it all.  Our high temperature today was 53 so the snow is melting fast. 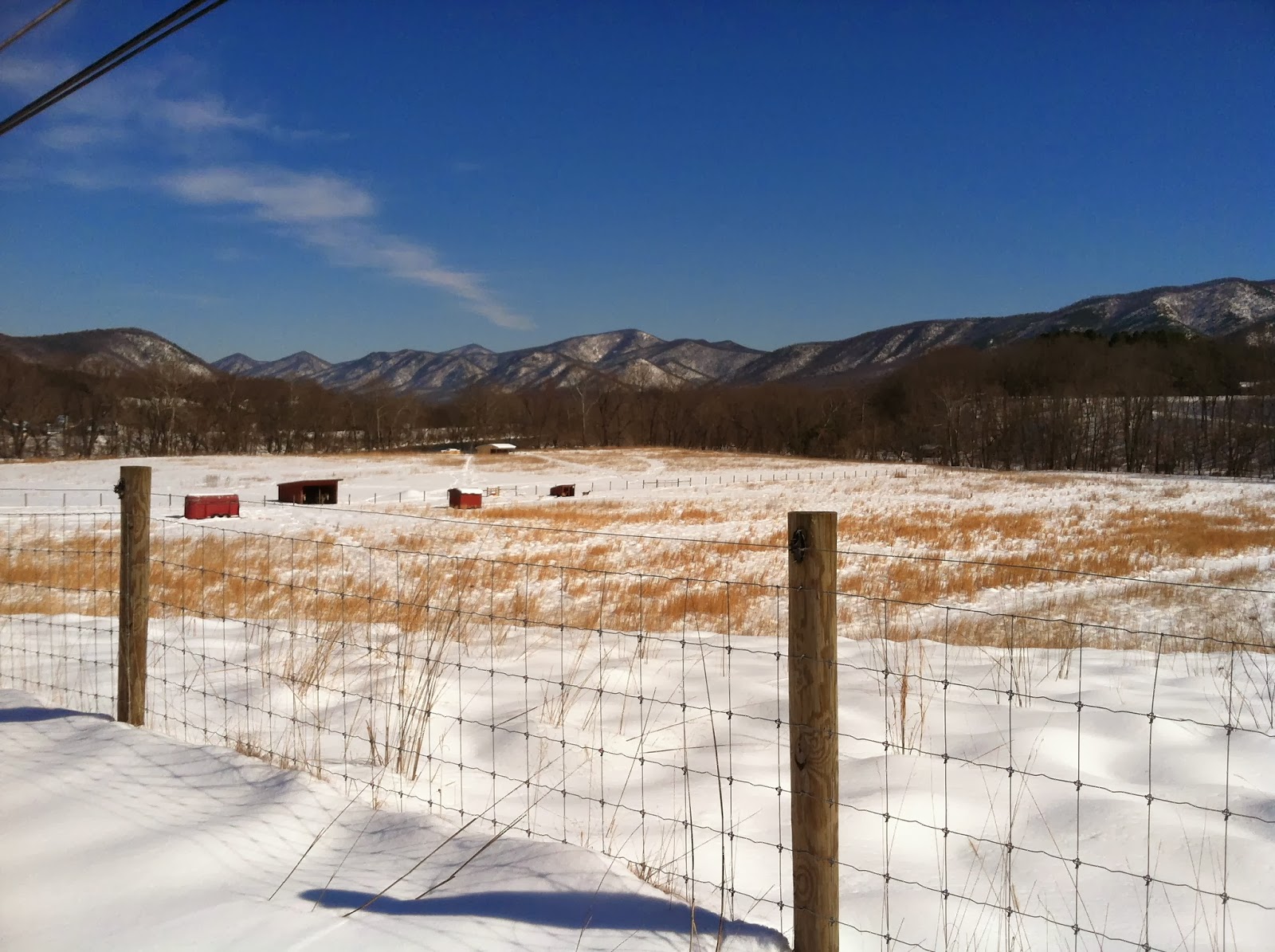 The snow is slipping off all our metal roofs.  This one hit the ground before it broke off. 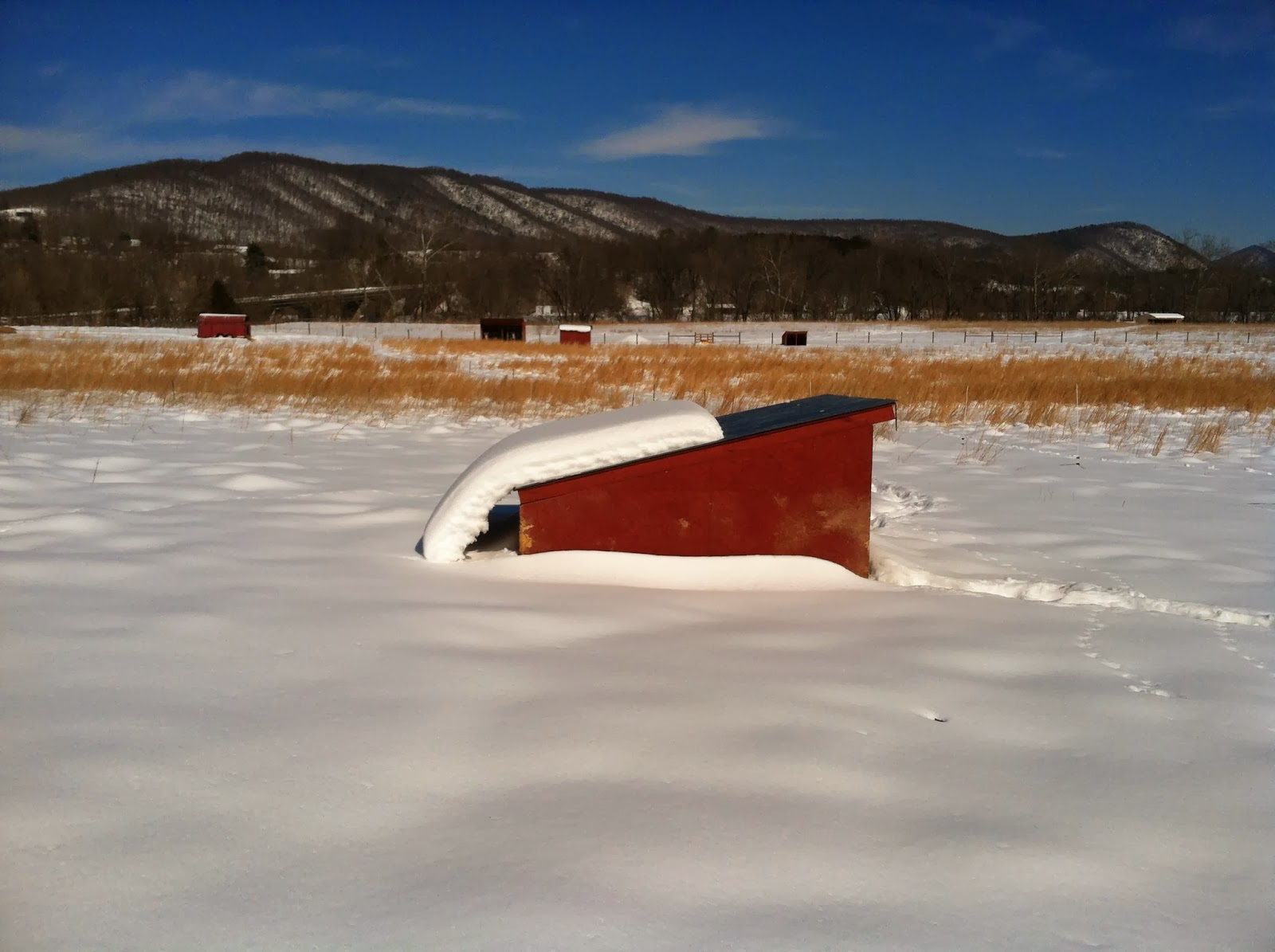 Until all the snow falls off the roof of our house it's kind of dangerous to walk in that danger area.

It was a happy Valentine's Day.  I hope you all enjoyed it too.
Posted by kpannabecker and jpannabecker at Friday, February 14, 2014