New life at the farm

My mom asked the other day if there was any new life on the farm.  That morning was the first morning I had checked to see if I could feel babies moving in my goats.  Sure enough, I felt kicking in Pessa, Respa and Luti.  Respa is pretty thin so I was wondering if she was really pregnant.  I can't imagine she could have more than one baby in there.   Most of the others are pretty round or at least filled out more.  I think Respa just has a fast metabolism.  Every morning she joins the pigs to eat their food instead of eating with the goats.  She acts like she's starving.  Ok, goats always act like they're starving.  I love this picture of Respa and Roxie sharing breakfast. 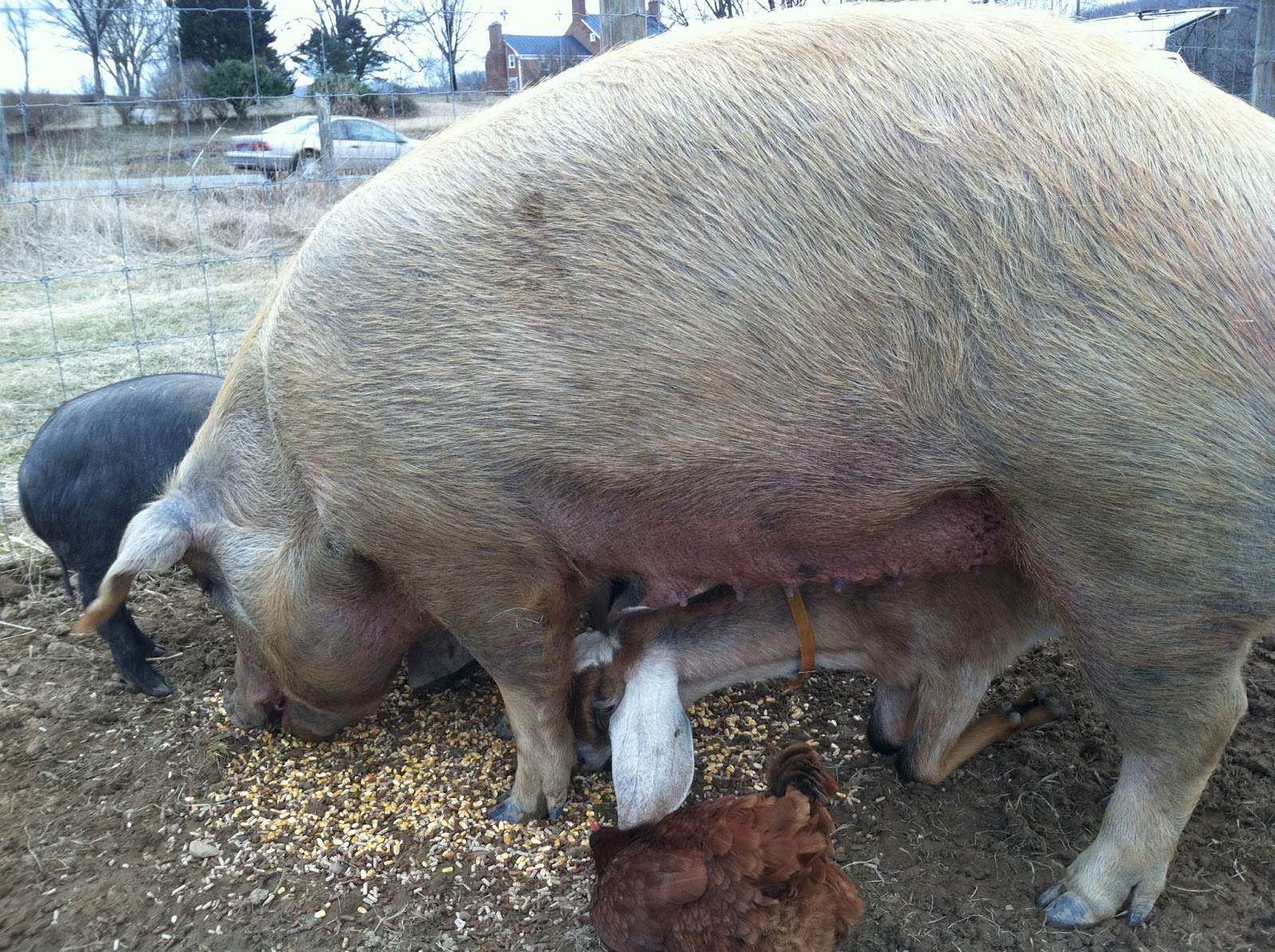 The first goat kids aren't due until mid March.  Hopefully it will warm up by then.

As of yesterday we have a new addition to the farm.  As my sister pointed out, this is the first animal in a long time that didn't need a new barn.  Meet Lex's little brother, Baxter.  Baxter, smile for the camera. 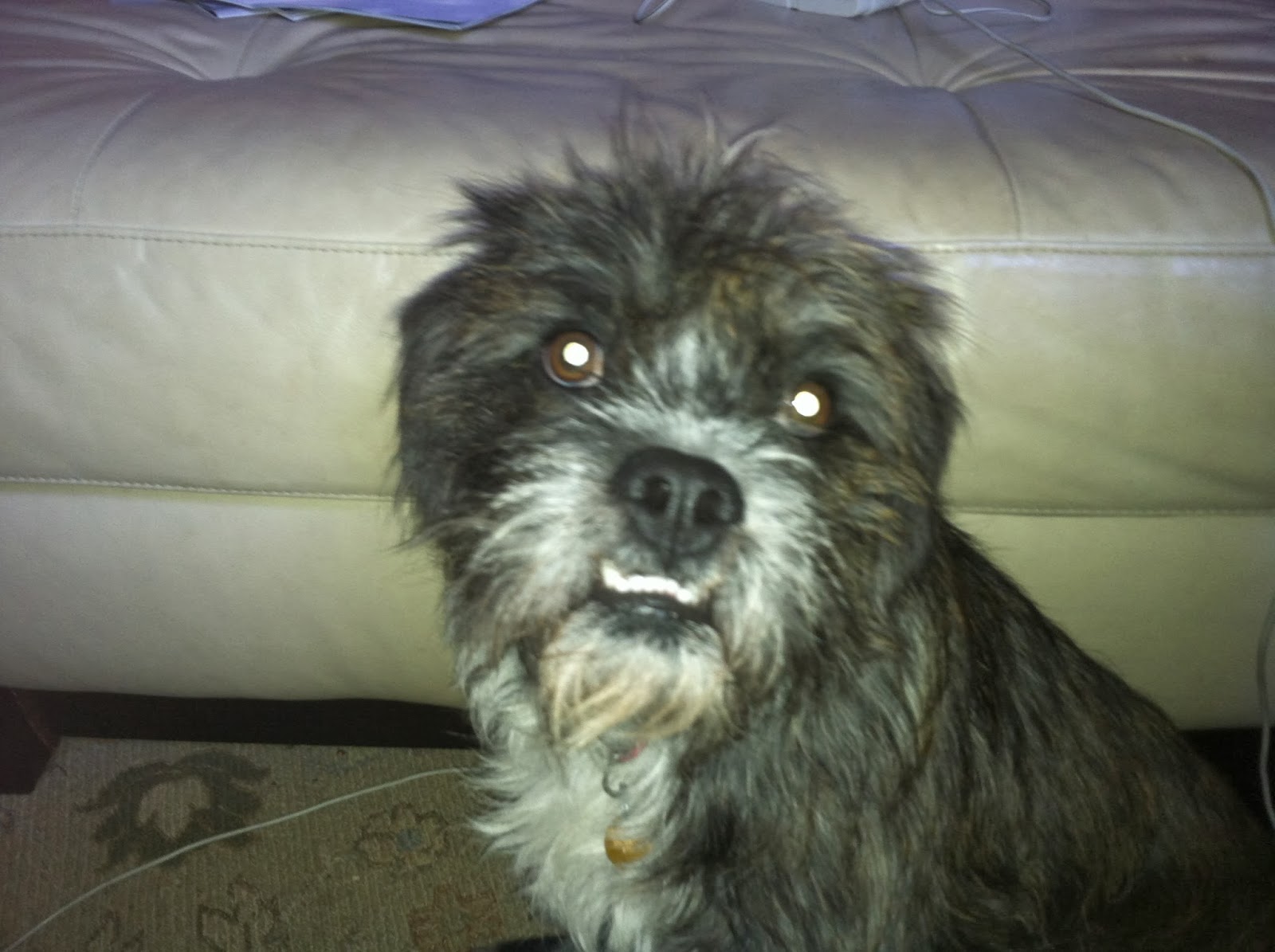 I love  his underbite, don't you?  He's a happy little guy whose tail only stops wagging when he's sleeping.  I got him yesterday from our local SPCA.  He'd been there since December and I can't believe no one adopted him sooner.   I was told he was a stray and they knew nothing about him.  He's approximately 3 years old, housebroken, walks great on a leash, isn't anxious, has a beautiful coat and teeth and a wonderful disposition.  He was recently neutered and I hope eventually he'll stop humping Lex.   That's the only fault I can find with him so far.  He absolutely adores Lex.  He follows him everywhere and wants him to play.  I haven't figured out what Lex thinks of him yet but sometimes  he probably views him like this. 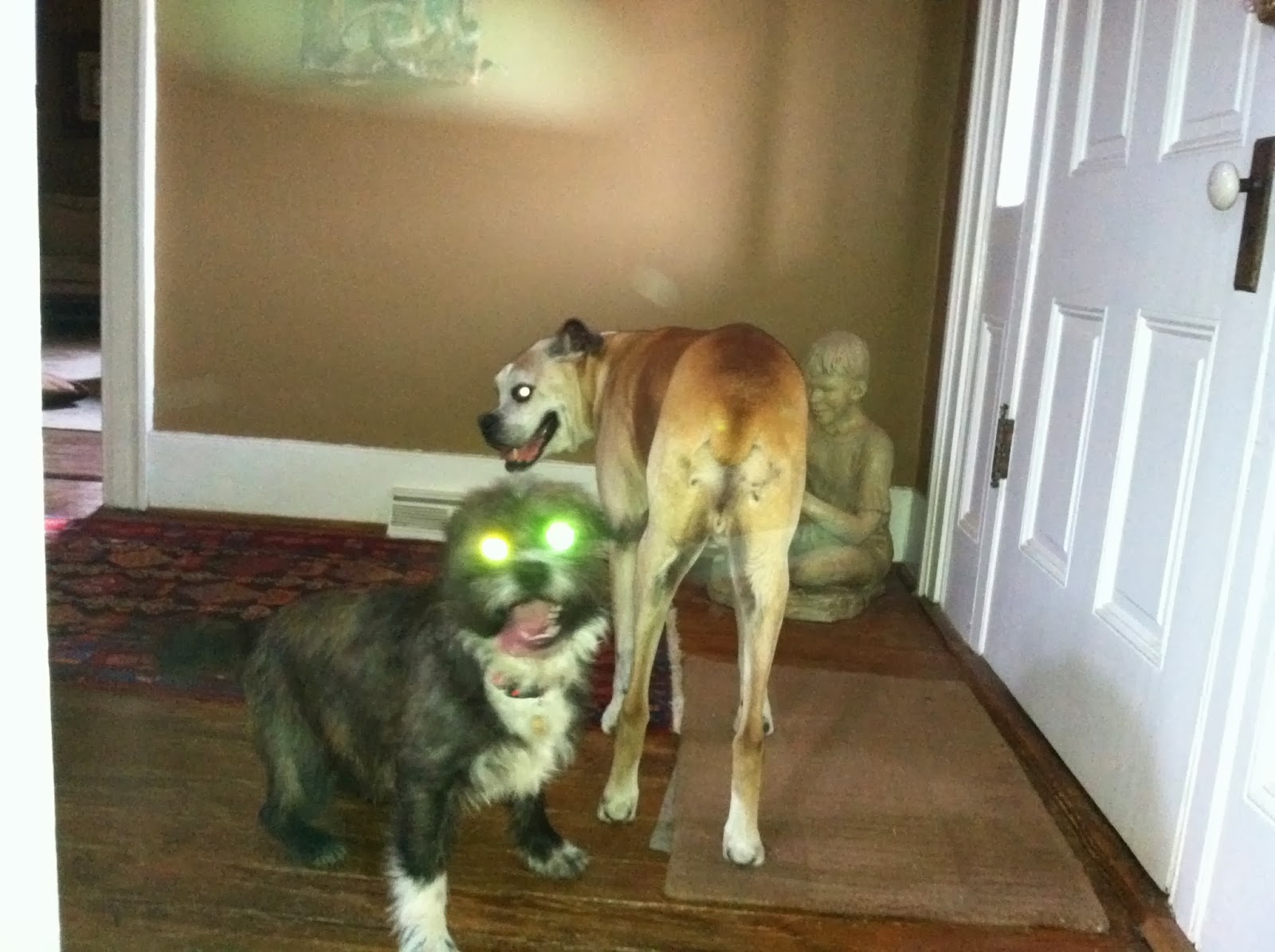 One thing Lex does like about him is he bathes Lex.  He will never have dirty ears again.  He even licks Lex's sore back legs. 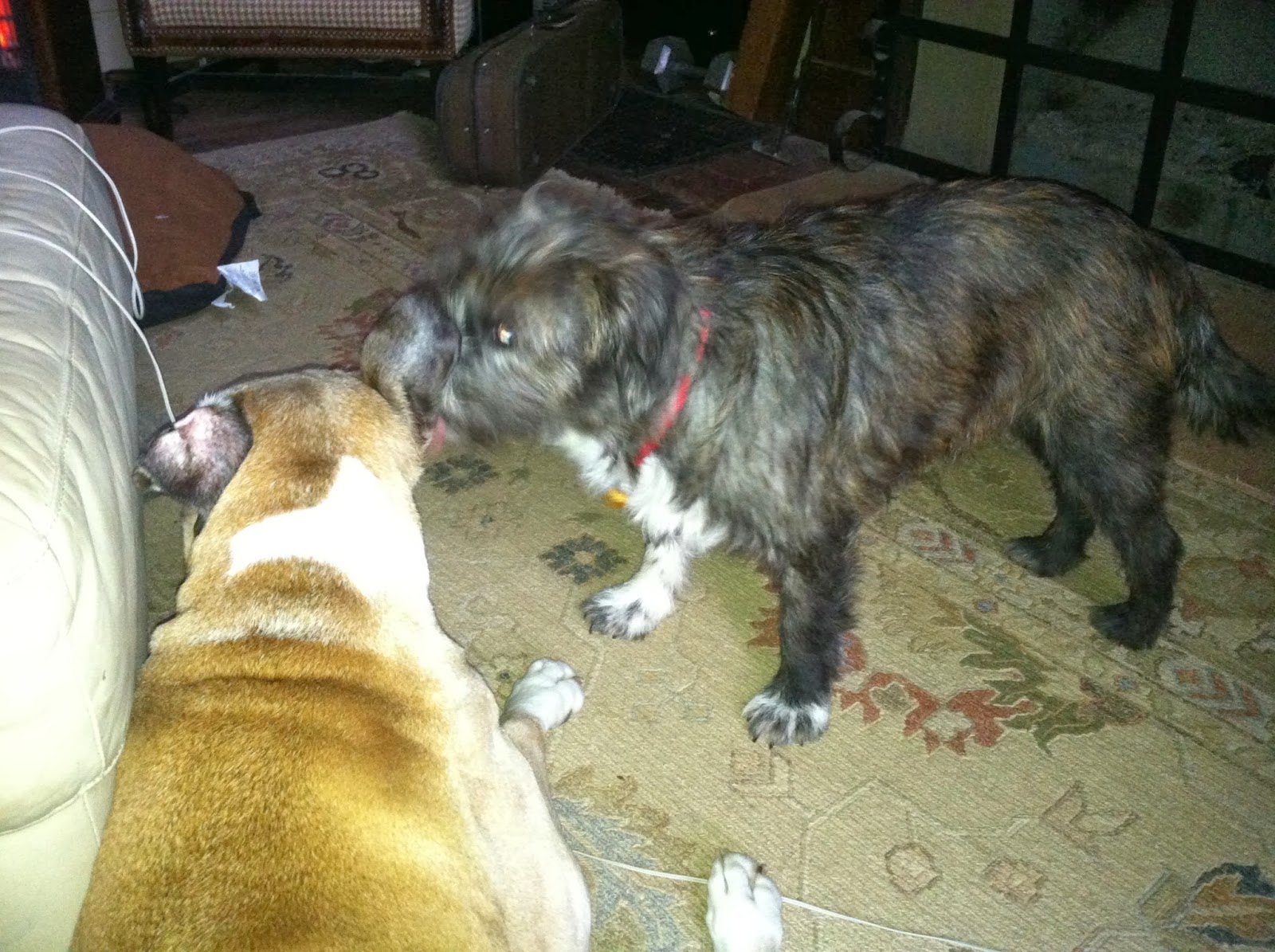 He's a terrier mix of some kind.  He looks to have Cairn Terrier maybe?  Whatever he is, he's cute and I just love him.  Lex will be 13 in April and I'm hoping he'll be a good trainer for Baxter. 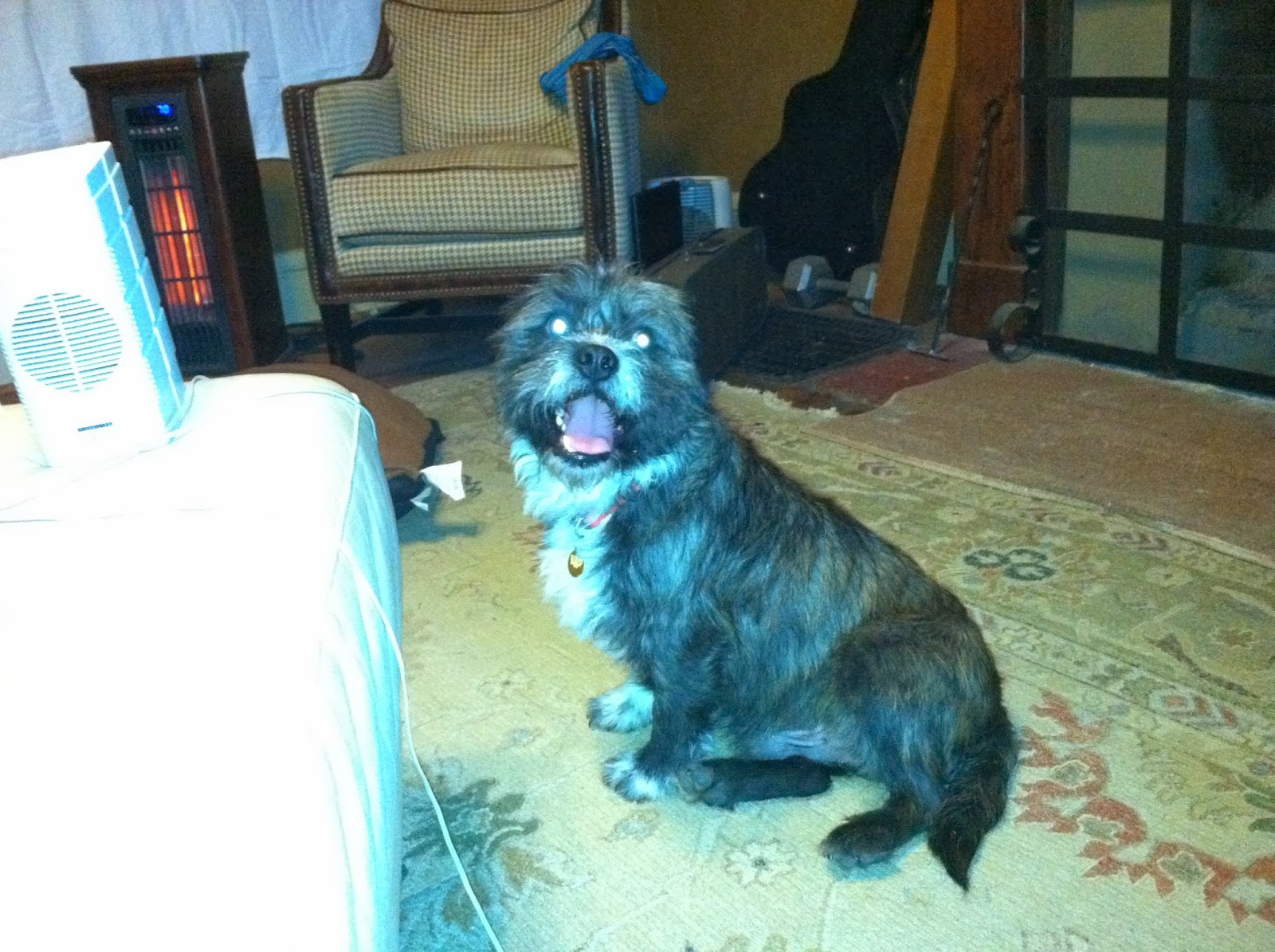