The turkeys are growing up fast.  Yesterday I decided to give them their first taste of freedom.  I opened the door of their barn to the pasture.  It didn't take them long to figure out this was a pretty great place to be.  They walked right out and began pecking at the grass and looking around.  There were some chickens nearby who didn't know what to make of them.  They stood and stared.  I think they were more interested in the turkeys than the turkeys were in them.   They definitely look like turkeys now instead of chickens. 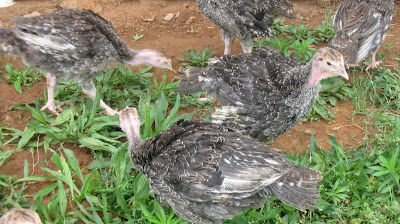 It looks like several of them are Toms because I've seen many fan their tails out in display.   I've also heard them gobble.  I recently learned that Toms gobble and the hens just chirp.  There's so much for me to learn. 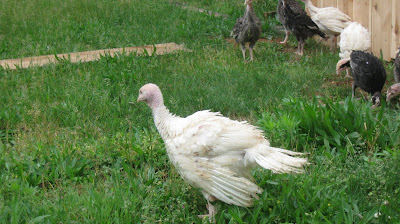 This white turkey is a Tom.  See how he has dropped his wings and fanned his tail?  Sometimes they hold the tail up and look like they're really showing off.  They've been outside most of today.  I let them eat then took their food away so the goats don't get in their barn and eat it.  The goats did go into the barn and they found an unopened very heavy plastic bag of food and somehow opened it.  I don't think they got much and no one
seems sick yet.  I had heard loud chirping so I went to check it out.  That's when I found the goats in there.  I also found that some turkeys had squeezed out of the fence and were roaming where they don't belong.  I put them back in the fence and they escaped once more.  They put themselves to bed last night just like the chickens do.  I hope they do it again tonight now that they're exploring farther and farther from their barn. I was hoping they'd gobble in this video but they didn't. 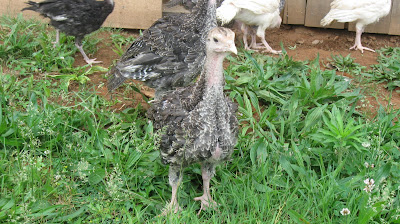 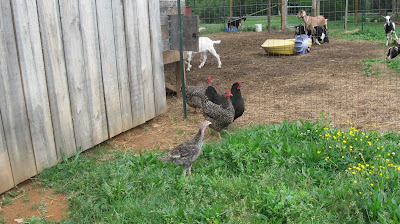 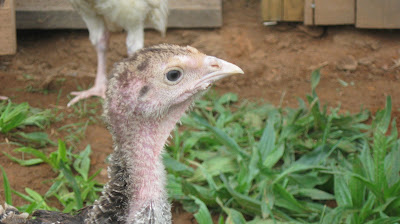