The ducks have decided they no longer want to sleep in their pen at night.  Now that they've had a taste of the big yard they want no parts of being in their small pen.  They disappear for hours sometimes and I have no idea where they are.  It used to be that I would go out to their pen every morning, feed them and gather their eggs from their nests and then let them out to roam the property.  Most days I would get two eggs so our dogs each got one to eat.  If the dogs want an egg now they're going to have to search for them themselves.  I had hoped the ducks would at least go back to their pen in the morning to lay their eggs.  Nope.  Yesterday I wandered around the yard a while but never found any.  Today I opened the back door and here's what I saw.  You may have to click on the picture to enlarge it and find the egg. 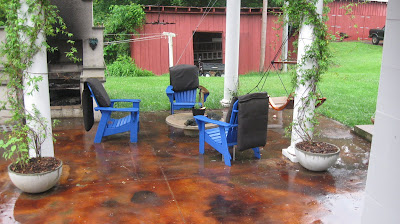 I can't figure ducks out.  When they lay an egg in their nest they bury it and you have to dig down to find it.  Other times they'll just drop an egg wherever they please, right out in the open.  One of the dogs found this egg.  I don't know who but it was gone when I was done milking.  I wonder if they'll find yesterday's eggs.
Posted by kpannabecker and jpannabecker at Tuesday, May 25, 2010