Three sides of the turkey barn are done now (or almost done anyway).  I was determined to build the sliding barn door today and hang it.  With the help of James and Adam we were able to lift and hang it by 7:30 this evening.  It's so heavy.  I need to make a few adjustments so we'll have to take it down again but it slides nicely and I'm pretty pleased with it. 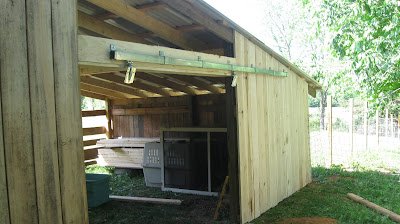 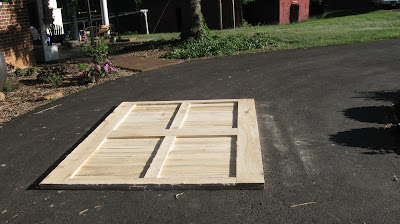 I put the door together on the driveway, the only place I could find that was kind of flat. 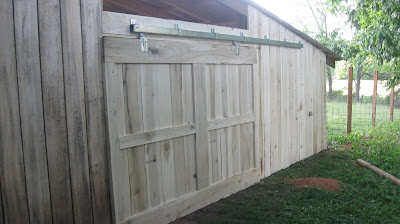 I was going to have it slide towards the goat side of the barn but that was going to require some shims here and there so I now have it sliding towards the back.  I had to lower the doorway so the track wouldn't hit the roof where it gets low.  Only people who are 5' 8" or shorter can walk under it without ducking their heads.  It's a 12 foot track but I had an 8 foot opening.  They didn't sell 16 foot long tracks.  I wanted it to open more than 4 feet so I moved the track to the right about a foot and put the fastener with the rollers in about 18 inches on the door so now it opens 6 feet.  I will put chicken wire over the space above the door for ventilation and light.

Last night we put the turkeys in a small area of the barn closed off by screen doors which I screwed together.    We put a heat lamp in there with them since it was going to get down to 60 degrees last night.  James got up at 2:15 AM to check on them.  At 4:00 he told me they were ok so I could stop worrying about them.  Tonight I put another heat lamp in there because it's supposed to be in the low 50's.  they aren't fully feathered yet so need at least 65 to 70 degrees. 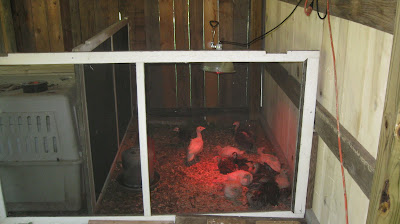 While I was working I heard this banging noise coming from the goat yard.  Shasta, one of the 2 month old bucklings, was stuck in a cat carrier I had put out for the chickens to lay eggs in since the 2 broody hens are hogging the nests they like best.  It took me a while to get him out.  I don't think he could have escaped by himself.  Poor little guy was freaking out.  He had to freak out a little longer while I took his picture.  I wish I could have videoed me wrestling him out of there.  It wasn't easy.  There was an egg in there with him but it was cracked by the time he got out. 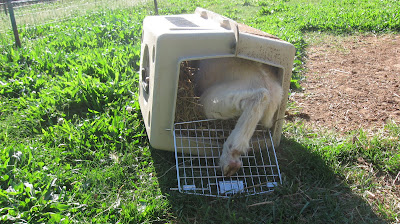