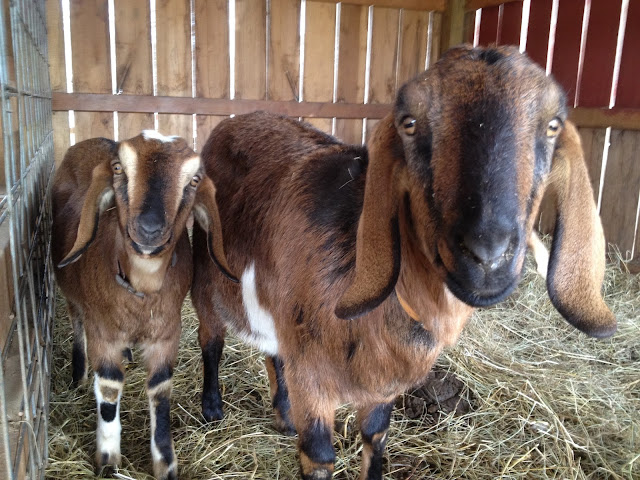 This is Pessa's family - her daughter Mrs. Butterworth and her granddaughter Macy.  They're not nearly as chubby as Pessa.  Mrs. Butterworth was a big baby, hence the name.  These two are both sweeties.  You can probably tell that from their faces.  Come to think of it, all my goats are sweeties.  They're a little more affectionate than their mom/grandmom.  Hopefully they're both pregnant.  This will be Macy's first kidding and Mrs. Butterworth's second.  Macy was an only child.  Unlike my queen doe, Luti, who discards her kids once she has new ones a year later, Pessa doted on Macy and seems to recognize who is her family.  I imagine when Macy's kid jumps on Pessa's back she will be a wonderful great grandmother and allow them to abuse her too.

Back in 2011 I posted a blog with videos of babies using Pessa as a trampoline.  It shows you what a patient girl Pessa is.  Last year I think she only let Macy jump on her though.  No other kids were allowed.  http://holesinmyjeans-kpannabecker.blogspot.com/2011/03/patient-pessa.html

Even though I'm glad kidding doesn't begin here until March, I'm loving seeing pictures of my friends' goat babies being born and getting excited.