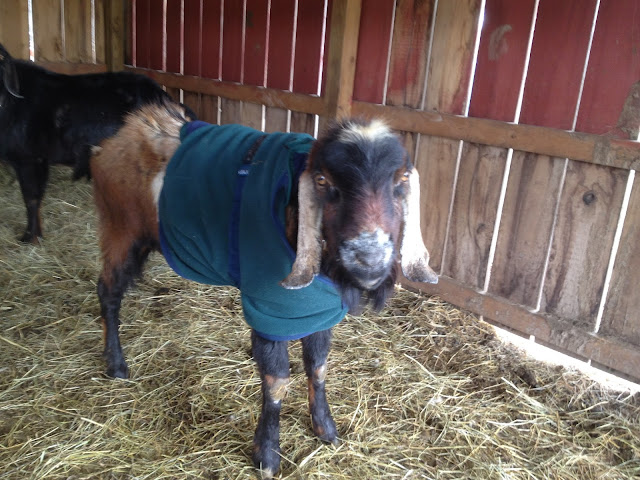 This is Cooper.  Cooper is cold.  See Cooper shiver.

I made Cooper a sweater out of 2 dog sweaters.  He seemed happy to be the best dressed goat in the barn.  Unlike Fat Pessa, Cooper is skin and bones and I can't put meat on him no matter what I do.  He's 8 years old and probably the sweetest (not sweetest smelling) buck you could ask for.  He had his moments when he was young that I could have wrung his neck but now that he's an old man he couldn't be gentler or more in need of cuddles and loving. 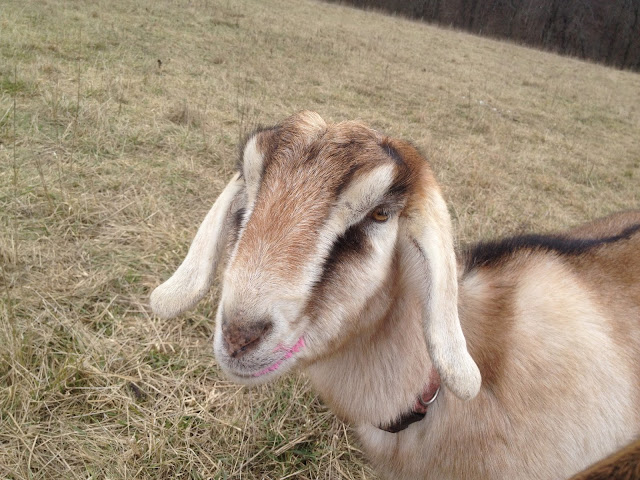 This is Lily.  Lily is pretty.  Lily wears lipstick.

Not really.  Lily just had a dose of Pepto Bismol because she has diarrhea.  She doesn't appear to be wormy and she acts normal. Her eyelids are nice and pink.  Hopefully she just has an upset stomach and tomorrow she'll be back to normal.  I also put some baking soda in their shelter in case she wants it.  Baking soda calms their tummies.  Lily has always been a gentle goat and never been a bully to others.  She's also my top milker now that her mom, Luti, is getting up in years.

I just returned from checking on the animals (1 hour after putting Cooper's sweater on) and found the sweater in the middle of the pasture.  I think his buck buddy, Cato, removed it.  I can't imagine how he got it off him.  Poor Cooper.  Hopefully the girls will snuggle with him in the barn tonight.  It's going to be a cold week.