My first goat was a saanen wether (neutered male).  I was 20 when he came into my life and I had no idea this funny goat would have such an influence on my life even though he was mine for such a short time. 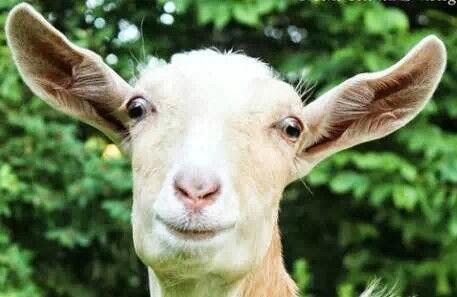 Today I received and email from a cyber friend in my Mid-Atlantic Minis Yahoo group and I just had to share it with you.


I had mentioned a few weeks ago, that I was approached to put one of my does in a movie. Well, I am excited to tell everyone what happened. We shot the movie in NYC and Queens this weekend. My doe Stella and a boy, named Chris were the protagonists for a short internet film called "scapegrace". It was done by a small production company and talented camera crew and director, called Kevin Hayden. You can see some of his videos on his website. I will let you know when the movie is released if you want to watch.


Well, I must say it was quite the experience. Stella must have had her picture taken at least 500 times by passerbys in the 2 days. She was amazingly good about it all. Trucks, buses, cars, whizzing by, strangers touching her and posing with her. If I had charged $1 a photo, we would have made a ton.


Who knew that a goat in the city could cause such a commotion. It was very touching. I heard many, many stories from people who had memories of goats. A 75 yr old man originally from Yugoslavia, stood about 15 ft away, looked at her and shouted to me, "She is 5 or 6 years old". How do you know? I shouted back. "By the growth of her horns and the hairs on her nose," he replied. He didn't even have to look at her teeth. My vet isn't that good. Next thing you know we were deep in conversation about the herd of 12 white goats he was in charge of sheepherding at the age of 6 yrs old during WWII. Then the conversation turned to Tito and Stalin and how Tito survived Stalin's intended assassination plot.


There was a young man from the Ukraine who grew up on goats milk and was thrilled to tell me his experiences. A woman from Asia, when she saw the teats with milk, gave me 2 thumbs up with a huge grin, as she passed by. Children in absolute awe. A woman from South America with a cup in hand pleading with me for just a small amount of milk for the baby in her arms. Many people around the world have a very strong belief in the immune enhancing qualities of goat's milk for children. I grew up in Italy so I knew where she was coming from. Unfortunately, Stella was tired and would not stand still for me to milk her. People calling out in Spanish, "Leche! Leche!"


A woman passed by with a bicycle and stopped with tears in her eyes, petting Stella and recalling her childhood farm in Pennsylvania and the goats there and how much she missed them.


Stella and I were literally mobbed and had to take refuge in the tinted glass van for breaks from the crowds, in between shoots. We arrived the 1st day in NYC at 7 am and by 9 am people had already seen her picture on the internet and were blogging about her. Stella was quite the sensation. A man from the islands stopped and told me he had been in NYC since 1976 and had never seen a goat there. He was grinning from ear to ear.


Day 2 in Queens, I heard some old time cheese recipes, how to keep weight on her and several other tips from many old timers in that had been raised in Europe with goats. And one very kind man that stayed watching over her for hours until the end of the shoot, worried because I had not brought hay for her to lay down on, so she could rest comfortably. And when he touched her, her eyes closed in pleasure and she was soothed by his touch, as if she could feel, he was someone who really knew goats.


What an amazing experience; I learned that there remains an intense memory of goats as companion, friend, family member, and supplier of nourishment and joy, that still resonates very deeply within the human psyche.
I'm so lucky to have the chance to have them in my life again.