Have you had enough of Keri yet?

Our farm animals are a constant source of entertainment for me so it's hard not to write about whatever's entertaining me the most.  Right now it's a puppy and donkeys.

While I usually only tell of Keri's destructive antics I should also share that she IS a good guardian, even at her young age.  Last night I was sitting in the den at my computer.  Keri knew I was in here even though I didn't have a light on.  She sat outside staring at the window barking until I came outside.  She led me to the donkey barn where Chy and Wilson had returned after their day roaming freely in the yard.  I closed them in so they'd be with the goats for the night and Keri stopped barking.  I know she wanted me to put them where they belonged for the night.  I feel sure she's keeping other animals from our property too.  When my niece came to visit with her dog Keri could not rest.  She wanted no part of having another canine on our property even though he was about as mellow as a dog can be.  It's just not going to happen while she's on guard.  Great pyrenees have a strong dislike of canines.  Thank goodness we got her as a puppy and she adores our boxers, Rosie and Lex.  It's hard to imagine this sweet, bouncy puppy being agressive with other animals but here's proof she can be agressive. 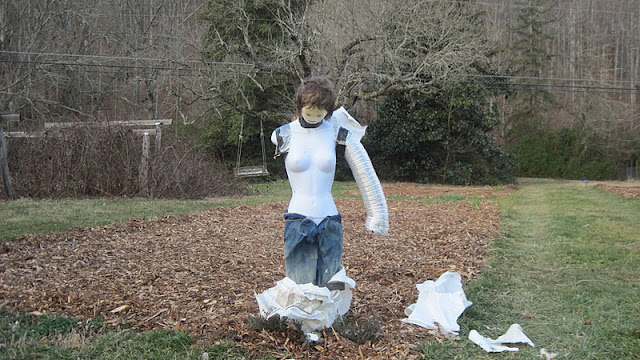 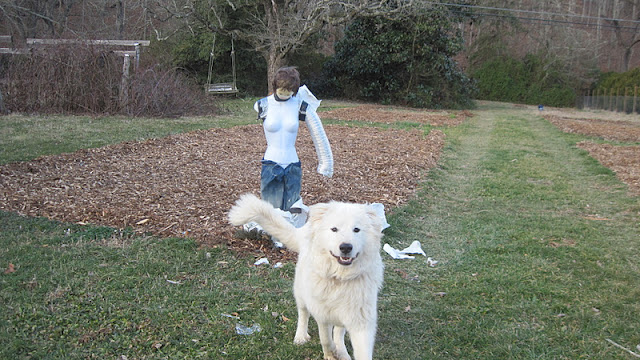 I took her over to the field today while I fed the pigs and mammoth donkeys.  I was distracted by the pigs so I never saw how she got in there with them.  There's one strand of electric wire around their pen.  The pigs completely ignored her and she ignored them.  She found all kinds of things in there to eat.  I don't even want to think about what it was. 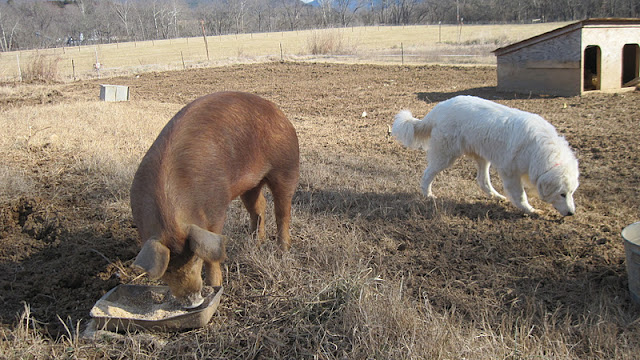 Keri looked small next to Roxie and Velma.  She didn't want to leave their pen when I called so I drove over to the donkeys.  I saw in my rear view mirror Keri duck under the electric fence and she didn't even cringe as her fur and tail hit it.  I guess her coat is too thick to feel the current.

The mammoth donkeys aren't in love with Keri like I am and they let her know this.

I wish I was in front of them so you could hear how loud their brays really are.  Listen how Chy brays in answer to their call.

Below is a sight we don't see very often. 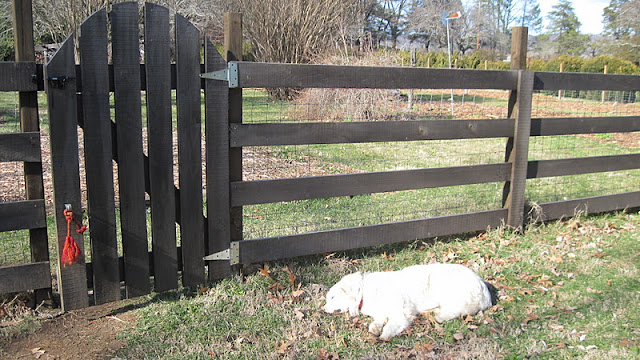