Art class is more fun in your 40's

Today I played the part of home school mom.  My 13 year old friend, Sophie, asked if I'd accompany her to the Frontier Culture Museum (http://www.frontiermuseum.org/)  for a class in painting floor cloths.  Her mom couldn't make it so I filled in.  I had never been to the museum and it was a real treat.   Sophie and I arrived at 10 AM and were greeted by our teacher riding in a golf cart.  We soon discovered all this attention he was giving us was because we were his only two students for the day.  Since it was just the two of us and the class was supposed to be till 4 PM he decided we had time to take a tour of the grounds.  It was divided into different areas - painting a picture of what a melting pot America is and how the Irish, English, Germans, Africans, etc. settled here and made America what it is today, a diverse culture.  First we visited America.  The log cabin we entered was owned by George Bauman who later changed his name to Bowman.  He moved from Germany to Phila., PA but moved to VA because land was cheaper than in Phila.  For those of you who aren't family, my maiden name is Bowman and my family lives outside Phila. so it was pretty cool that we began our tour in George Bowman's house.  I'm sure he was a distant relative of mine.  We visited the different villages and got to explore several of the houses and barns, my favorite being the log cabins and an octagonal barn and viewing some of the farm animals on the premises.

Finally we got down to work.  Our classroom was an old dairy barn, now turned into classrooms, library and lecture rooms.  Mr. Teacher showed us different styles of floor cloths and two small cloths he had started on his own.  They were very bland pieces in black, gray and white.  Sophie and I were unimpressed.  I think we both had something different in mind.  Maybe brighter colors or stencilling or something more than a black and white tile floor.   He wanted us to choose which one we wanted to copy.  We both reluctantly chose one, different from each other.  Neither of us wanted to hurt the teacher's feelings since he expressed to us that he was nervous about this class.  First he had us tape off the border of the small cloth.  When we put the tape down he made sure to press it down again to be sure we had it secure even though we'd pressed it many times ourselves.  We were told to paint it black so we did.  While it was drying we toured some more.  As the day wore one we discovered Mr. Teacher was a little obsessive compulsive.  He had a very hard time keeping his hands off our work, which really didn't bother either of us but we had a fun time giggling about it at lunch.  Every now and then he had to go "talk to someone or check on something".  When he returned he smelled very stongly of cigarette.  I think we were driving him crazy because we didn't do exactly as he wanted us to.  He was very nice and kept telling us we were doing a great job.  When I free-handed a blue diamond he almost choked and said, "oh, you're not going to do......."   I said, "nope", and he seemed to accept it without having a heart attack.  I think he may have had another cigarette after this.  He came back and tried to straighten out our lines.

Really, it was an enjoyable day and Mr. Teacher was a very nice man.  Sophie had an interview to be a volunteer at the museum for the summer and it went so well she got the job and that made it an even better day.  When we announced our pieces of art were complete Mr. Teacher couldn't help but ask Sophie if she didn't want to cover up a few of what he appeared to think were imperfections by adding a little paint here and there.  She smiled and did as he wanted.  Here's my cloth.  You can see why Mr. Teacher needed another smoke, can't you?  When I commented to Sophie that my square wasn't exactly square she told me it was "Karen shaped".  Exactly. 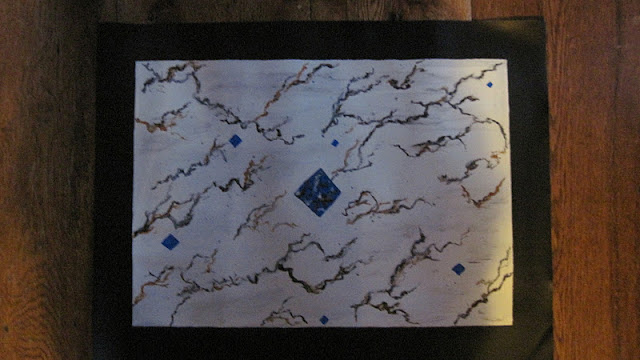 Before we were done he asked us if this class was ok and if we thought it was worth the money.  Poor man.  Yes, of course it was worth it.  I didn't tell him it was worthy of a blog entry.

Our next class is a carpentry class in another week or two.  Guess who the teacher is.