This rooster is a keeper

A few months ago a friend called to ask if I was interested in adopting 5 hens and a rooster.  Her friend's family had just acquired a bird dog and couldn't keep chickens anymore.  She told me the rooster was really special.  How special can a rooster be?  I picked the chickens up and they seemed nice enough.   It took awhile to integrate the few chickens I had left with the new ones and none of them laid eggs for a few weeks.  Slowly they all adjusted to each other and we began getting eggs.  The rooster came with a name, Foggy, as in, Foghorn Leghorn, since he's a Leghorn chicken.

Every night a few of the chickens, including Foggy, perch in the goat barn and I have to carry them to their coop.  I don't know why they don't put themselves to bed but I don't really mind carrying them to their resting place, especially Foggy.  When I lift him into my arms he often puts his head against my shoulder as if to cuddle.  He doesn't flap and flail like some of the hens do.  I think he even likes being held.  It doesn't matter how long I hold him, he rests gently in my arms like he trusts me.  He must have been held a lot as a young chick. 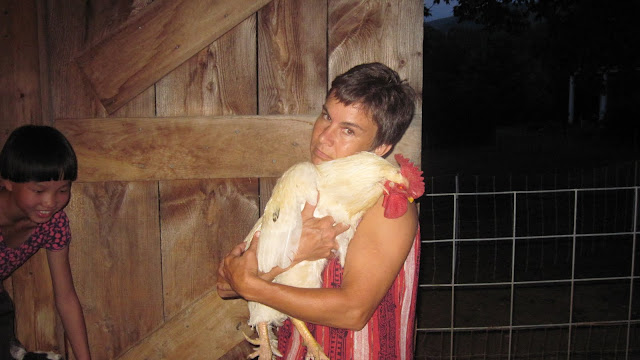 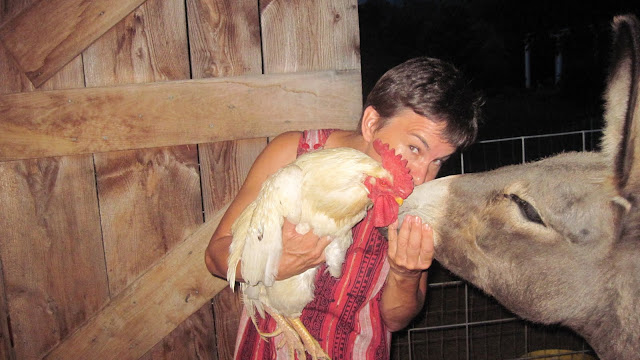 See how his legs just dangle?  He doesn't scratch or fight me or the hens.  He will never end up in a stew pot.  Yeah, he's a pretty special rooster.
Posted by kpannabecker and jpannabecker at Tuesday, August 02, 2011