Cooper has been struggling with a physical ailment but I don't know exactly what it is or what to do with him.  For months he has grazed while down on his knees.  I thought this was just his quirky way.  As time went on it looked liked he was limping and walking very stiff legged.  In the past week or 2 he's gotten very lame and lies around a lot.  It looks like he's in pain when he tries to get up or down.  He's been dewormed, had his hooves trimmed, eats well, poops normally and has been looked at by the vet and still we can't figure out what's causing this.  She said he has some atrophy in his rearend and legs from not getting exercise.  She's running some blood work to be sure it's not Caprine Arthritis Encephalitis, CAE, but we're pretty certain it's not that because he still has very good range of motion in his joints.  Also, his mom and sister tested negative for this so that makes it harder to believe it could be that.  CAE is passed onto kids through their mother's milk.  He hasn't wanted to go out into the pasture to graze on what little grass we have so I've let him out of his fence to wander around the yard, hoping he'd be tempted by the crabapples in the driveway and get some exercise.  Goats are herd animals so of course Jimmy is right by Cooper's side and won't go anywhere unless Cooper does.  I'm sitting on the front porch and this is what they're doing. 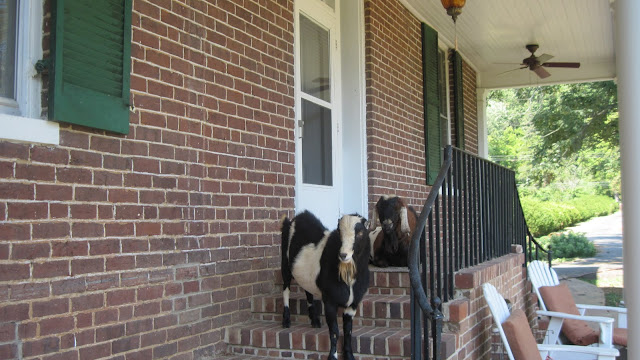 I did see him run today because I opened the front door and scared the daylights out of him so that was a good sign.  I've decided to give him some grapefruit seed extract mixed with water and apple cider vinegar to see if it makes any difference.  Hey, it's worth a try and it worked for Darla.  Yesterday I mixed up a batch of salve with grapefruit seed extract and oregano oil for the vet to try on some of her alpacas who are having some issues.  I told her to email me if she got good results.  I thought it was funny she wanted to try this.

You may recall a few years ago I tried drawing blood from my goats to do some testing and I didn't have very good results.  I ended up with blood on my clothes and never got enough to send off to the lab.  Yesterday when the vet was drawing blood I asked her if I could do one while she held her.  I'm very please to say I was successful and think I can now do this to all my goats myself so I won't have to pay a vet to do it.  I guess after all the needles I had to stick in Darla it gave me the confidence to stick a needle in the neck of a goat and know I could do it.

If anyone has any ideas about what's ailing Cooper please chime in.