The value of a pet

Darla and I had an interesting visit at the VA Tech School of Veterinary Medicine.  I'm not sure Darla thought it was as interesting as I did but she did enjoy a lot of the attention.  Most of the time we were there she was surrounded by 10 to 12 people - students, doctors and technicians.  They took turns asking me questions about her history and about my other animals.  Several of them took turns running their hands all over Darla, squeezing the abscess and checking her vitals.  All the while she stood there very still, or sniffing their faces or chewing on them.  When they wanted her to lie down for her ultrasound she stayed just how they put her, not one bit of a struggle.  I felt like she was putting on a show for them.

They gave her a sedative so they could cut and probe her neck but even with that she cried just about the whole time they dug around in there.  This was the only time she put up a fight.  I had to leave and use the restroom to get away.  They did this for over 15 minutes but it seemed even longer.  They didn't see much pus but are doing a culture on what they drew out.  They put a drain in and taught me how to inject a new (to Darla and me) antibiotic into the abscess twice a day, along with giving her 2 shots of the same antibiotic.  This is to be done for 10 days.  We were there 2 1/2 hours.  There was some down time where we had to stand around waiting while they gathered our medicines and wrote up their procedures and a bill.  During that time I had a conversation with one of the vets and a technician about how much people go through for their pets.

The vet told a story of a young couple who brought in their hamster to have a tumor removed.  The surgery was going to cost $100.00.  There was no young child involved, just these 2 adults.  We laughed about how many hamsters you could buy with $100.00 but all of us understood where they were coming from (kind of).  The technician told me how he brought home his 3 rats that he had worked with in his lab for so long.  He couldn't part with them when he left school.  He did assure me that when they died he didn't replace them.  The vet said he learned a good lesson when he was watching a surgery being performed on a horse.  He said it didn't look very special but the owners were dumping all kinds of money into this horse.  He asked the attending surgeon, "is this a valuable horse or something?"  The older gentleman answered, "young man, an animal is worth as much as a person is willing to pay for it".  I asked them if they were going to make fun of me for going to all this effort for a crossbreed goat, or a food animal as they called her (making apologies to me when they'd use that term).  I don't remember them answering.

They explained to me that this bacteria is very hard to treat and may not be successful but I feel like Darla is worth every dime it cost me.

My niece sent me this picture of me and her playing veterinarian.  She held Darla while I aspirated her abscess.  She will be a vet in only 2 more years.  I'll stick with raising goats. 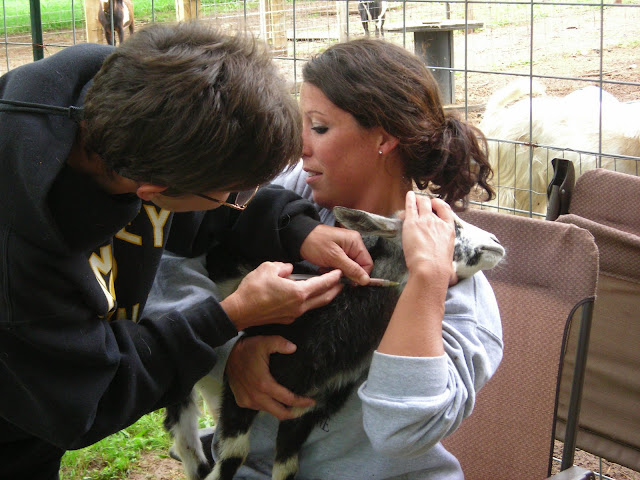