A few days ago I adopted 6 chickens from someone who could no longer keep them due to acquiring a bird dog.  We've been getting so few eggs since we're down to 3 hens and 13 young chickens too young to lay.  At first things went pretty well with introductions.  The 6 new ones didn't want to join the others in the coop the first night so I put them in there myself.  The next morning everyone was still alive so that was good.  I saw some posturing and feather pulling a little later in the day but I figured that was to be expected.  Bedtime came around again and I found the 6 newcomers in the goat barn perched on shelves and stall walls.  James and I put them up in the hay loft which is 7 feet off the floor, figuring they'd be happy and safe there. 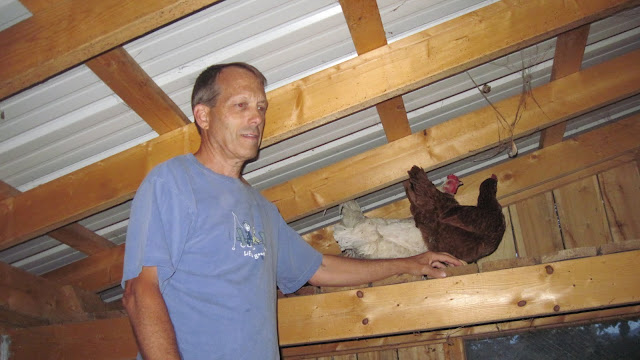 This morning I went out to the barn around 8:30 and they were still up there.  I don't know if they were too scared to fly down 3 1/2 feet to the stall walls or if they were just happy up there.  I put a ramp up so they could walk down if they wanted.  Right away Betty White walked down.  A moment later one of the red hens flew very gracefully to the floor.  The other 4 stayed put, including the rooster, Foggy (as in Foghorn Leghorn).   I ran errands and when I returned they were still there so I put water and food up for them.  I added steps on the ramp so it wouldn't be so slippery.  Still, they remained in the loft.  It's time to roost again and Betty and the other red hen put themselves to bed up with the others.  I hope tomorrow the other 4 follow them down the ramp. 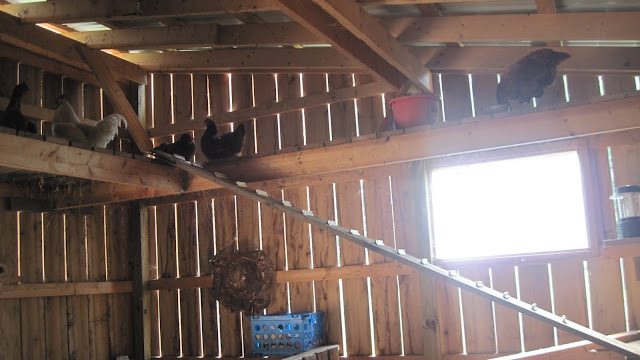 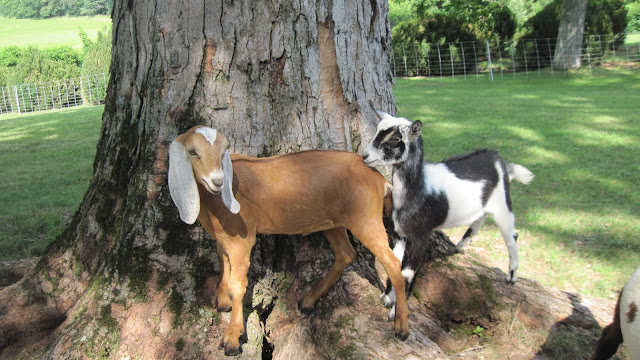 It's always hard taking babies from their moms.  It's even harder when they cry.  Tila cried just about non-stop for 3 hours - very loud.  She's still crying but not as often and she sounds a little horse, which is even sadder.

I had to separate her from the donkeys because they chased her.  For some reason she's still fascinated by them and I've seen her nose-to-nose through the fence with Shiloh.

I can still hear her crying now.  It's like hearing a crying human baby and not being able to make him or her stop.  Or maybe like a crying puppy the first night you bring it home.  It makes me feel a bit tense.


Ok, just got in from putting kids to bed.  James held Tila for awhile before putting her in with Winnie and Rudy.  She seemed to like that.  She did not like being clobbered by them both when James put her in their stall.  He picked her back up and tried Darla and Benny.  Darla seemed to like her earlier today.  Ummm, but not in her stall at night.  I couldn't believe my sweet little Darla could hurt a fly.  I suggested he try putting her with Harlie and Celia.  Well, anyway, she ended up being with just Celia.  James put Harlie in with Winnie and Rudy.  I sat on the floor of Celia and Tila's stall and cuddled them awhile.  I can't say they were best buddies but at least no one was beating anyone up.  When I left the barn all was quiet.  I hope they're sleeping.

Oh how I hope tomorrow is a better day for everyone.
Posted by kpannabecker and jpannabecker at Wednesday, June 15, 2011