Here are two gift tags from our Christmas gifts this year. 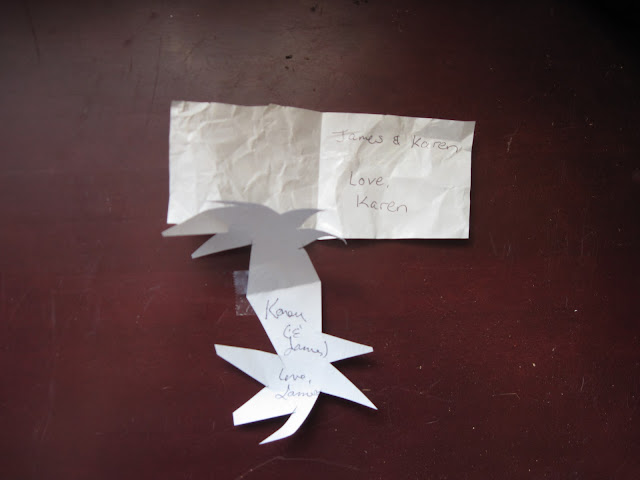 Both of us addressed the card to both of us instead of just the other person.  The gifts?  Two cheese slicers.  They aren't the same kind but still it was funny that we both gave ourselves the same thing.  I can't recall the two of us ever discussing how we should get one.  We broke our old one about a year ago so it's not like it happened right before Christmas when we were trying to come up with gift ideas.  Yes, since I make lots of cheese, we eat lots of cheese.

I'm told when you live with someone you become more like them or at least think like them.  I guess that's true.  It even happens with me and Adam.  He can attest to that.  Even though he's away at school he and I sometimes must send each other signals through space.  I can't tell you how many times one of us calls the other and the other laughs and says, "I was just dialling your number".  Or we open our cell phone and the other one is already on there without it ringing.

This must happen to all families but lots of times I think things happen to everyone else and I'm told they don't.  For instance, I'm a dreamer, and I don't mean in my sleep (I do that too though).  I mean I always have dreams about what I'd like to do, places I'd like to live, things I'd like to build, whatever.  One of my friends tells me she doesn't have dreams.  I don't believe her but maybe I should.  I even found myself making suggestions of things she might dream about.  So is there anyone out there who has never felt a "thought connection" with a family member?
Posted by kpannabecker and jpannabecker at Wednesday, December 29, 2010