First snow of the season

Our grass is just about covered and it's still snowing.  We're only expecting 1 to 3 inches.  That's perfect for a first snow.  Actually, it would be perfect if it was our last snow too.  Fat chance.  It really is pretty though. 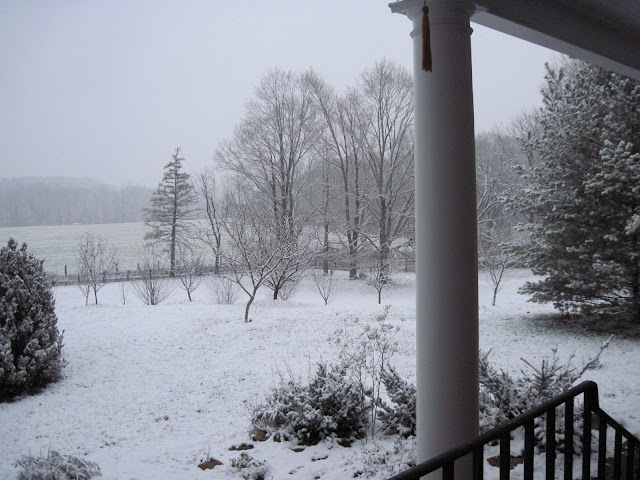 I see Christmas lights going up here and there but, as always, you won't see much of a Christmas display at our house.  I thought about decorating this year (as I do every year) but I doubt you'll see more than a wreath on our front door.  I do love the holiday and today's snow puts me in a Christmasy mood.  I even broke out the Christmas sheet music and played some very bad guitar but it felt good anyway.  As I type this I'm playing an Amy Grant Christmas CD.

James was sick today so he took naps and bundled up in blankets.  I turned the thermostat up to 60.  Here's a picture of him at his perkiest today.  I washed these coveralls and gave them to him right after they came out of the dryer so they were nice and toasty. 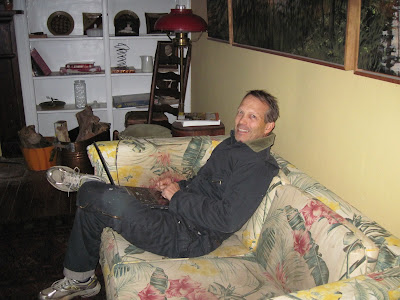 I didn't make the picture extra large because he commented on how messy his hair was.  He had toast for breakfast and chicken noodle soup for lunch but I'm cooking up a chicken now to make more chicken soup even though he already had some.  It just sounds good on a cold, snowy day like today.   Actually it's going to be rooster noodle soup, which makes me think of this.....

Does anyone reading this get the channel Planet Green?  On Dish Network it's channel 194, one of the Discovery channels.  We don't get it but I wish we did.  There's a show on there called The Fabulous Beekman Boys.  I've heard great things about this show and have watched every clip I can (there are at least 80 of them) since I can't watch a full episode.  I'm hoping one of my friends or my family will record this show so I can watch it sometime.  The show is about two gay guys who give up their careers and buy a farm to see if they can make it for a year.  One of them is a doctor and the other an author.  The doctor worked for Martha Stewart for a time and the author was previously a drag queen.  They're funny and really interesting.  Also living on their farm is Farmer John who brought his goats there to live.  Many of the episodes appear to be about the goats.  They're trying to live a sustainable lifestyle and I think it's great they've made a TV show about it.  Here's one of the clips that brings tears to my eyes but I think is so important for people like me (and probably all Americans) to see.  http://planetgreen.discovery.com/videos/the-fabulous-beekman-boys-from-farm-to-fork.html
If anyone has seen a whole episode let me know what you think of it.
Posted by kpannabecker and jpannabecker at Saturday, December 04, 2010