Yesterday my friend, Emily, lost her donkey, Buttercup.  Buttercup had just had a baby, Dallas, 4 months ago and I can't imagine how he felt when he saw his mama lying on the ground.  Buttercup was a rescue donkey with a skin condition, and I guess something more serious, which her owners didn't know the name of.  She was an affectionate girl to her caretakers and they wanted to make her comfortable and, if possible, find a way to heal her. She was the reason Emily fell so hard for donkeys in the first place.

I wrote to Emily last night to ask for a photo of Buttercup to include in my blog and she told me she'd send me one later because at the time I asked they were in the middle of burying her.  Burying an animal is hard but burying a large animal seems even more daunting and sad because it would take so long.

I know many of us project on our animals.  We think we know how they feel and what they might be thinking.  It's probably silly but it's hard not to do that when you're an animal lover.  Yesterday Shiloh was over with the boy goats and started braying for his mom.  She took her time but finally called back to him.  He went tearing away to be with her.  I keep thinking about Dallas and how a 4 month old donkey feels about losing his mother.  Projecting or not, it still brings tears to my eyes to think about.  Emily said when she went out and found Buttercup lying on the ground the other 3 donkeys gathered around with her.  After she was buried the 2 girls and Dallas kept sniffing the ground and the girls were nuzzling Dallas as if they knew something was wrong.  Maybe they will take to mothering him. 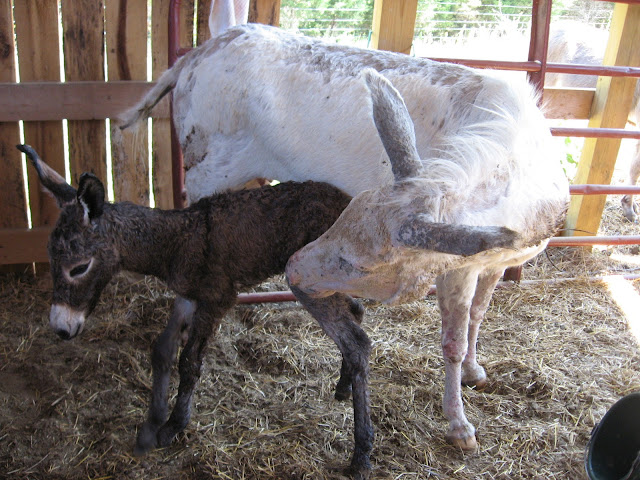