Well not really but we are the proud owners of 19 little turkey chicks.  On our way out to milk this morning my phone rang.  It was Tracy from the post office telling me my peeping package arrived and that she was just going to play with them until I got there to pick them up.  The postmaster met me at the back door with the noisy box.   "Really?  Twenty turkeys are in there?"  The box was only maybe 12" X 8".   He said, "that's it".  I rushed them home to get them under a heat lamp. 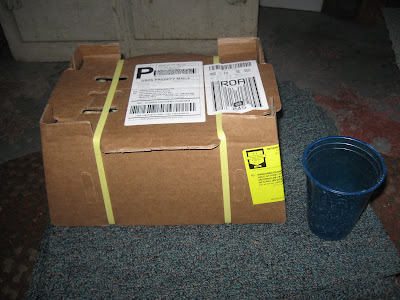 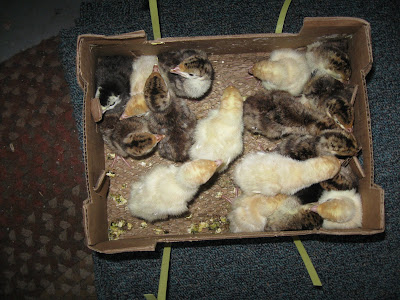 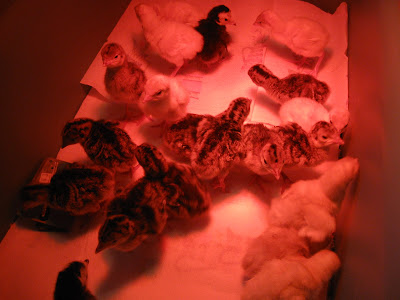 Within an hour one of the yellow ones died.  Yesterday we read that we can count on losing 30% of them when ordering them through the mail.  I hope not.  Last I checked (and I check every hour or 2) the rest were all still pretty lively, eating and drinking.  There are at least 3 different varieties but I'm not completely positive what they are.  I know we have 2 Black Spanish turkeys, several Bronze and then either Large White or Royal Palm turkeys.  I was hoping for some Bourbon Reds but it doesn't look like any of them are unless their color changes in the next few days.  I ordered an assortment from McMurray Hatchery and they don't tell you what you get.  I'm just going by pictures I've seen on the internet and what I know McMurrays sells.  Here's a link with some pictures of the varieties I think we got.
http://images.google.com/imgres?imgurl=http://www.cacklehatchery.com/white_turkey_poults.jpg&imgrefurl=http://www.cacklehatchery.com/turkeypage.html&usg=__NhG_jVnnyQA5CFfGwNn4Z0kB2V8=&h=377&w=504&sz=62&hl=en&start=1&um=1&itbs=1&tbnid=-B1rBqJiXThtQM:&tbnh=97&tbnw=130&prev=/images%3Fq%3Dturkey%2Bpoult%2Bpictures%26um%3D1%26hl%3Den%26safe%3Doff%26client%3Dfirefox-a%26sa%3DX%26rls%3Dorg.mozilla:en-US:official%26tbs%3Disch:1

Pretty awesome birds.  I can't wait to see them running around our yard.  Neither can Rosie, our female boxer.  Every now and then she chases the ducks or chickens but gives up just before she could grab them.   A large turkey might give her a run for her money.

Today was supposed to be the hatch day for half of my chicken eggs in the incubator.  It doesn't look like that's going to happen.  No eggs are even wobbling.  I don't know what I was thinking setting eggs to hatch around the time the turkeys were to arrive.  I have no place to put them and no more feeders.  I'm totally unprepared so I guess it's good none are hatching.

Tomorrow I'm going to pick up my cow, llama, pig and donkey.