I've been wanting to have my goats tested for Caprine Arthritis Encephalitis (CAE) for quite a while but when I tried to draw blood myself it didn't go so well.  I thought I blogged about that experience but I couldn't find it just now in my titles.  I had two friends come over one day and they held the goats while I attempted to stick a needle in the adult goats necks and draw blood.  I was successful with a few in that I actually drew some blood but not enough to send for testing.  I had more blood on my jeans than in the tube.  I gave up.

This week I broke down and decided to pay a vet to make a house call to draw the blood from 6 goats for me.  He got here at 10:00 am and was done by 10:10.   When he arrived he asked, "will you be able to catch them?"  I said, "sure".  He said, "sometimes goats are harder to catch when strangers are around".  I said, "No, it'll be fine".  We went in their fence and I grabbed Polly.  He told me how to hold her and he drew blood lickety split.  I walked up to the next one, held her and we repeated the process.  I think he was amazed how none of them put up much of a fight.  He told me I was a good technician.  I was flattered but know the reason it was so easy was because my goats are so spoiled by me that they're used to being handled.  He asked me if I did my own disbudding, castrating and vaccinating and I told him yes.  He said he'd rather have people do these things themselves rather than call him for these simple jobs.  I was feeling pretty proud by the time he left.  So proud that I think I should try again to draw the blood myself.  He asked if I wanted to practice on one while he was there but I couldn't bring myself to do it when I hadn't psyched myself up for it first.

I haven't had any suspicion that my goats have CAE but many people won't buy goats from you if you haven't tested them for it and proven your herd is clean.  Also, if I want someone to bring their buck here for me to use for breeding they may not bring him unless I've had the testing done.  So I'll know in a few weeks I guess.

Here are a few pictures of the vet, me and my well-behaved goats with needles in their necks.  James came out with a camera and asked the vet if he'd mind if he took pictures for my blog.  I think the vet thought that was weird but didn't care.  He said he couldn't believe so many people read those things. 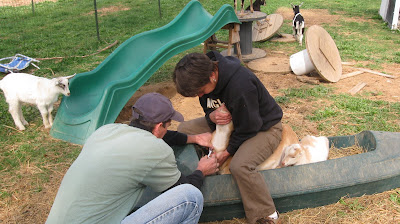 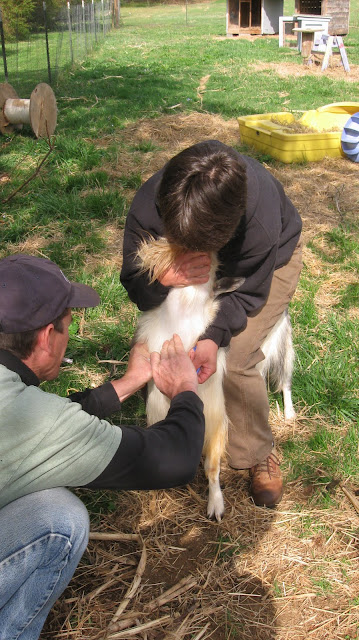