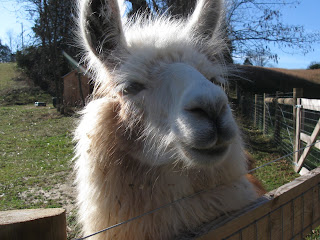 My friend and I trade off help at each others "farm".  She and I met at a party and soon found out we were both new to sheep and goats.  She has 6 sheep and I have 6 goats.  It works out well.  She also has a llama, Bo (or Beau).  Today was my turn to help her with her animals.  The llama was the easiest.  He's very motivated by food so it was easy to get him where we wanted him.  All I had to do was hold his rope.  Susan did the trimming. He's a handsome fella.

The sheep are a bit harder.  They're more nervous and we have to trick them to get them in the pen.  We flip them onto their backs and most of them stay very still for the trimming.  If they're kept on their backs too long they start to squirm.  I'm the holder while Susan did the manicures, no polish.  We did, however, do some aromatherapy with some special oil that's supposed to help their digestion.  I think that's what she told me.  It smelled really good.  We put it on their ankles and tummies.   I did the last 2 trimmings.  I sang songs or talked to them.  I'm sure they were soothed by my angelic voice.  Susan may not have enjoyed it as much but she didn't tell me to quit. 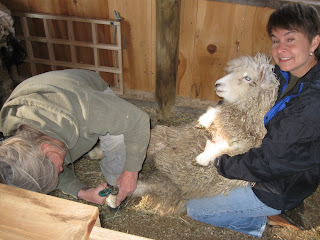 Now I smell like sheep or sheep manure.  mmmmm.  I ran some errands afterwards.  I wonder if anyone smelled me.   Oh well, we live in Rockbridge County, VA.  I bet a lot of people smell like farm animals around here.
Posted by kpannabecker and jpannabecker at Tuesday, December 01, 2009