The best neighbors you could ask for 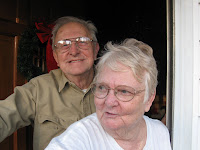 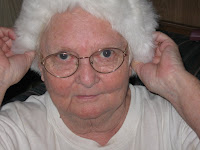 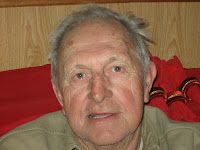 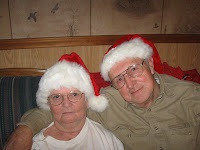 This is Shirley and Feenie, our neighbors and good friends across the creek.  I know I've mentioned Feenie in my blog before but I don't think I've introduced you to Shirley until now.  Today I showed up at their house unannounced like always.  They've never turned me away and always seem happy to see me.  Go figure.  After spending an hour or 2 there I got up to leave and they said (as it seems to be custom to say here in the valley) "what are you leaving so soon for?  You don't have to go".  You could stay 6 hours and that's what older people in the country say.  They act like you just got there.   I don't know if they really mean it or if that's kind of like saying goodbye.  I really don't think they're faking it though because there's no pretense about them.  I can always let my hair down and be myself in their home.

I asked them to put these Santa hats on and they did.  You see, they'd do just about anything for me and I'd do the same for them.  Today I helped them put together 2 plastic snowmen with lights in them.  When we were finished Feenie said the sweetest words, "well, you're about as helpful as a button on a shit-house door".

Lots of people don't even know who their neighbors are.   That's too bad.  Of course we don't know all our neighbors personally, but most of us wave when we pass each other in the car.  It's what people do here.  One of my sisters was visiting once and said she felt like waving to everyone because they all waved at us.

Our teenage son's car broke down once just yards from our driveway.  We weren't home to help so when he called us we told him to wait by the car and someone would eventually stop and help.  It was only minutes until someone pushed him into the driveway.  I can't go for a walk without someone offering me a ride.  I could go on and on about how neighborly people are here.  Like Green Acres, it's the place to be.
Posted by kpannabecker and jpannabecker at Wednesday, December 09, 2009