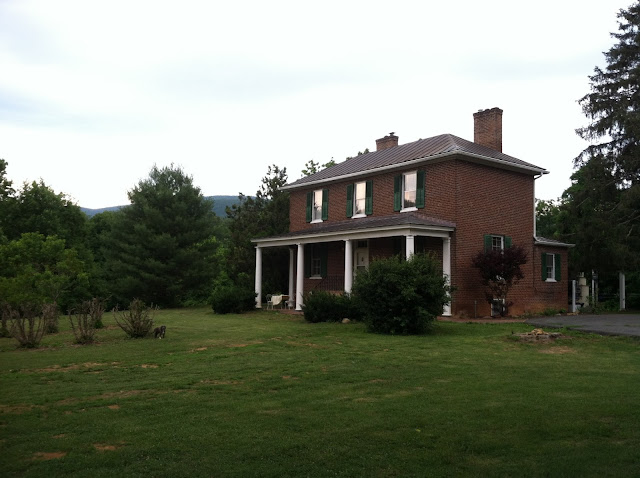 Our house was built in the early 1870s.  We're the 3rd family to live here.  I've never really been a history buff but I do like to hear stories about our house and the other families who preceded us.    Occasionally a relative of one of the other families stops by to see the house or reminisce.  We were told by an old-timer around here that his grandfather helped build the two over two brick structure.  He slept in the train cars by the river and came up to build the brick right here from clay on the property.  I don't know if that's true or not but it's what we were told.  The house was built by Colonel Anderson as a wedding gift for his daughter. Our son Adam is engaged to Melissa Anderson.  Perhaps she's somehow related to the original owners.  That would be a coincidence, wouldn't it?  Colonel Anderson's daughter and her husband (I should find out their names) had a son, Miles Poindexter, who grew up to be a US senator for the state of Washington.  When he retired he returned here and died in this house.  We're told every morning he'd jump in the bitter cold Elk Creek behind our house.  Again, I don't know if this is true and it's hard to imagine, but it's a story we've repeated since we heard it.  It looks like the unsmiling Miles is holding an IPhone in this picture.  Kind of a handsome guy, huh? 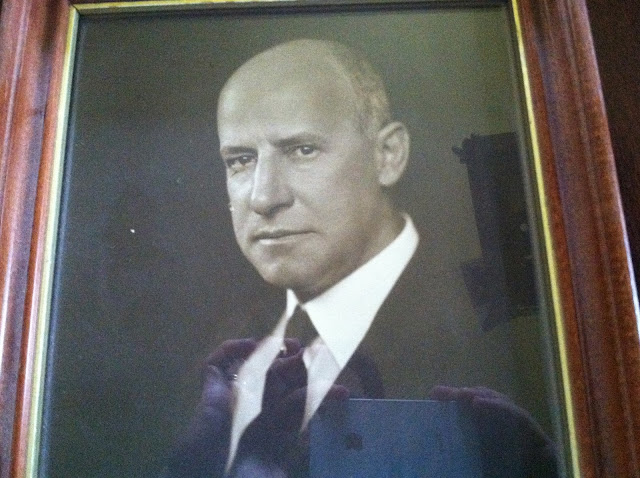 The next owners were Leonard and Beulah Cash.  We never knew Leonard but we met Beulah (then 93 years old) when we bought the house and got to know her better in the 3 or 4 months before she moved away.  She was a charming, witty and funny lady.   She could also be sarcastic, which is one of the reasons I liked her so much.  I wish I'd met her earlier.  I think she and I would have been good friends.  That's her on the left, sitting next to her sister.  When she laughed I couldn't help but laugh with her. 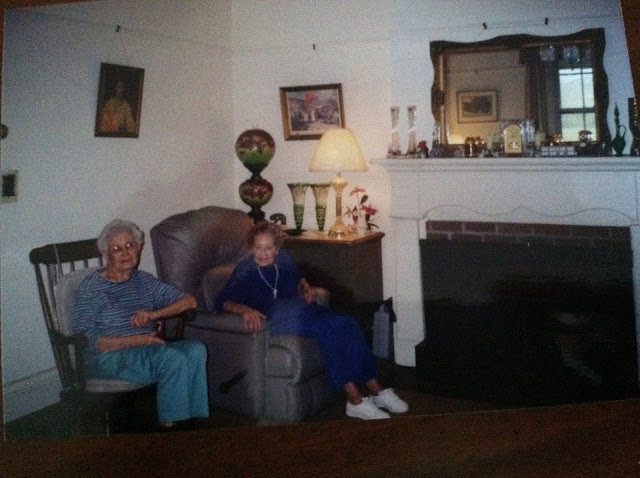 The reason I'm blogging about my house today is because once again I'm pealing back layers of history.  Layers of paint that is. 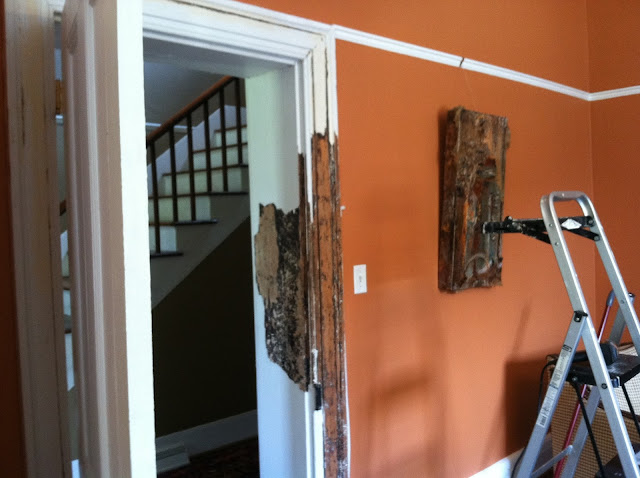 Mrs. Cash lived here for 50+ years and probably touched this door frame more times than I can guess, especially in her final years, as she was blind and probably needed to touch things as she moved about. Because she was blind, the house was in disrepair and it took us more than 2 years to fix up before we moved in.  There were holes in walls, ceilings, leaks in the slate roof, etc.  We've been in the house maybe 10 years and it needs updating again.  I just couldn't put another coat of paint over this door trim.  I have a feeling the windows and other doorway in this room will get another coat when I tire of stripping this entryway.  Patience is not my middle name, that's why I didn't do this the first time around.  There was too much else to do.  In the picture below on the left you can see where I washed a small section of baseboard.  The 40+ year old gold wall-to-wall carpet had already been removed.  The picture on the right is a partially stripped fireplace mantle and a hole in the bricked up fireplace with ashes spewed across the dining room floor.  This was not a nice surprise, though I did laugh when it happened.  I didn't know what else to do as the sledge hammer gave way to the grey dust that went everywhere. 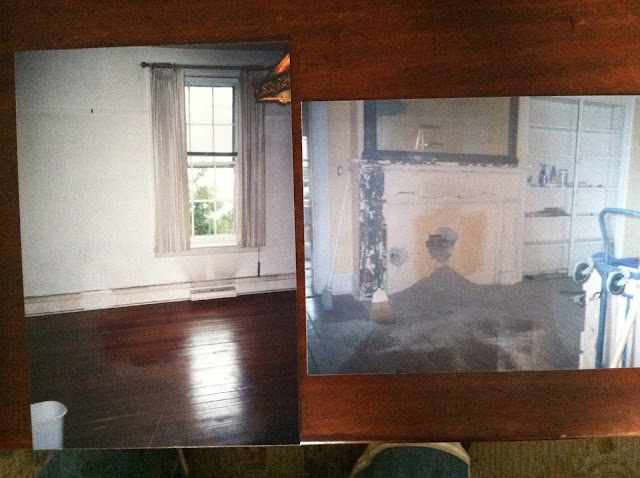 The plaster was falling off walls and ceilings in the bedrooms so we removed layers of wallpaper and paint and tore down lots of plaster and lath.  We leveled the ceilings and then put beadboard up. 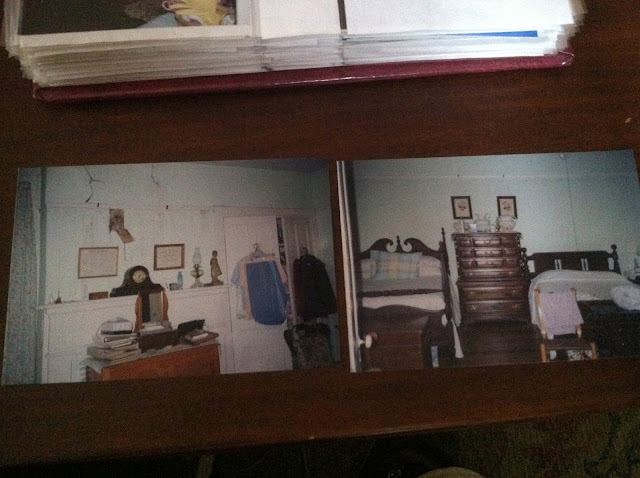 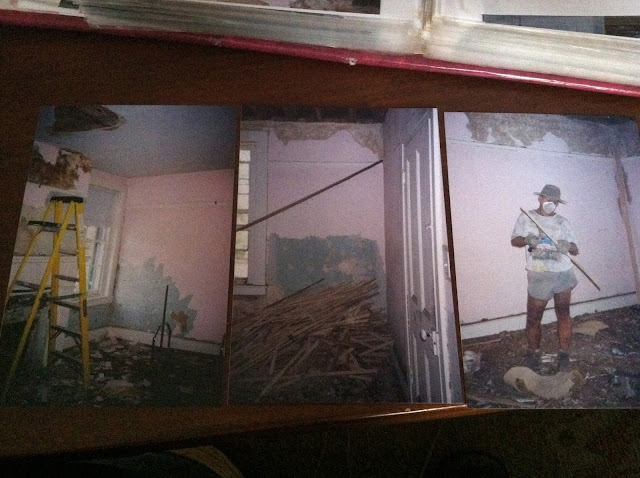 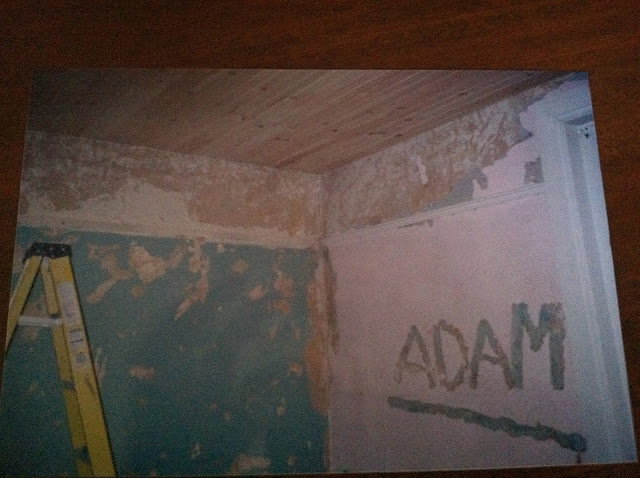 The bathroom underwent a major transformation.  We removed the front wall, made the doorway smaller, removed the tub and built a shower pan, chiseled out 4 inches of concrete from the floor and installed heat (it had none), then tiled the room. 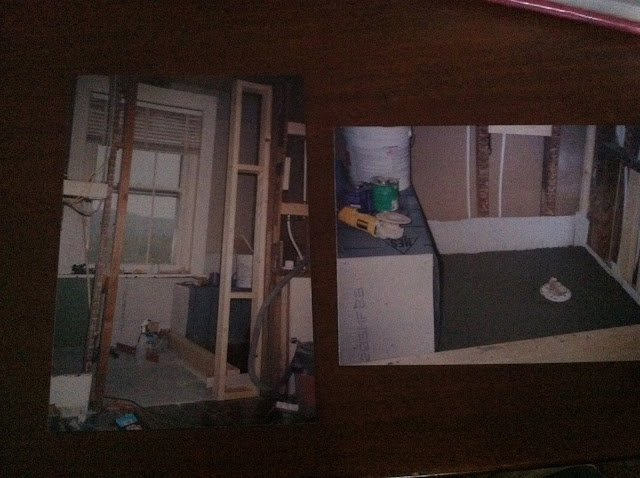 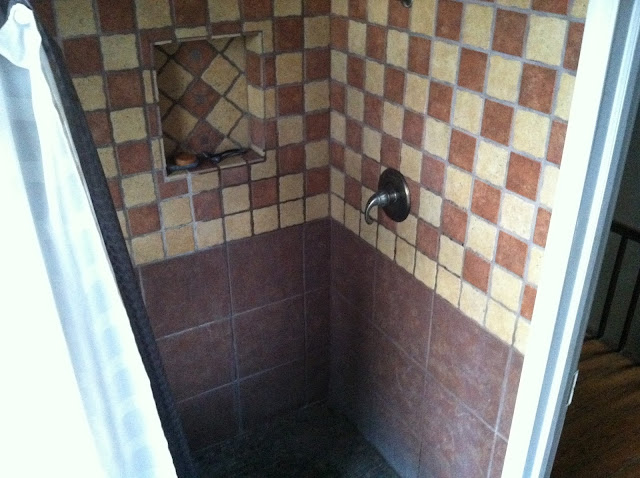 The kitchen also needed a complete overhaul.  The refrigerator was in the hallway because it didn't fit in the kitchen because of the wood cook stove and electric stove.  Much plaster was chiseled from the walls, which were wire brushed to expose the brick, then sealed.  The linoleum was removed and a new/old (reclaimed lumber) floor was put in.  Most of the walls in our house are solid brick so we had to add outlets in the kitchen by cutting grooves in the wall for the wires. 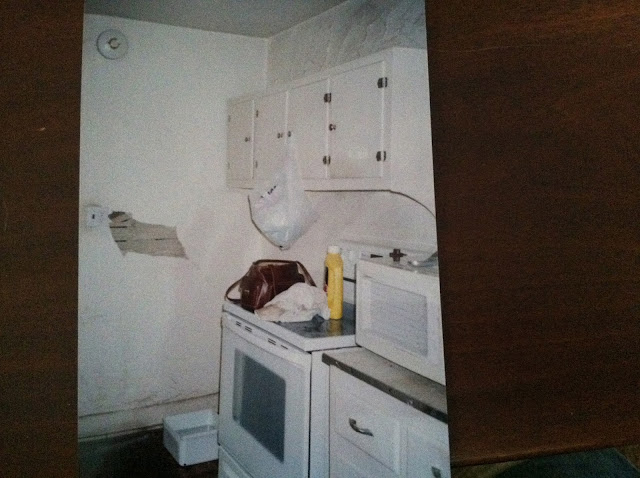 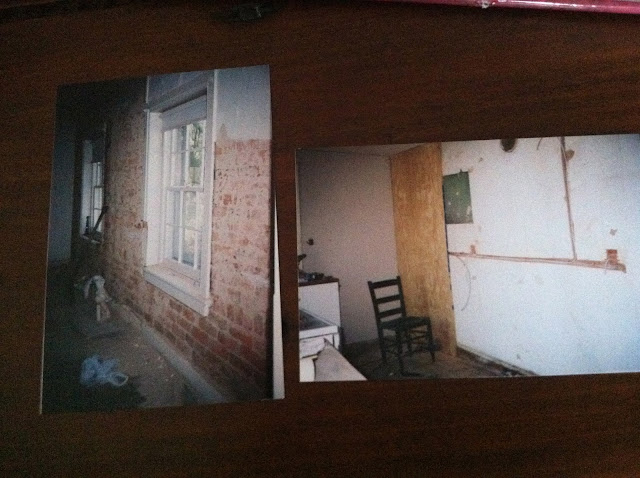 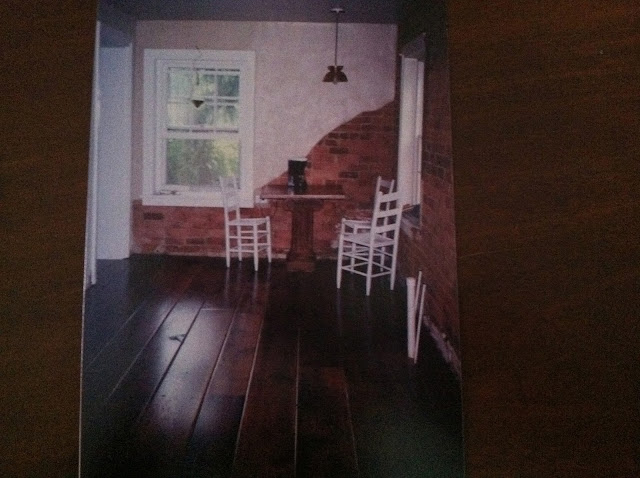 The outside also needed lots of attention.  The leaking slate roof needed to be replaced.  It had been tarred over so individual pieces of slate couldn't be inserted.  We chose a copper roof instead.  The front porch had to be jacked up so we could replace the rotting sills (?) that rested on the columns and put beadboard in place of the vinyl ceiling. 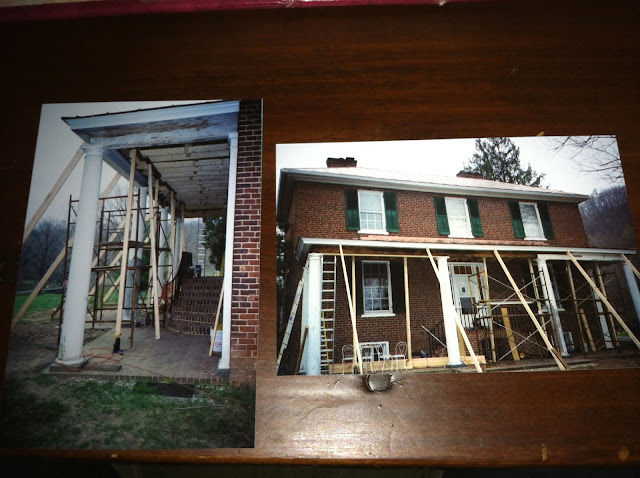 The back of the house was much more fun than the rest of the improvements because it wasn't a necessity.  We removed the overgrown ewes and put in a patio, brick oven, bbq pit, cupboards, countertop and pergola.  It was a big undertaking but very gratifying work. 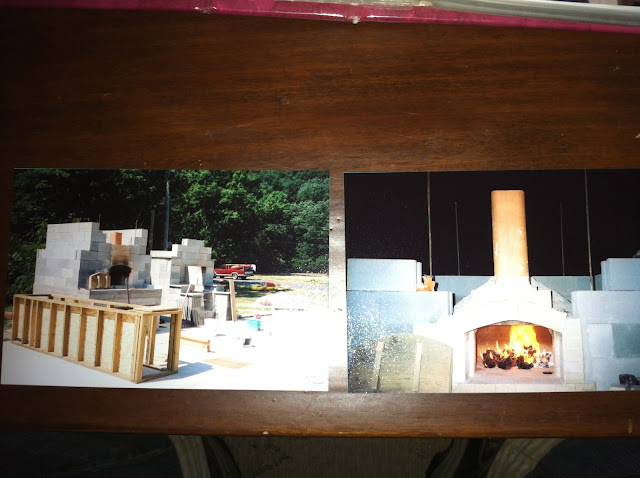 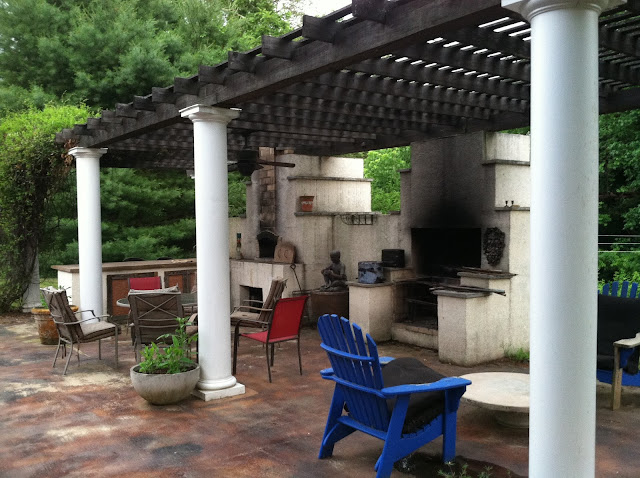 As I look at this last picture I see a tired outdoor kitchen that needs attention.  That's how I feel as I look around our house these days.  I see work.

When I was in PA recently visiting my family I told them I'd like to build a small home from scratch.  My one sister seemed surprised that I'd like a new house.  It's not that I don't love this old house.  I do.  I just wonder what it would be like to live in a lower maintenance house.  I truly am thankful that our house is so solid and I appreciate the workmanship that went into it.  I even like the way our stairs are worn thin in the middle of every tread from all the feet that climbed them in the past 140+ years.

It's fun to dream of a new house but I'd hate to leave this farm.  I kind of like the idea that we're leaving our mark on this home for the next owners.  Maybe they'll somehow stumble upon my blog one day (if there are still blogs then, or internet) and see these pictures and learn a little bit about the 3rd family to live here.  I wish the Poindexters and Cashes had kept blogs or journals for me to read.  Maybe I should print out these 6 years of blog posts and hide them somewhere for people to find.

I just killed an hour writing this blog when I could have been stripping paint.  I guess it's not going anywhere -- And neither am I.