It was beautiful today so we harnessed Willo up and took her for a drive. 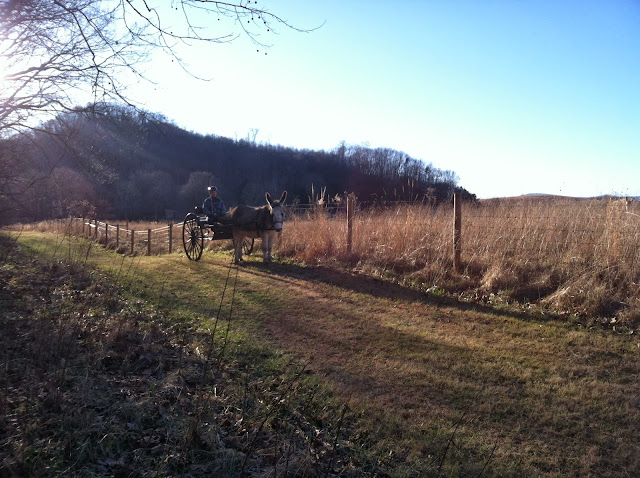 Like her owner, Willo has put on a few pounds and her harness was a bit tight.  Exercise was just what she needed.  Jaz got some exercise too because she followed us along the fenceline whenever she could.  She was very jealous.  We're now storing the cart in Raisa's barn instead of up by the house.   Maybe we'll use it more often if it's more convenient.

As we crossed the field after our ride we saw Keri scooting on her stomach to get out of the chicken coop.  The doorway can't be more than a foot high so it seems it would be uncomfortable for her to get in and out.  Light bulbs went on in our heads.  We haven't gotten eggs in a very long time.   Could it be the chickens are laying but a big rascal has been stealing them?  We're going to keep them locked up for a few days and see if we start getting eggs again.  We also need to figure out what we're going to do with the chickens.  They keep going in the road.  We've already relocated them once but this morning they discovered a different road.  Why would chickens leave 26 acres to stand in a road?  Next we may move them down near Raisa, far from the roads, but I don't think they'll be safe down there.  I may try closing them in with electro-netting but some of them are really good flyers.  Sometimes I think I should give up on chickens and buy my eggs from friends.

I wonder what the new year will bring.  Happy 2014.
Posted by kpannabecker and jpannabecker at Wednesday, January 01, 2014