Caring for livestock in the winter

Eighteen degrees, the thermometer said.  Yuck, I said.  I had to get outside early because the door to the horse trailer was closed and I knew the goats were in it last night.  The wind must have shut them in and Keri out.  I didn't even have a cup of coffee, which I selfishly have every morning before going outside to feed.

The water buckets had at least an inch  thick layer of ice on them.  I decided to fill a bunch of 5 gallon buckets, load them in a wagon and pull it with my lawn tractor so the goats would have warm water to drink.  First I had to empty all the buckets and melt the ice off them.  Next I had to put air in all 4 tires of the wagon, which hadn't been used in a very long time.  At least 1/3 of the water sloshed out on my way to the field but I had plenty to fill the goats big tub with.  I thought they'd go nuts over it.  Goats love warm water.  Only Cato drank it and I worried because his long ears were dangling in the water and I feared frostbite.

I own 2 heated buckets and I was glad to see they both still worked.  I should probably get some more.  I'd also like to have a heated chicken waterer.  The one I had in the coop was a solid mass of ice.  When I went to let the chickens out I discovered another reason we're not getting the eggs I'd expect from the hens.  Three of the "hens" are roosters.  I had been suspicious of a few but today they made it very obvious.

My milking machine doesn't like the cold so this morning I heated up one of those rice bag heating pads and wrapped it around the pulsator.  I don't know if it helped or not but it eventually reached the suction pressure I needed and all was well.  It was windy and I could see evidence of Raisa having spent a good deal of time in the part of the shelter that was out of the wind.  None of the animals like the cold wind.

The little black pigs no longer sleep in their own little shelter.  Last night I saw them sleeping under the stock trailer the other 3 pigs sleep in.  Late this afternoon I saw the black pigs come out of the trailer so I wonder if tonight all 5 will curl up together inside.  I hope so.  The young pigs don't have much hair or fat to keep them warm like the others.

Morning chores took 3 hours instead of my usual 1.  As much as I dislike the cold, I really didn't mind it today.  It felt good to be moving and it was probably good I went straight outside instead of sitting down, sipping my coffee in front of the computer.  I may not have wanted to get up if I gave it too much thought.

Lex is glad he's an inside dog.  Next week when temperatures drop into the single digits you may see me wrapped in this blanket with him. 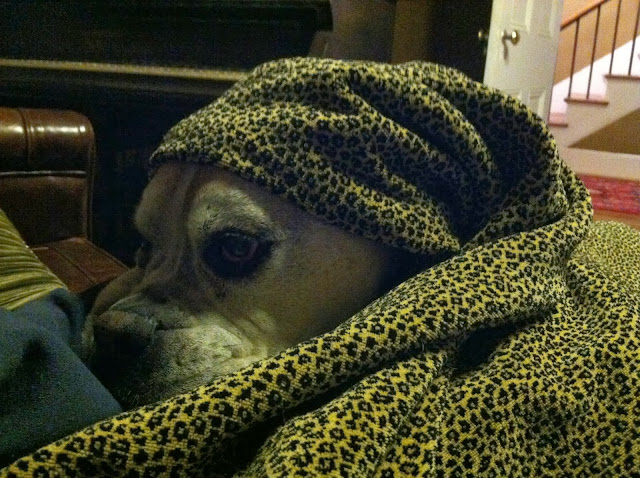