After a busy 4 days in New York City it was nice to return to the slower pace of Rockbridge County for Thanksgiving.

While eating at a cafe in the financial district James and I eavesdropped on a conversation between two young ladies who it appeared worked nearby.  One of them said her parents grew up raising all their own meat and vegetables and even made their own soap.  I wanted to tell her there are lots of people doing that again these days.  I imagine it's hard to imagine that kind of thing when you're surrounded by concrete.  We did see a few delivery vans that advertised "local fresh produce".  These two women probably wondered why James and I weren't talking.  Eavesdropping can be so interesting.

We still had turkeys in our freezer from raising them last year so we had our farm sitter take one out to thaw before we got home.  It was a big one and I'm guessing it was one of the last ones we butchered because we must have gotten lazy and didn't do a good job plucking it.  I'm going to blame it on Dan because he probably won't see this.  Dan and Amy helped us butcher many of them.  Many people raise white turkeys because you can't see the pin feathers you missed and it's not as unattractive as this one. 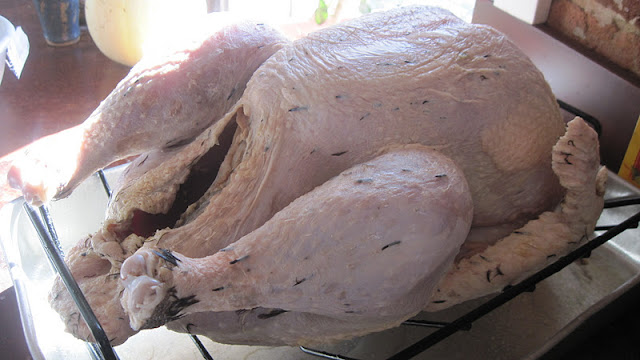 It still tasted good.  It must have smelled really good too because Rosie spent most of the day lying in front of the oven right under my feet.  I don't know if she wanted to be near me, the turkey or it was the only sunny spot in the house. 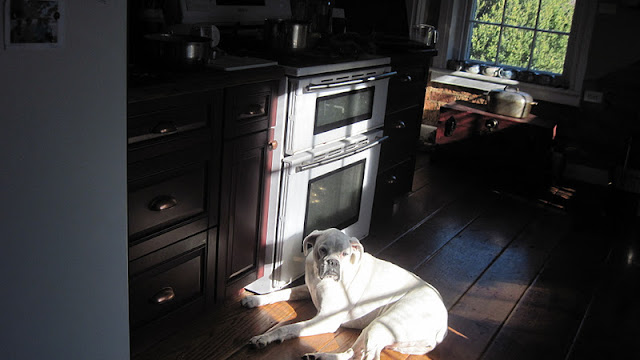 It was such a lovely day we ate outdoors.  I don't think I've ever eaten Thanksgiving dinner outside.  It's been a great week.   I hope it has been for you all too.  Happy Thanksgiving.
Posted by kpannabecker and jpannabecker at Thursday, November 24, 2011