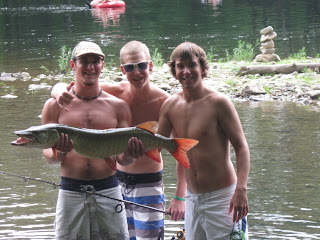 Adam and his friends rarely go down to the river to fish for bass. Their whole reason to fish usually is to catch that darn muskie. Of course there are more than one but they talk about "him" like there's just one. Adam caught one several years ago and has had "him" on his line several times a summer since then but hasn't succeeded in bringing him in. Last night his friend, James, conquered. I've posted some pictures below and a video of them releasing him.
Posted by kpannabecker and jpannabecker at Friday, July 31, 2009