I'm not the only one dealing with an escapologist.  Yes, that's a word.  We're goat-sitting 6 mini lamanchas while our friends deal with fencing issues.  At least 4 of their goats found their neighbors' garden much more appetizing than their own pasture, much to their curmudgeonly neighbors' displeasure.  It's no fun worrying about whether your animals will stay put when you're not there to watch them and whether your neighbor will make your life miserable.

I'm enjoying our guests' company.  They're very quiet goats who mind their own business.  Mostly they keep to themselves and our 2 herds haven't mixed much.  They don't fight, but they don't sleep together either.  I'm pretty sure my boys would be happy to sleep with the new girls and I think the girls would be happy to oblige.  For at least 48 hours the mini lamanchas have been cozying up to the bucks against the fence.  Of course Cooper and Cato are more than happy for the company.  The bucks seem to be in full rut already and the smell is permeating anything nearby.  I don't even need to touch them to feel sticky and stinky.  The only reason the girls aren't vying for Cooper's attention in this photo is because I just gave them apples.  Look how happy Cooper is. 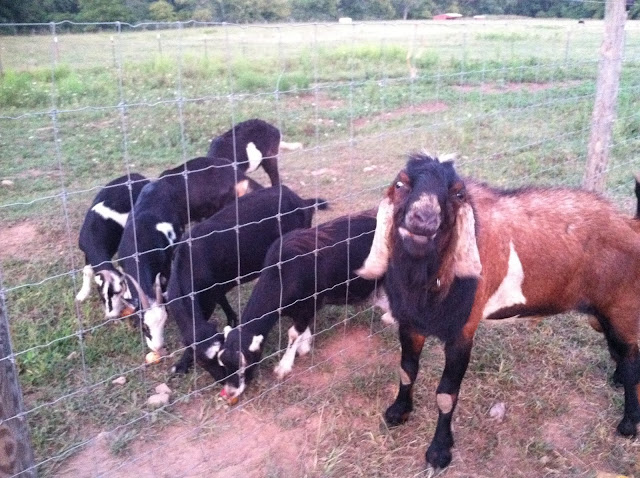 This next picture is from their first morning together when they were trying to figure out how this happened.  It looks like a lot of goats, doesn't it? 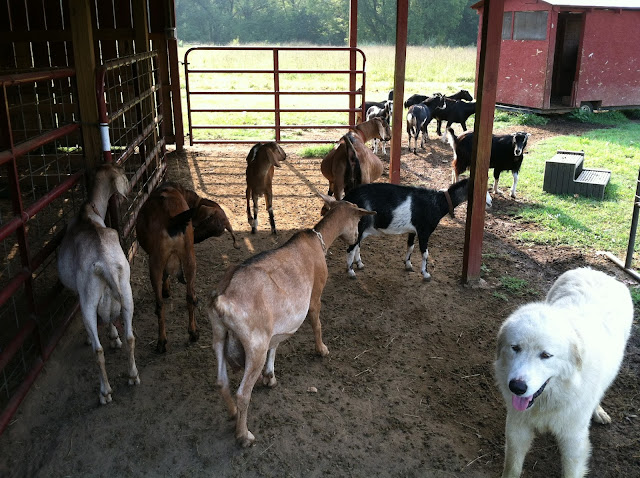 Rex looks like the sweetest, well-behaved guardian in this picture.  Yes, he's sweet and he's very mannerly with me and all the animals but when it comes to staying where he belongs, he's very much like my friends' goats.  He's clever and a royal pain-in-the-butt.

You may remember from a previous post I covered the gates with barbed wire first and then tarps in an attempt to keep him from going over.  I also electrified the wire above the fence and put electricity over the one gate he had climbed.  This past week he decided he could climb the gate down by the river and visit folks.  We were out of town and our friends kept returning him to his fence but he'd just climb back over.  Later in the day we got 2 calls; one from Home Again, the service that stores his micro-chip number and helps him return home.  The other was from the campground one mile down the road.  Rex decided to pay a visit to the campers.  Luckily we have a good friend there who was good enough to put him in her car, drive him back home and tie him on a cable in our yard until we could get home an figure out what to do with him.

On our return we installed more electric wire over the 2 remaining exterior gates so now the entire perimeter is electrified.    So far so good.  I think I said that before when I covered the gates with tarps.  Short of locking him up in our house and only walking him on a leash, I think we've done all you could possibly do to contain him.  Perhaps if he learns to dig we'll have to put a concrete footer below 3/4 of a mile of fencing.  Is it terrible to wish your dog would put some age on and not be strong enough to climb gates?  Micro chipping can be a wonderful thing for animals like Rex.