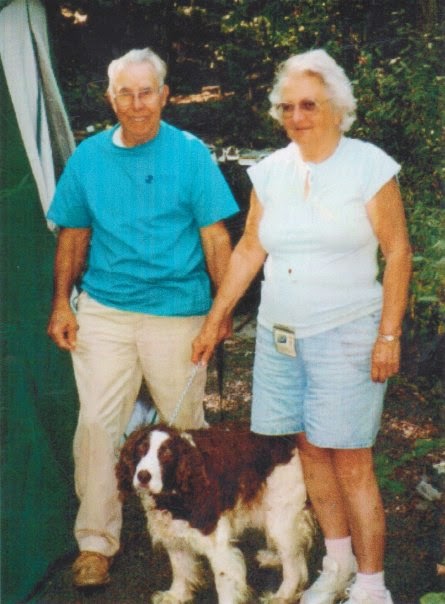 Four days ago I lost the last of my grandparents.  I've found it sadder than I expected.  As some of you may remember I blogged about Pop Pop's 100th birthday we celebrated last year.  What an awesome occasion that was.  Lots of smiles and laughter that day.  So how can I be sad when he lived such a full life and died a peaceful death?  I can't explain it.  My grandparents played a big part in my childhood because they lived just a mile from us.  Pop Pop built the house I grew up in - the house my parents still live in.  Perhaps his death makes me feel like part of my childhood is gone.  I'm no longer anyone's grandchild.  I know that sounds silly.  I mean, how many people in their 50s have grandparents?

Mom Mom and Pop Pop raised 10 children.  They had 25 grandchildren.  Pretty incredible, isn't it?  Many of these cousins also grew up spending just as much time at my grandparents' house as my sisters and I.  I keep in touch with some of them on Facebook.  I've enjoyed reading the stories everyone's been sharing about Pop Pop these past 4 days.  What I find most interesting is the stories we all have to share are funny ones.  There's no denying, we had a really funny grandfather.   I have other pictures of him but I think the one above shows the true character that we all knew and loved.

This is the man who would send someone to the hardware store to get him a wood stretcher or a left handed screw driver.  The clerk always knew who sent them.  My aunt reminded me of how he could keep me staring at a painting of a stream in the woods, convinced a deer would come get a drink if I waited long enough.

Every Christmas Eve. family would file in and out of Mom Mom and Pop Pop's house and visit.  No where was Santa more real than there.  I was so sure he'd come down their chimney.  We had no fireplace or chimney at our house but I was certain we heard Santa and the reindeer on their roof. Pop Pop also tortured us by giving us reasons Santa couldn't make it down the chimney.

He was a sweet man who loved his sweets.  Even in his last week of life he was eating marshmallow peeps.  Circus peanuts?  He was a fan.  One of my cousins shared how he ate 2 blueberry ice cream cones and then was up all night vomiting.  If he ate butter pecan ice cream he'd suck the ice cream off the pecans then spit them out.  His children had to hide their Halloween candy because he'd get into it and pick out his favorites.  When he had a box of chocolates you'd know he'd been into them because each one would be smooshed so he could see what was inside.   If you think eating sugar is going to kill you just remember my grandfather and how he lived to 100.

His daughters should have been as curious as he to look inside things.  It wasn't an odd occurrence for one of them to arrive at school with a rotten apple he'd put in her purse.  Why would he do that?  Because he was a prankster.  We all knew that but still fell for his shenanigans.  Don't all grandfathers put cardboard in his children or grandchildrens' sandwiches?  Or fruit in the hoods of their jackets?

More cousins shared stories I'd never heard.  One was told a small tree would grow faster if she pumped it up.  She stood outside pumping her foot on the ground next to the tree to no avail.  The other was told she should squat down to walk up the steep hills, thus making them twice as hard to get up.  He also pretended his car was stuck in ruts on the side of the road.  Truly, he wanted to entertain his grandchildren.

Sometimes his escapades weren't intended to get a rise out of someone.  He was trying to help, much to someone's dismay.  Mom Mom had a pattern pinned to some fabric.  He "helped" by cutting it out - not on the solid cutting line but on the dotted stitching line.  I can almost hear Mom Mom screaming at him.  He didn't make things easy on her.

My mom told me how she had put her babysitting money in the drawer of her dresser.  When she came home one day he'd stapled the money to the ceiling of her room.  One has to wonder what made him do that.  She also shared how she got a new dress (new to her. Remember she was one of 10.  They didn't get new things often).  It was brown and silky and she must have loved it.  Pop Pop decided to paint her closet.  Apparently he didn't take her dress out and got paint on it.  Ok, so he wasn't always loved every minute of every day :)  Page back up to the top and look again at his face.  Can you see the prankster now?

There must be hundreds more stories to tell.  Like Pop Pop's life, I hate for them to end.

I told one of my cousins, if I'm lucky enough to one day become a grandparent I want my grandchildren to think I'm funny.  I'd be proud to have my grandkids remember me like I remember Pop Pop.
Posted by kpannabecker and jpannabecker at Monday, March 09, 2015