Ok, so it was a bad joke

To those of you who believed my April fool's joke and were worried or mad, I'm sorry.   I seriously thought everyone would figure it out.   I received a few emails, FB messages, texts and a phone call from worried people.  Some saying they were praying for me or concerned.  Also, thank you for the virtual hugs.  I haven't had people this worried about me since I posted "Bad News From The Doctor's Office", as a headline 3 years ago.  Of course, several of you didn't take me seriously because you probably don't believe half what I say anyway, which is probably smart.

Last week I felt like quitting and I know I'll feel like that again but there are too many things I love about raising animals to let a few bad weeks make me give it up.

Lily's two wobbly boys didn't survive.  I'm certain they were premature.  They never did stand, had very soft hooves and had no teeth.  I've milked Lily every morning since her terrible, horrible, no good, very bad day.  She seems to be doing amazingly well, though I watch her like a hawk, so sure she's going to come down with an infection.  She is a wonderful milker and so well behaved on the milk stand.  I'm so proud of her.  She's skinny as all get-out though and I can't wait to see more meat on her bones.

Sunday was another very bad day.  I think it was Friday night when I went out to feed the bottle babies in the middle of the night, I found I had left the extra lock off the feed stall latch.  Remember this?
http://holesinmyjeans-kpannabecker.blogspot.com/2010/09/im-slow-learner.html  Well, I'm still just as forgetful and this time it was more distastrous.  Not only did Luti open the stall but she removed the lid from the trash can and must have filled herself up until she was sick.  I'm sure everyone else helped themselves too but they didn't get sick.  On Sunday morning she was down in a very bad way.  She didn't even want to lift her head.  By late afternoon she was unresponsive and I could hear fluid in her lungs rattling.  I dosed her with Penicillin and Banamine and cried over her and begged her to live.  Luti's only 7 years old and I had hoped to have her around for at least another 3 years.  She's our herd queen and the other goats really rely on her.  I was so sure I'd find her dead the next morning.  I couldn't believe it when I saw her holding her head up.  She was still under the blanket I had covered her with the day before (it was chilly and windy).  She drank two swallows of water and I was never so happy to see a goat drink than I was then.  She couldn't walk because she was so weak but by afternoon she would walk 5 steps then fall.  By nighttime she could go 5 to 10 yards.  Today she's out grazing but she's still very weak and spends more time in the barn than I'd like.  She doesn't want to eat anything but grass and hay.  Well, she did eat a little garlic bread and crackers I offered her, but no grain.  She's also letting her kids nurse and I'm hoping they bring her back into milk because she dried up a lot while she was sick.  I had been bottle feeding her girls while she was down.  I felt very guilty about Luti getting sick because it was all my fault.

Tila is due in a week.  She's our last girl to kid.  Oh, how I hope she has only one kid and all goes smoothly.  I'm tired of our kitchen table looking like this.  I don't want to see a syringe for a long time. 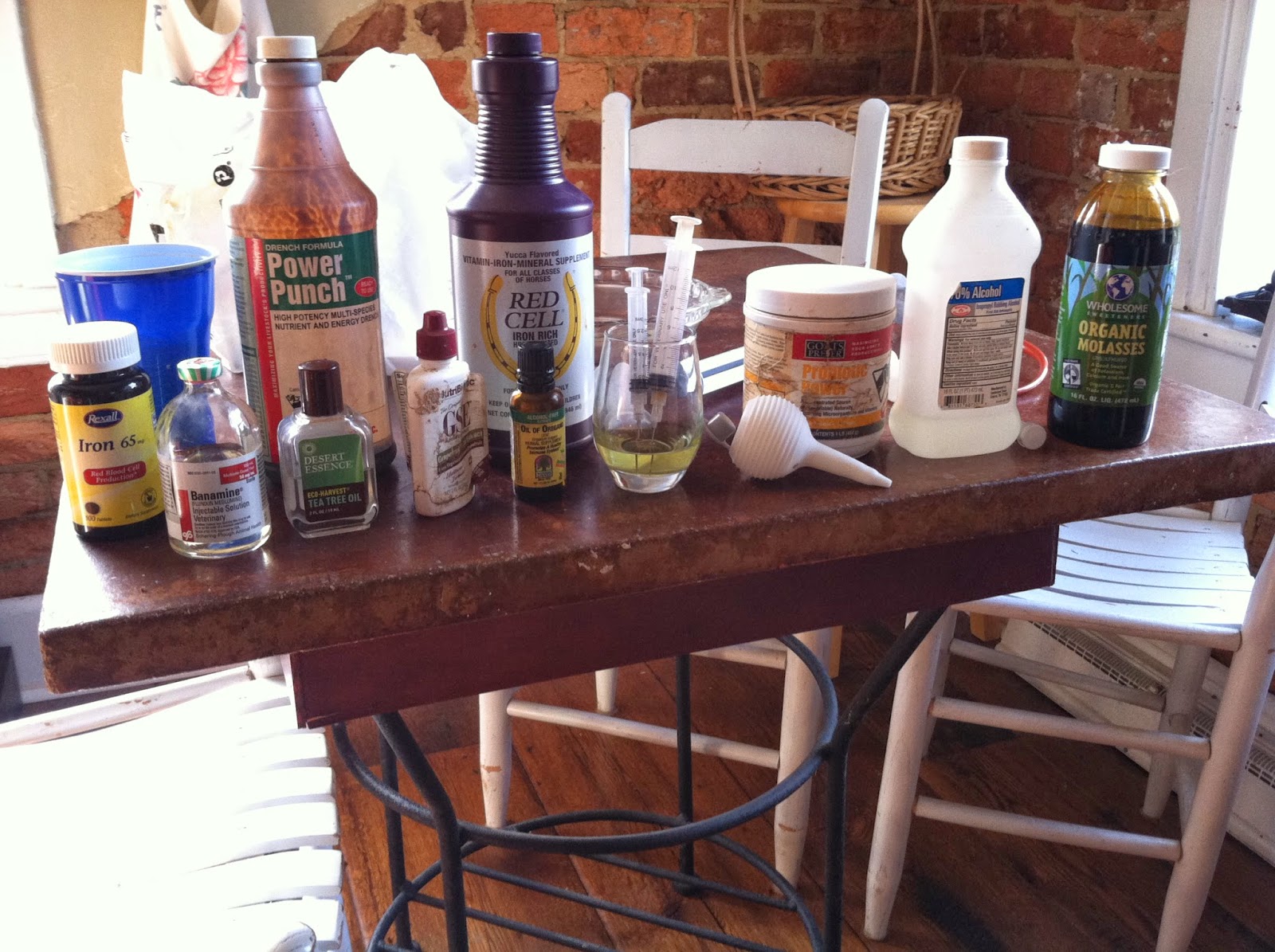 I questioned what kind of master I was to my goats this week and can't imagine how I could take care of them if I had to work outside the home and leave them every day.  I don't know why this year was so much harder.  A friend told me to expect a bad time of it every 3 years when farming.  I need to go back and look at my blog from 3 years ago and see what happened.