Wassee's name lends itsself to nicknames, I think.  Sometimes I call him Wassee Wasserman or Wasseemoto.  Right now I need to call him Wassee-we-want-you-well.  After the new piggies arrived I noticed how much slower Wassee moved and how he didn't have the energy they did.  He also had diarrhea so 2 days ago I moved him up closer to the house where I could give him special attention and he wouldn't spread any diseases to the others.  He's living in a chicken coop surrounded by a kennel.  He spends most of his time burrowed under the hay in the coop though.  I dewormed him, gave him an something to treat bacterias like e coli and have given several servings of yogurt but still he has runny poop.  Yesterday I gave him some Peptol Bismol so I hope that helps.  He loves to have his tummy rubbed.  I'm sure it feels good on his achy stomach.  He's become so sweet since we spend so much time together.   I thought a bath would do him good; get that poop off his butt.
He seemed to enjoy it.


After his bath he got his yogurt. 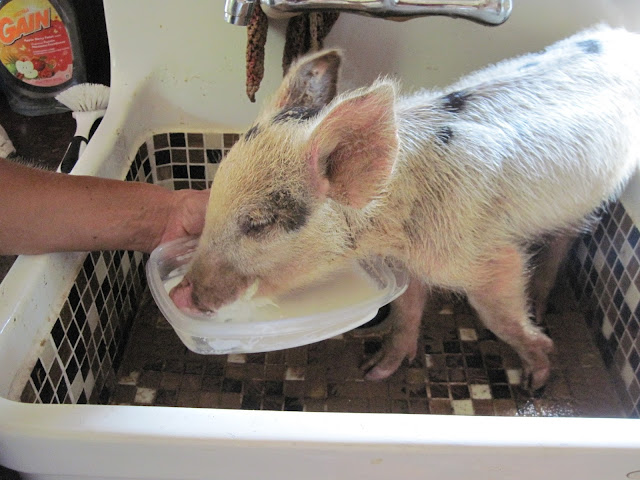 Mickey and Wendell (as in Wendell Berry) are just as friendly as Wassee.  As a matter-of-fact it's hard to visit them and Roxie without being plowed over by them.  They all want scratches or belly rubs.  Here are a few videos from last night.   Pigs are forever rubbing against things for a scratch.   This one made me smile.

The 2 of them came over for rubs and as soon as I reached under them to rub their stomachs they rolled over so I could do a better job.  I need more than 2 hands to video and rub two tummies.

This morning Wassee wasn't interested in his yogurt or bread.  He talked to me but didn't reallly want to  get out of bed.  I need to consult some pig experts today.