My Mid Atlantic Minis Yahoo goat group is having a costume contest for our goats.  Winner gets $35.00.  I doubt anyone participating cares if there's a prize or not.  It's just fun.  We don't get trick-or-treaters here so this is about all the Halloween celebrating I do, dressing up my animals.  For those of you who missed last year's 10/30 post, here's a link http://holesinmyjeans-kpannabecker.blogspot.com/2011/10/hippy-halloween.html
I can't use the same costume as last year so today I began experimenting.  It's not easy to dress up a goat so I thought I'd do a dress rehearsal on one of my most patient and devoted buddies, Lex.  He's an angel, don't you agree? 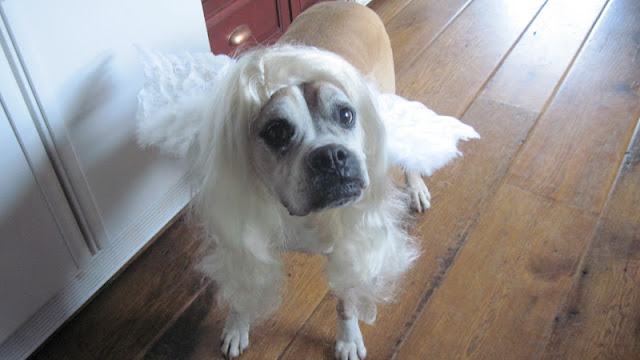 I think he needs a white robe.  I don't know if I can get a goat to let stand still to put 3 pieces of clothing on it.  We'll see.

I'd really love to dress up one of the pigs too.  They're so darn cute but they rarely stand still unless I'm giving them a good scratch or in Calvin's case, a tummy rub.  Yesterday I was doing work in the field and I was worried the boy goats would get in the way but it was the pigs who were more curious about tools.  My drill was covered in mud from them gnawing on it with their muddy noses and mouths.  They got tired of me after awhile but still wanted to be close and took a nap next to my wagon.  I couldn't resist and snapped a picture with my phone.  They really are pretty affectionate creatures. 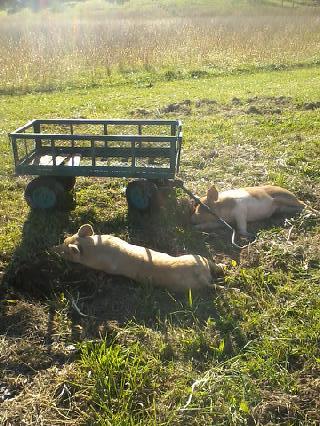 Anyone have any ideas for goat costumes?  Or other animals.  Donkeys are also fun to dress up.
Posted by kpannabecker and jpannabecker at Wednesday, October 17, 2012