I love the whole idea of recycling even though sometimes it's an inconvenience.  I feel guilty if I throw away something that can be recycled but occasionally I do it anyway.

I'm feeling pretty good about my most recent recycling though.  A friend of mine called me and asked if I wanted some roosters.  Well, I don't need any roosters for my hens but of course my interest was piqued.  Tommy knew a guy who was just shooting his roosters because he didn't want them.  He wasn't eating them.  I hated seeing them go to waste so I said I'd take them and butcher them and put them in our freezer.  Supposedly they were under a year old but I really had no idea if they'd be tough or not.  I went to Tommys to get them and he added a few of his own he wanted to get rid of.  There were 9 in total.  I didn't have time to butcher any of them that day but thought I'd do a few the next.

I woke up feeling kind of puny and knew I couldn't kill a bird without puking.  It would have to wait till another day.  Meanwhile the roosters are in a very roomy shed with food and water.  The next day I had people coming to look at goats and I was still feeling tired and not up to par.  I also wanted to go see Susan's new lamb so there was no time to process roosters.

So here it is 3 days later and the roosters are still in my shed and I'm feeding them like I feed all my other chickens so I posted an ad on Freecycle.  I've gotten a big response to the ad and someone is supposed to come tomorrow and pick them all up.  They plan to put them in their freezer.  I feel a sense of relief that I don't have to do it.  I know I'll have plenty of roosters hatching from my incubator in the next few days (if all goes well) and will have to deal with them when the time comes.  Hopefully I won't be sick.

Once again I'm singing the praises of freecycle.

One of these roosters is really pretty and I'm tempted to keep him if he's nice.  We'll see. 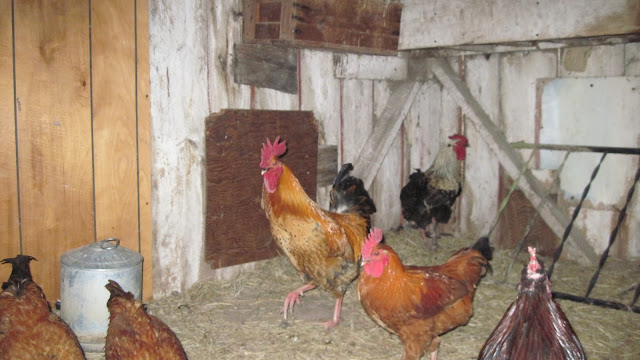 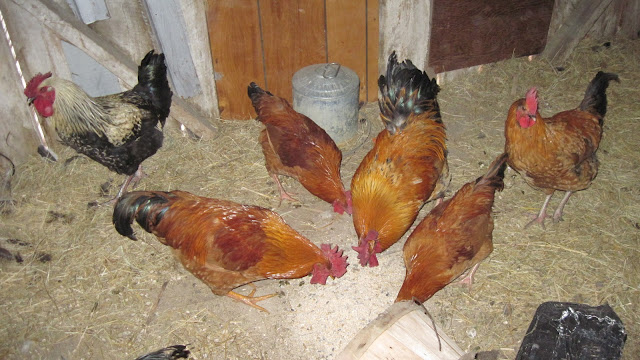 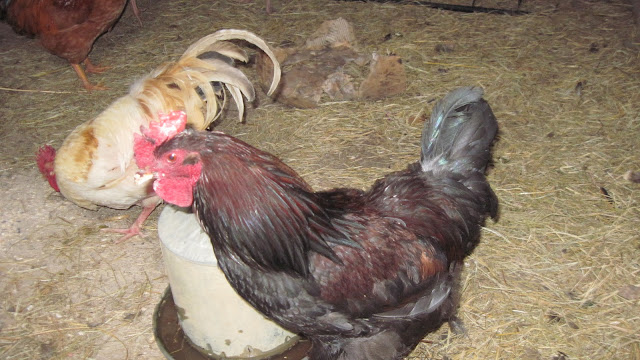 Roosters are such pretty animals.  It's too bad they don't lay eggs and get along with everyone.
Posted by kpannabecker and jpannabecker at Sunday, March 20, 2011