Changing of the guard

I know I've spoken many times on this blog of how good Keri was at her job.  She may have let me think I was the boss, but she probably knew way more about the goings-on in the field than I.  I had no idea how much I'd learn about guardian dogs until we had Keri.  While all our house dogs have been loyal and loving, it's a different kind of relationship than with a guardian dog.  I think Keri would truly have given her life for me and James and the goats.  I won't go on anymore about her as a guardian because I've probably written it all before.

Yesterday was tough.  When I went to the barn I could see she was in pain.  It was hard for her to walk and even lie down.  She couldn't get comfortable and she had no appetite.  She didn't even scold the cows when they were where she doesn't like them, in my way.  James called the vet because I knew I'd cry when I made the dreaded appointment.  They said they could take her at 5:15 so we had
all day to think about it.

Keri loved being in our station wagon, though she hardly ever got to ride in it.  It meant she had me all to herself and she didn't have to share me with the others.    So at 3:00 I picked her up from the field, helped her in the car and drove back to the house.  We sat in the driveway with the doors open for more than an hour and a half and cuddled.  She was uncomfortable but happy.  James came out and she had one of us at each end of her.  I'm pretty sure this was heaven for her. 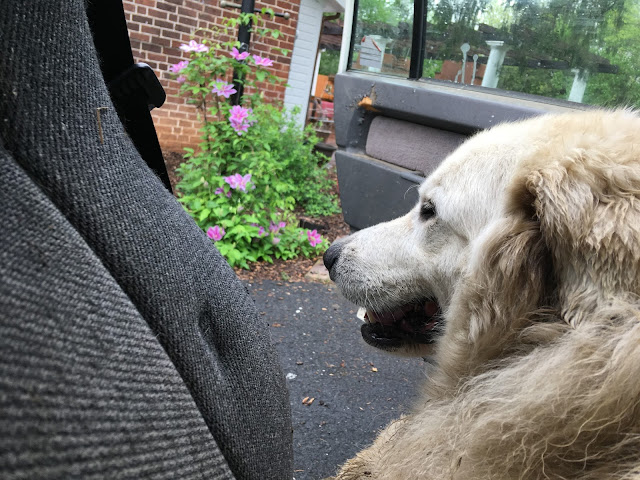 We headed to the vet with Keri in the back seat.  Even though it was chilly we put the window down for Keri so she could stick her head out when she wanted. 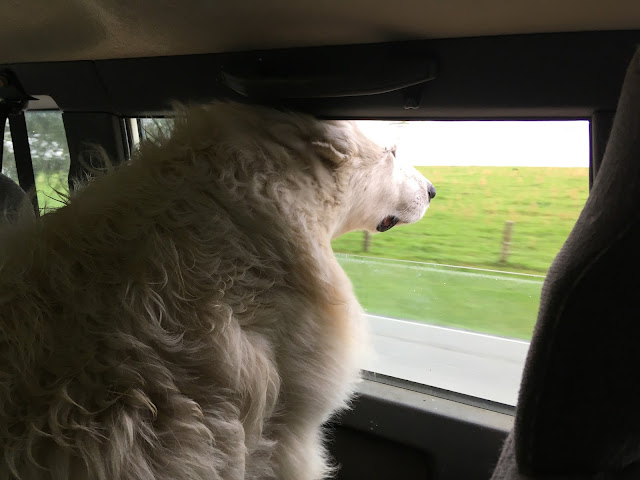 As always, the vets were kind and gentle with Keri and patient with my blubbering.  It was all very peaceful.

I wondered how Rex would be this morning.  When he didn't greet me at the gate I got a bit panicky.  I was afraid he'd climbed over the fence to find Keri.  I called him and he slowly came out of the barn.  He's never done that.  He's always waiting for me.  He went back to his corner and laid back down.  He wasn't interested in his food and he was grumpy with the cows.  I've never seen him boss the cows like that; like Keri, his teacher, did.  It will be interesting to see how he takes over now.  I gave him some extra loving today and told him he was in charge now.
Posted by kpannabecker and jpannabecker at Wednesday, April 26, 2017