This is what greeted me at the gate this morning. 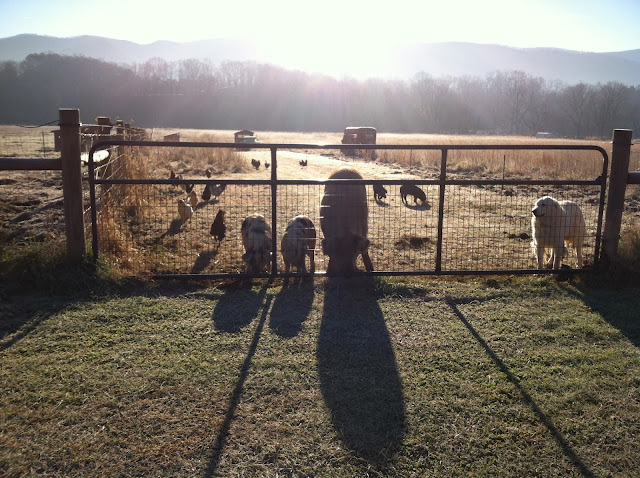 The tall grass to the right is where the pigs belong.  My solar battery must not be electrifying their single ribbon fence and this made for some chaotic feeding, a little snarling and a lot of shoving.  The goats were smart and stayed away.  I think they're afraid of Roxie.  Even I was a little unnerved by her this morning.  She followed me everywhere and was a little more mouthy than usual.  I'm afraid I spoke too soon in my last blog post.  I'm pretty sure Roxie is in heat and my AI was a failure.  I did some reading and discovered the reason she came back into heat so late in the month.  Her body waited a few days to terminate the pregnancy, I guess.  I'll now probably wait for Wendell to grow and take over the job of inseminating.

So, the reason she was following me so closely was because she's in heat and she's a little amorous this time of the month, mostly with me.  I even carried a broken shovel handle to pop her in the nose if she became too rough with me.  At one point I was bent down checking out the solar battery and Roxie put her giant nose against my leg and held it there for a while.  I don't know what she was doing but it was cute.   I kept waiting for her to bite me though.

Keri is not at all thrilled with Roxie being on the move.  The young pigs don't bother her but I think she's concerned Roxie will hurt her goats.  Any time they're near each other Keri gives her a vicious bark.  Sometimes Roxie pushes back but most of the time she walks away.  I don't know if Keri realizes Roxie has a 500 lb advantage and could do some serious damage.  Sometimes I thought Roxie was hanging around just to piss her off.  Keri once barked at her and she laid down not more than 10 feet from Keri, looking not at all concerned.

I did some repair to another solar charger today so I will replace the one that doesn't seem to be working.  One of my best discoveries this year is liquid tape.  It's probably been around forever but it's new to me.  It's way better than using electric tape for repairing the damaged wired from where animals chew on them.

We relocated the chicken coop because the chickens also decided to leave their fence.  They kept walking in the road and cars would have to stop for them.  I was afraid folks were soon going to complain so we moved them.  It took them 2 days to figure out where they were supposed to go to bed.  I think they've got it now and so far I haven't seen them in the road again.

Even though it's cute seeing the animals hang out together (sometimes), it makes feeding much harder and I really need to get pigs back where they belong.  I saw the pigs had been doing some rooting in the house the goats sleep in and I hope they haven't kicked them out. 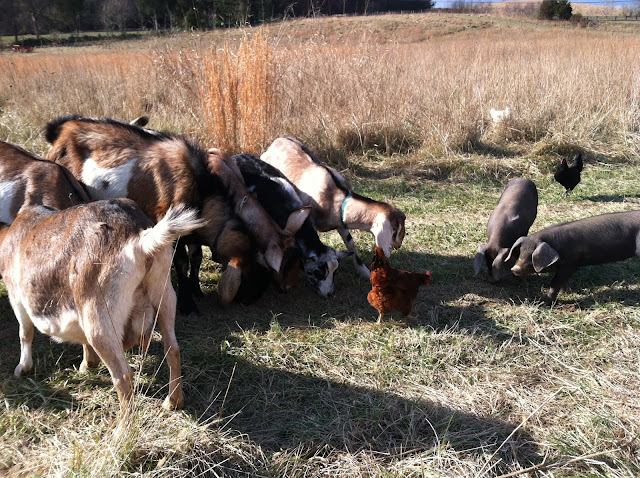 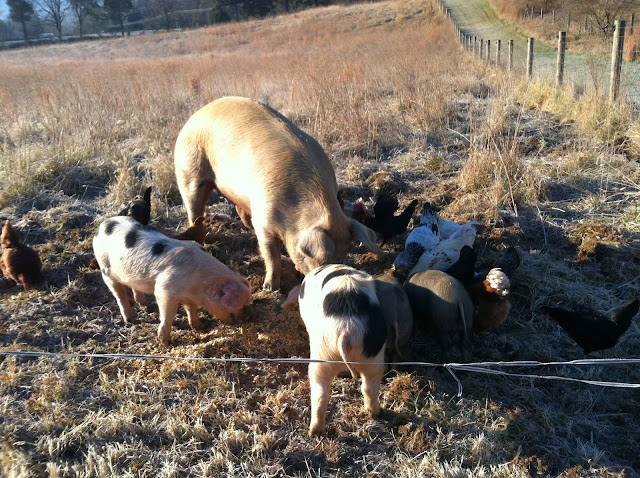